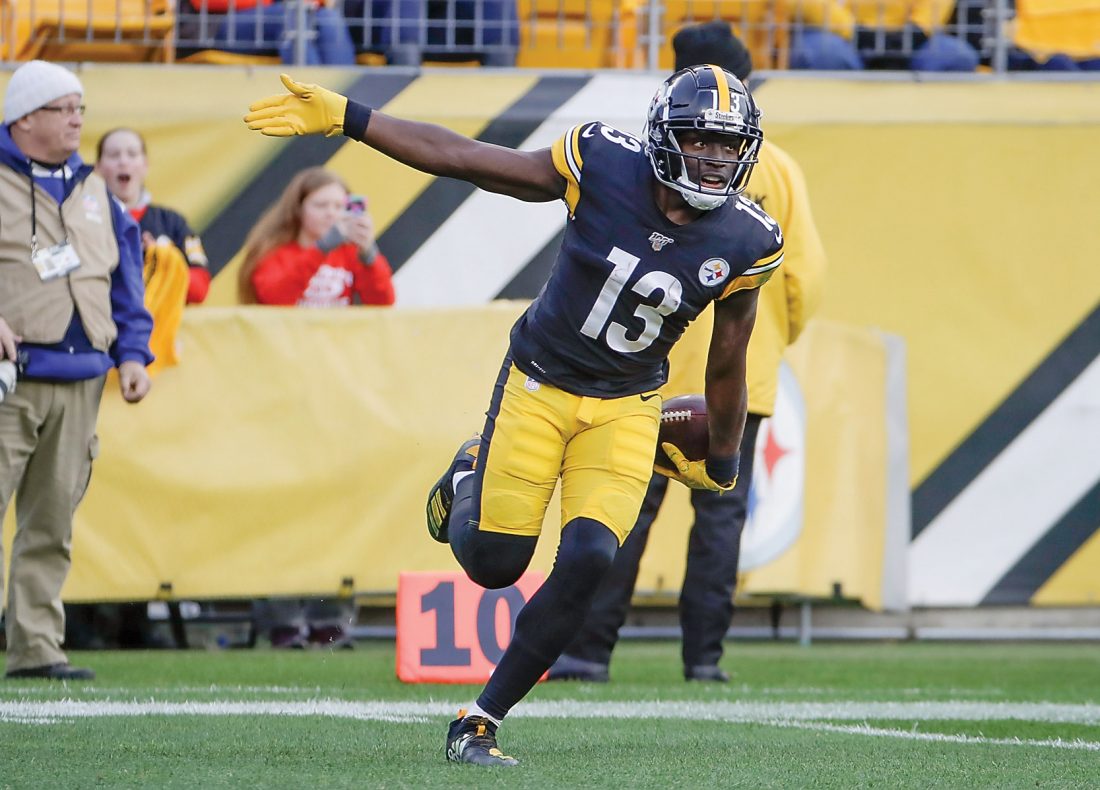 PITTSBURGH — James Washington knew what was coming. It’s why the Pittsburgh Steelers wide receiver didn’t hesitate when he saw the Cleveland Browns jump offside early in the second quarter on Sunday.

At the snap, Washington ditched his intended route and raced upfield. Call it the byproduct of spending plenty of practice time catching passes from rookie quarterback Devlin Hodges.

“You just go deep and hope he throws it your way,” Washington said.

And Hodges did, lofting a rainbow down the left sideline that Washington caught for a 31-yard gain that provided the spark Pittsburgh’s sputtering offense needed to come to life.

Washington and Hodges — newfound hunting buddies — were in the middle of it all. An acrobatic 30-yard touchdown grab by Washington late in the first half tied the game. A 44-yard strike early in the third quarter set up Benny Snell’s 1-yard score that put the Steelers ahead to stay in a 20-13 victory that kept them in the thick of the AFC playoff chase.

Washington finished with four catches for a career-best 111 yards, displaying the kind of game-breaking ability that led the Pittsburgh to take him in the second round of the 2018 draft. After a season and a half of progressing in fits and starts, Washington appears to have developed a rapport with Hodges that he couldn’t find with Ben Roethlisberger or former college teammate Mason Rudolph, who was benched last week in favor of the player known universally as “Duck.”

Maybe spending time together in the woods helps.

Washington and Hodges went duck hunting last week with Hodges — a champion duck caller on the side — luring them in and Washington — who grew up around farms in Texas — taking them out. They plan to do it again on Tuesday to celebrate Pittsburgh’s sixth win in its past seven games.

“I tell him I’m a better shooter than he is, so you call them in and I’ll shoot ’em,” Washington said. “That’s kind of how it works.”

Hodges admitted the outings with Washington makes things “a little more comfortable” on the field, though he stressed there’s no need for the rest of his teammates to put on their camo if they want to create a vibe with him.

“We all have our different types,” Hodges said. “So I’m just trying to fit in with those guys and doing whatever it takes to build that relationship. It makes it a lot more calm in the game.”

Hodges certainly looked calm while completing 14 of 21 passes for 212 yards with a touchdown and an interception. He will get another start on Sunday when the Steelers visit Arizona (3-8-1) and is building a pretty compelling case to be given the nod the rest of the way. The Steelers are 3-1 when he makes an appearance, the only loss coming to Baltimore back on Oct. 6 when wide receiver JuJu Smith-Schuster fumbled in overtime.

Hodges wasn’t perfect. He fumbled out of bounds while attempting to scramble early in the fourth quarter and threw a pick when he tried to go deep to Diontae Johnson with the Steelers protecting a seven-point lead with 7:30 to go. Still, he wasn’t fazed by the stakes.

“Duck stayed calm the entire time,” Washington said. “You never saw him get uptight or anything. He held his composure as well as everyone else. Everyone kept working and I feel like that’s why we were able to come out on top.”

The pass rush remains dominant, with outside linebackers T.J. Watt and Bud Dupree leading the way. They’ve combined for 20¢ of Pittsburgh’s 43 sacks, adding 2¢ to that total against the Browns.

The offense committed four procedure penalties, be they false starts or illegal shifts. Part of that is the growing pains that come with having an inexperienced quarterback. But the Steelers lack the kind of explosiveness at the skill positions to easily overcome even the most minor of setbacks.

The Steelers drafted Benny Snell in the fourth round in April because of his no-frills running style. It’s starting to translate to the NFL. Snell has run for 161 yards and a touchdown over the past two games, his ever-churning legs frequently making it difficult for the first defender to bring him down.

Rookie wide receiver Diontae Johnson has been a pleasant surprise for most of the season, but he gave up on his route when Hodges overthrew him in the fourth quarter on Sunday. The decision to pull up let Cleveland’s Terrance Mitchell put together a 28-yard interception return that nearly cost the Steelers dearly.

The Steelers escaped their highly anticipated rematch with Cleveland relatively unscathed. Reinforcements could be on the way this week with Smith-Schuster (knee) and James Conner (shoulder) possibly nearing their respective returns after missing each of the past two games.

34 — the yards Kerrith Whyte gained on his kickoff return in the first quarter, the longest return by the Steelers this season. Whyte’s north-south instincts were a welcome development after a series of players used before him struggled to produce anything positive in the return game.

Assuring the franchise of a 16th straight non-losing season by beating the reeling Cardinals.

The Associated Press PITTSBURGH — The Pittsburgh Steelers are united heading into the 2020 season. Yet even ...

Loss leaves Pens down 2-1 in series

From Mirror, wire reports TORONTO — Jeff Petry scored 5:33 into the third period as the Montreal Canadiens ...