Injury-riddled unit sputtering to the finish 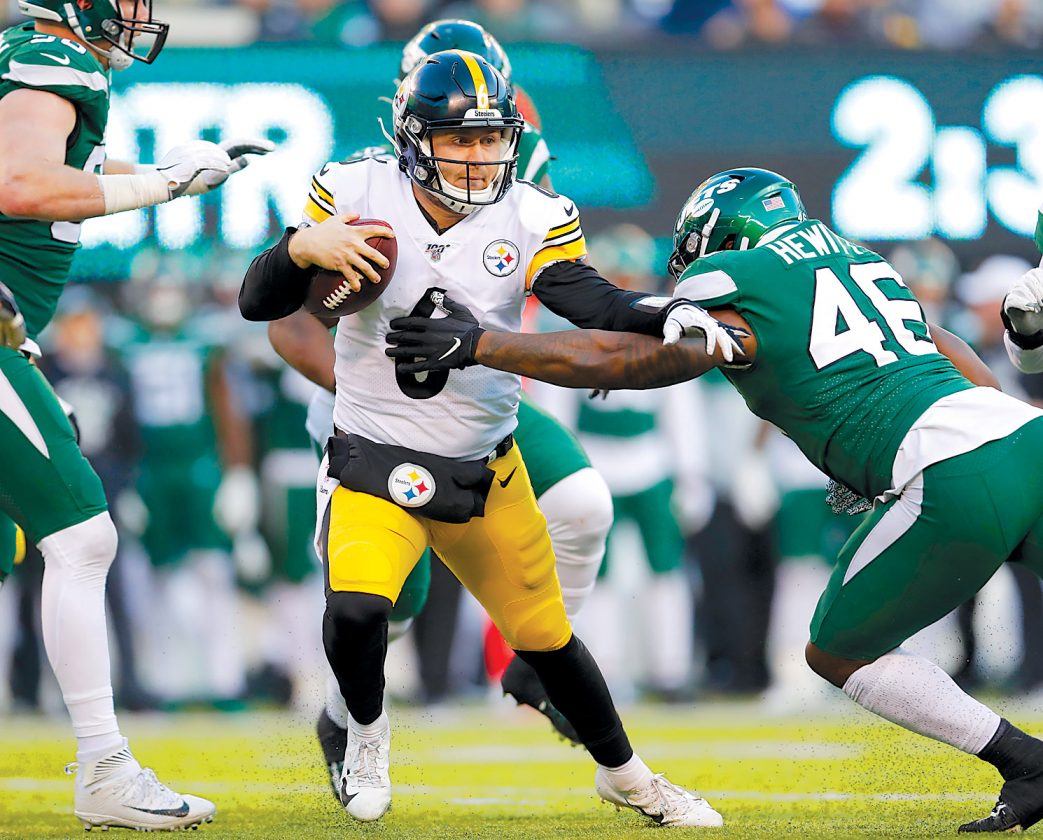 PITTSBURGH — Paxton Lynch hasn’t thrown a meaningful pass in two years. Yet there the Pittsburgh Steelers backup quarterback was on Monday, getting bombarded with questions about whether he’s capable of stepping in and helping lead Pittsburgh to a playoff berth.

“Whatever they need me to do, I will be ready to do,” Lynch said. “That is why they brought me here, to help this team win if I was called upon. So that is what I am going to be ready for.”

The fact Lynch — signed to the practice squad in September — is even in the mix is a fitting symbol of Pittsburgh’s unwieldy season. The magic of rookie undrafted free agent Devlin “Duck” Hodges has faded under a sea of interceptions.

Mason Rudolph’s enigmatic year shifted direction twice in the span of 90 minutes during a loss to the New York Jets on Sunday. He came on in relief of a mistake-prone Hodges in the second quarter, immediately helped Pittsburgh rally from a 10-point deficit to tie the game only to spend the final minutes on the sideline after injuring his left shoulder.

Steelers coach Mike Tomlin offered only “stay tuned” when asked postgame who will get the nod when Pittsburgh (8-7) visits Baltimore (13-2) next Sunday. Given what the quarterback — whomever it is — might have to work with, the choices appear negligible.

Running back James Conner’s status is uncertain after he left with a quad injury. Center Maurkice Pouncey walked around with a limp and his left knee in a brace on Monday after going down in the second half against the Jets. Wide receiver JuJu Smith-Schuster hardly looked anywhere close to 100% while catching just two passes for 22 yards in his return from a knee problem.

Though the top-seeded Ravens have already said they’re going to sit star quarterback Lamar Jackson and the majority of the bold-faced names on offense with home field already clinched, Baltimore still might have enough firepower to edge out the Steelers, who have scored multiple offensive touchdowns in a game just once since Halloween.

“These last two games there’s been somewhat of a playbook, we get down early, we spot (them) points and they can play keep-away for most of the game,” Pittsburgh defensive end Cam Heyward said. “But I look on attacking that. Making sure we don’t surrender touchdowns early. Offense is going to put up some points this week.”

Heyward spoke with confidence, yet the reality is the Steelers’ margin for error is nearly invisible. The fact the postseason is still in play is a testament to Tomlin’s relentless optimism and a defense that times has been better than the offense at finding the end zone.

Pittsburgh has four defensive or special teams’ touchdowns this season, all of them coming in games they won by seven points or fewer. They might have to do it one more time for their somewhat complicated path to the playoffs — regardless of what happens in Baltimore, Pittsburgh needs Tennessee to lose in Houston — to clear up.

“Only scenario that matters is if we win,” Heyward said. “That’s how I see it. I’m not looking for anybody else to do the job. I know we’ve got to look for help but the job’s got to get done in here.”

The defense has allowed fewer than 300 yards in six consecutive games and recovered nicely after allowing the Jets to go 75 yards on their opening drive Sunday, giving up just 186 yards the rest of the game. Barring a complete meltdown against the Ravens, the Steelers will finish in the top five in the league in yards allowed, points allowed, sacks and turnovers.

Outside linebacker T.J. Watt is making a spirited run at the NFL Defensive Player of the Year award. Watt’s strip sack of New York’s Sam Darnold on Sunday gave him 14 on the season, tied for the third-most in franchise history. Watt is just the third player since 2008 to have at least 14 sacks, 14 tackles for loss, 33 quarterback hits, seven forced fumbles and four fumble recoveries.

Smith-Schuster’s injury-marred season took another difficult step back against the Jets. He failed to come down with a late heave from Hodges — the ball sailed over his head — that would have given the Steelers the late lead. Pittsburgh will try to sign him to a long-term deal in the offseason, but the price appears to be dropping precipitously.

Conner, who spoke with reporters on Monday, appears to have a solid chance to play in Baltimore. Rudolph’s injury was to his non-throwing shoulder while Pouncey’s season might already be over.

3: the number of rookie wide receivers in franchise history to finish with at least 50 receptions in their first season, a list that includes Diontae Johnson, who leads the team with 55 catches.

Beat the Ravens in Baltimore for the third straight season and hope the scoreboard relaying information from Houston is positive.

LOS ANGELES — Kobe Bryant’s wife remembered him as a devoted father and husband who arrived early for school ...