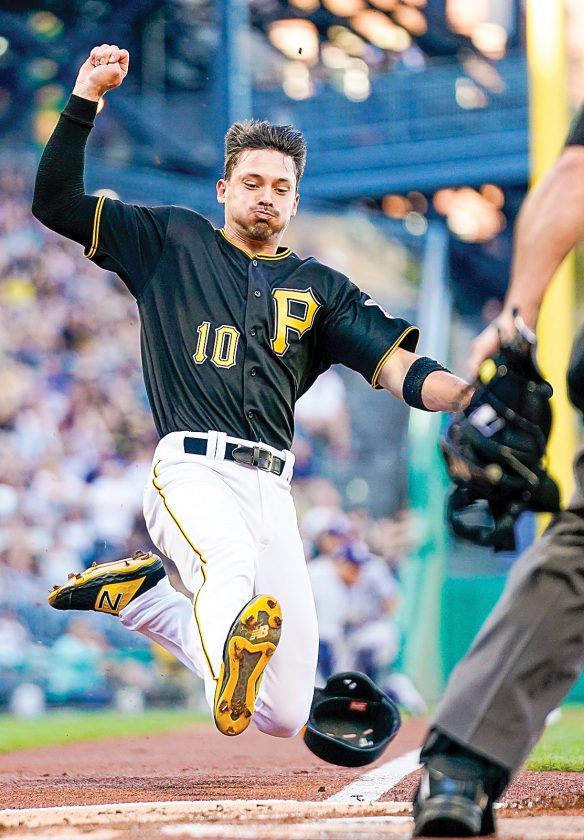 PITTSBURGH — It wasn’t the aim of Pittsburgh Pirates rookie outfielder Bryan Reynolds to set the Major League Baseball world on fire when he was summoned by the Bucs as an injury replacement in mid-April.

But he has done it, anyway.

After arriving in Pittsburgh on April 20, Reynolds began his major-league career with an 11-game hitting streak.

He also put together a club-high 17-game batting streak later this past spring.

While outfielder Andrew McCutchen — the player that Reynolds and reliever Kyle Crick were acquired for in a January 2018 trade with the San Francisco Giants –was a storied part of the Pirates’ past, Reynolds is one of the shining hopes for the team’s future.

“I didn’t have any set goals (after first arriving in Pittsburgh),” the soft-spoken Reynolds was saying at PNC Park Friday before the Pirates started their three-game weekend series with San Diego. “I just wanted to play the game the way I know how to, and let the rest take care of itself.”

Reynolds, a Tennessee native who was a member of Vanderbilt University’s 2014 NCAA championship baseball team, has adopted a concise approach at the plate. He’s quick to the ball with his bat, and drives the ball well to all fields.

“I just try to keep it simple,” said Reynolds, who played only 13 games at Class AAA Indianapolis this year before getting called up by the Pirates. “Get a good pitch to hit, put the barrel on it, and let the rest happen. I’m obviously happy with the way things have gone, and I’m just trying to stay within myself. I don’t get caught up in what everybody has to say. I just kind of play the game, and I don’t worry about anything else.”

Veteran left fielder Corey Dickerson, one of the three Pirates’ outfielders on the team’s injured list prior to Reynolds’ April call-up, has been sharing some of his accumulated knowledge with Reynolds, but was quick to point out that Reynolds is a self-made player.

“It’s great to see,” Dickerson said. “I talk to him all the time, but all the credit is his. He has an even keel, he never gets too high, or never gets too low. He approaches the game the same way every day. He’s calm, and the demeanor that he puts out is that he’s very trustworthy of his ability. That’s a unique trait.”

Reynolds hasn’t shown opposing pitchers anything to exploit in the early going.

“It takes some time for (other) teams to figure out your weaknesses, and right now, he’s so simple, it’s really hard for them to find any weaknesses,” Dickerson said. “He’s direct to the ball. He doesn’t have a big leg kick, or a bunch of movement with his hands. He puts his foot down, he sees the ball, and he hits the ball.”

Reynolds was humble in his assessment of the streak.

“I was just seeing (the ball) well, putting the barrel on it, and I got lucky a few times,” Reynolds said. “I’ll take them (hits) as they come.”

Reynolds’ 11-game batting streak from April 20 through May 4 matched the longest by a Pirates rookie since right fielder Gregory Polanco also put together an 11-game streak in 2014. The quick start gave Reynolds a surge of confidence.

“I think it gave me some confidence early on that, you know, I can do it, I can play here, I can hit these guys,” said Reynolds, who missed nearly two months of his 2018 Class AA season with the Altoona Curve because of a broken hamate bone in his left hand.

If there was ever any doubt about Reynolds’ ability to play in the major leagues, he has dispelled it quickly and thoroughly, and with several key, clutch hits along the way. His two-run, 11th-inning home run triggered the Pirates’ 6-4 road win over the Texas Rangers at Globe Life Park April 30, and his three-run homer in the sixth inning completed the Pirates’ comeback from a 7-1 deficit for a thrilling 8-7 victory over the Detroit Tigers this past Wednesday at PNC Park.

“It’s amazing, it’s special,” Pirates’ shortstop Kevin Newman said of Reynolds’ play this year. “He’s going out there and leaving it all on the field, and it’s really exciting to watch. He’s killing it.”

Reynolds has also been solid, and sometimes spectacular, defensively while playing all three outfield positions. He has committed only one error in 88 chances, and recorded three assists.

“He’s made some plays out there that have been fun to watch,” Pirates manager Clint Hurdle said.

If Reynolds keeps up his high quality of play through the rest of this season, he would be a strong candidate for the National League’s Rookie of the Year Award.

But he isn’t the least bit concerned about that at the present time.

“We’ve got a long way to go, I’m not worried about that,” Reynolds said. “I got an opportunity here, and I’ve just tried to grab it, hold on, and take advantage of it. I’m just happy to be here, and I want to stay here for as long as I can.”

2019 season: While playing all three outfield positions for the Pittsburgh Pirates since making his debut on April 20, Reynolds has carded a .354 batting average — tops among all Major League rookies and second only to Colorado’s Charlie Blackmon in the National League overall during that time span — while hitting six home runs, 15 doubles, two triples, and driving in 26 runs .

Season highlights: Reynolds has compiled hitting streaks of 17 and 11 games, and has helped the Pirates win two games with decisive home runs.

INDIANA — Tussey Mountain junior 126-pounder Hunter Horton seems to have saved his best wrestling for the ...

EBENSBURG — One year removed from falling in the District 6 Class 1A finals, the Bishop Carroll boys basketball ...

WILLIAMSBURG — Adam Uplinger helped save what looked to be a sinking ship of Pirates on Friday night. The ...