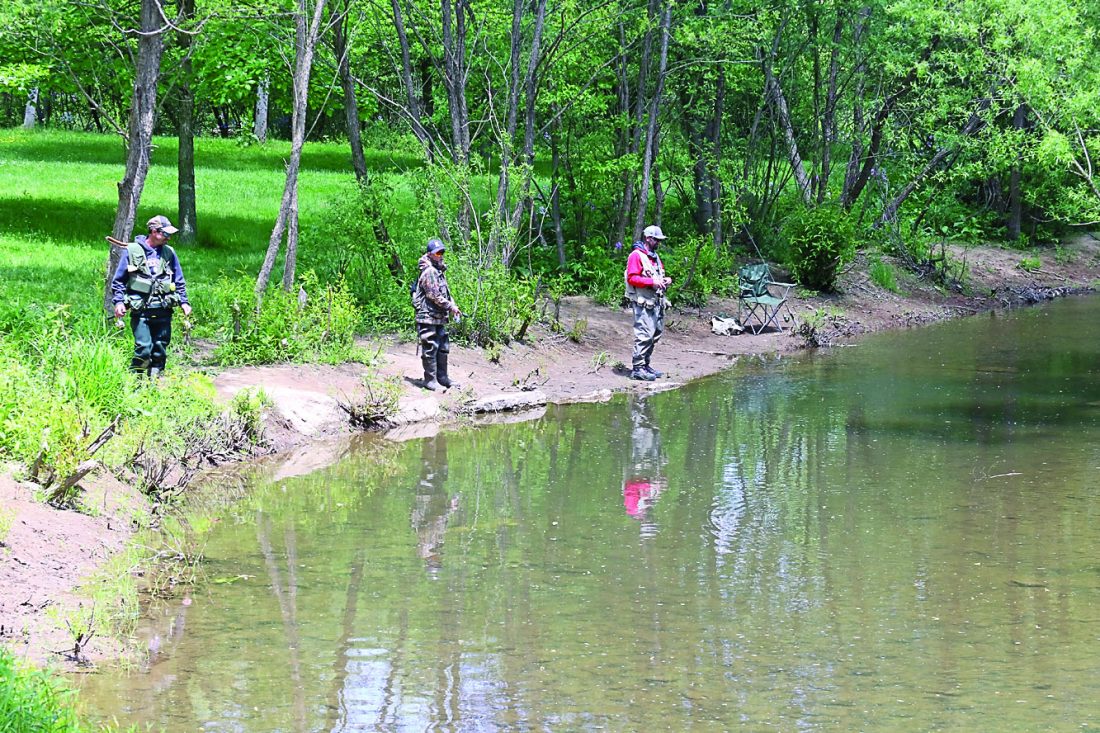 The Bald Eagle Creek Trout Tournament is truly a collaborative, community event. Held under the direction of members of the Bald Eagle Sportsmen’s Club, the trout tournament celebrated its 22nd anniversary last month with the unfolding of this year’s event on May 30-31 over a seven-mile stretch of the Big Bald Eagle Creek near Port Matilda.

The Port Matilda Sportsmen’s Club was the host site for the event.

This year’s tournament again offered the chance at big prize money for the approximately 575 participating fishermen ranging in age from pre-teen to the mid-70s, thanks to the continued generosity of area business and individual sponsors who backed the project financially by donating money that resulted in the 590 stocked rainbow trout being fitted with tags ranging in prize value from $20 to $1000.

The total prize money donated by sponsors for this year’s event was $15,155.

All proceeds from registration money and, in certain cases, some of the sponsorship money, benefited the Bald Eagle Sportsmen’s Club and its fishing nursery, which the club operates as part of a co-op arrangement with the Pennsylvania Fish and Boat Commission.

Members from the Bald Eagle Sportsmen’s Club also place the fish in several other streams that would otherwise remain unstocked, expanding the number of fishing opportunities for hundreds of area anglers.

“That’s why we do this,” Mark Jackson, 56, of Warriors Mark, said of the Bald Eagle Creek Trout Tournament that he started 22 years ago along with his younger brother, John, now 42, who lives in Milesburg. “In the end, the proceeds from this tournament reach a lot of anglers throughout central Pennsylvania because we’re raising money to raise 50,000 trout to stock in area streams and children’s fishing derbies around the area.”

The Bald Eagle Trout Tournament also offers the prospect of a substantial windfall to the registered participants who pay a nominal fee of 40 dollars or less to fish in the event.

Thanks to the generous community sponsors, in this year’s event, three fishermen who each caught the largest trout – each fish measured an identical 17 ¢ inches – split a prize of $1650, with each fisherman taking home $550.

There was also a fish caught with a tag placed in its back that was worth $1,000 – the biggest single prize won – and another fish, known as a community fish, that yielded another lucky angler $479. Robert Golding of Hanover caught the $1000 trout, which was sponsored by M&T Bank.

Special regulations were in effect at this year’s event because of the COVID-19 pandemic. Social distancing was observed, and facemasks were required as people drove through the grounds in their cars to register and to collect their prize money. Rather than bringing their fish in live this year, anglers were required only to remove the tag from each fish caught in order to claim their money.

Because the fishermen were releasing their fish, they were permitted to catch as many as they could at this year’s tournament, rather than being restricted to a limit of five fish.

“People could catch more than five this year,” said John Jackson, who serves as president of the event. “They didn’t have to bring the fish back to get paid, just the tag.”

Despite — or perhaps because of — the COVID-19 pandemic, the number of fishermen participating in this year’s tournament was up substantially from what it was a year ago.

“It was very successful,” Mark Jackson, vice president of the event, said of this year’s two-day, Saturday and Sunday tournament that was held in optimal weather conditions. “I think that we had about 575 people fishing, which was up over 100 from last year. This year’s tournament was a very good tournament.”

John Jackson felt that the social effects of the pandemic may have prompted more interest in the event this year on the part of people who just wanted to get outside and fish.

“People came from all over the state,” John Jackson said. “We got a lot of entrants, and it could have been that people just wanted to get out of their houses after being cooped up. It was a nice weekend.”

Mark Jackson was quick to thank the sponsors and event volunteers for their help, as well as the landowners who graciously allow the tournament to be held on their property.

“We sincerely appreciate all the sponsors, volunteers and the landowners who make this event possible,” Mark Jackson said. “If we weren’t able to get sponsorship money for the fish for this event, nobody would come to fish.

“Some of the sponsors put up 1,000, 500, or 250 dollars for a single fish, while other sponsors put up 20 dollars apiece for 25 separate fish,” Mark Jackson added. “It all depended on what we need to get fishermen to come to this event.”

Mark Jackson pointed out that registration information and/or brochures for the 2021 Bald Eagle Creek Trout Tournament will be available at the Jaffa Shrine Outdoors Show next February, or at several sporting goods stores in the area next spring.

Further information about next year’s tournament can also be obtained on the website baldeaglecreektrouttournament.info as the 2021 event draws closer.