HOLLIDAYSBURG — The opening day of trout season is a rite of passage for spring each year across Pennsylvania.

Though the opening date has changed for some anglers in the Commonwealth because of the institution of the early opener for 18 eastern and southeastern counties, the first day of trout season is annually a much-celebrated and highly-anticipated event for which most people who fish generally mark their calendars.

It’s not the same for the first day of bass season, which this year came in on Saturday, June 13, on the state’s lakes and rivers.

Bass season annually arrives quietly, without much fanfare, but that doesn’t mean that people who fish don’t enjoy fishing for bass equally as much as they do fishing for trout.

In fact, people who enjoy the challenge of a fighting fish generally enjoy fishing for bass more than they do for trout.

“I fish for bass maybe two or three times a week,” said Carrie Young, 43, of Duncansville, who was interviewed by the Mirror recently while fishing for bass with her son, Lance, 15, at the lake at Canoe Creek State Park.

“I don’t fish for trout much,” Carrie Young added. “Honestly, the bass put up such a nice fight. They often tend to roll in the water when you’re trying to pull them in. But that’s just part of the game. It’s fun.”

Tim Teltow, 65, of Altoona, who fishes for a variety of gamefish including bass and trout, agreed that bass provide a formidable challenge.

“Bass really go,” Teltow said. “Muskie (muskellunge) will put up a good fight, and if you catch a pickerel, they’ll dance with you, too.

“I like fishing for bass and trout pretty much equally,” added Teltow, who was fishing for trout with Power Bait at the Canoe Creek State Park Lake. “Bass are harder to catch. You have to have what they want to eat, and what impresses them, in order to get them to strike your line.”

While natural bait like various types of worms comprise the standard fare for trout, bass anglers tend to use items like plastic worms and different types of lures.

At Canoe Creek Lake, Carrie Young caught and released a decent-sized largemouth bass using a plastic worm. After the official opening day, anglers are permitted to keep four bass measuring 15 inches or more per day on many area lakes, including the one at Canoe Creek State Park.

“We never keep them,” she said. “The best luck that I have with (lures for) bass is with plastic crayfish. Last year, I ended up catching the biggest bass that I’ve ever caught – a 5-pound fish – using a plastic crayfish for bait.”

Lance Young, who will be a sophomore at Hollidaysburg Area High School this fall, also likes using lures for bass.

“I’ll use a plastic worm,” Lance Young said. “Or I’ll throw out a top-water lure if it seems like (the bass) are going after bugs.”

Although he may keep an occasional trout for dinner, Teltow also generally releases the bass that he catches.

The biggest bass that he caught in his life was a six-pound largemouth out of the Saint Clair River in Michigan.

Teltow owns a canoe and uses it to get to the deep sections of a lake when he is fishing for bass. He said that he used to fish Glendale Lake at Prince Gallitzin State Park when he was going for bass, but he now goes to the lake at Canoe Creek State Park.

“I used to go to Glendale but I got tired of hauling my canoe back and forth,” Teltow said. “I have a place here (Canoe Creek State Park) where I can moor the canoe, and when I want to get out here and get my motor going, off I’ll go.”

For Carrie Young, fishing is a family affair. Carrie’s husband and Lance’s father, Shane Young, is also a regular part of the family’s fishing entourage, and fishing is something that they all can do together.

Along with that, fishing also provides Carrie with a couple of valuable emotional connections.

“As a mom, I like bringing (Lance) out to a place where we can actually put our cell phones down and talk to each other,” Carrie Young said. “When we’re out here, we’re not on our phones.

“I just started fishing in the last five years,” Carrie added. “My brother and I used to fish as kids, and he passed away eight years ago. So getting out and fishing helps me to feel connected to him.”

And fishing for bass, like fishing for trout, always provides one with the incomparable thrill of the catch.

“Once you hook into them, you’re hooked,” Carrie said.

Now that summer is upon us there is no time to waste. There are still many things about which to argue, turkey ...

Father’s Day is upon us. Most of us who embrace the outdoor sports as part of our lifestyle were introduced to ... 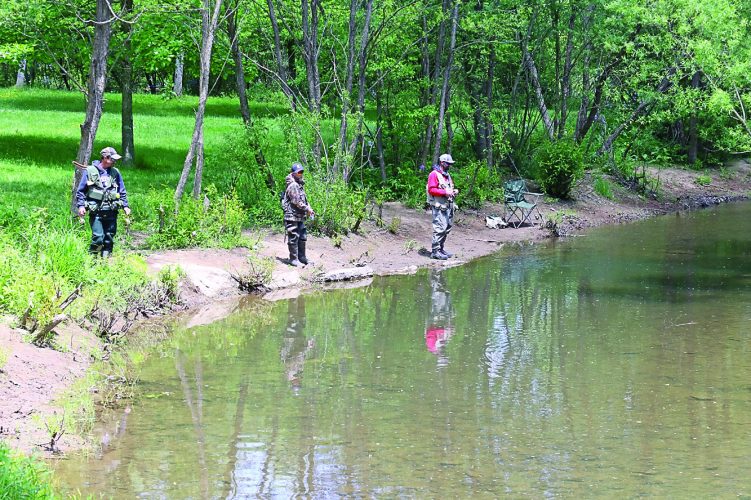