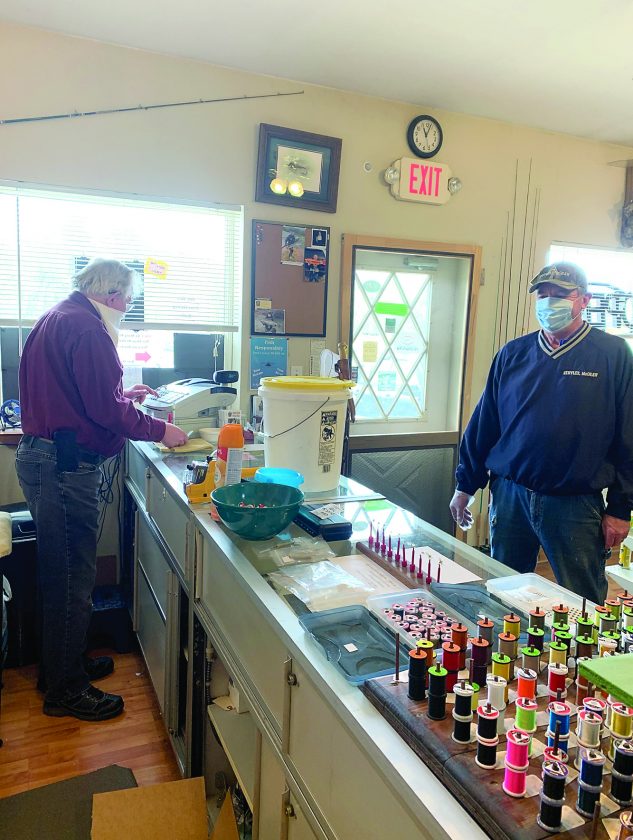 Since mid-March, the COVID-19 pandemic has shuttered businesses across the country.

A handful of others, however, are doing well.

Among them are some bait and tackle suppliers, at a time when trout fishing provides a physical and emotional outlet for people during this period of great social unrest.

The Aquatic Imitations bait and tackle shop, located two miles east of Hollidaysburg on 311 Route 22 in the Mielnik’s Shopping Village, has been rolling with the punches doled out by the pandemic and the social distancing restrictions that it has brought into play.

Creg Strock, 68, owner and proprietor of Aquatic Imitations, said that his business hasn’t been hurt by the pandemic since the trout season opened early and abruptly for the entire state on April 7.

“Actually, no,” Strock said when replying to the inquiry as to whether business at his store has been slower than usual this spring. “Business has been very good since the trout season opened. I think that there are a lot of people who are just trying to get out of the house for some fresh air and sunshine, so they go fishing.”

Aquatic Imitations, which opened for business in 2012, is open six days a week — except Wednesdays — from 8 a.m. to 6 p.m. each day. It offers a full line of bait and tackle stock to suit the needs of novice and experienced fishermen alike.

There are also a large variety of fly-tying materials available for fishermen who tie their own flies, Strock pointed out.

Among them is Paul Conner, 62, of Hollidaysburg, who has been a regular customer at Aquatic Imitations since the shop opened.

“Honestly and truthfully, he is one of the friendliest people around,” Conner said of Strock. “I’m a fly fisherman who buys my (fly-) tying stuff there, and he goes out of his way to take care of his customers. You’re not going to find somebody who cares more about his customers than he does.”

Butter worms, a very popular type of trout bait, are currently unavailable due to the pandemic, Strock said.

“That’s probably one of the best trout baits there are,” Strock said. “Normally, I have those. But because they come from Brazil, they can’t be imported here this year because of the pandemic.”

Wax worms are another big seller. Strock usually gets a delivery of wax worms each Thursday from a bait supplier in Harrisburg, and they always sell very quickly.

“I got 5,000 (on a recent) Thursday and they were sold out by the following Monday morning,” Strock said.

Strock said that his store is large enough that customers are able to adhere to the government’s requested minimum of six feet of social distancing between each individual.

He allows no more than five customers in the store at any one time, and, also adhering to state governor Tom Wolf’s mandate, Strock wears a mask and gloves to work each day and requires that each customer visiting the store wear a mask or other covering over their nose and mouth.

Fishing licenses aren’t available for sale at Aquatic Imitations, but almost everything else — including new rods and reels, and fishing line — is.

Strock said that his customers have been very cooperative.

“Everybody has been very good about this,” Strock said. “They’re working with us through this. They want to go fishing, so they’re more than willing to abide by the guidelines.”

And Strock, in turn, plans to try his best to reward the cooperation of his customers.

“We appreciate all our customers working with us through this time, and we will do everything we can to make their next trip as enjoyable as possible,” Strock said.

Notable: Aquatic Imitations is a fishing bait and tackle shop that has been in business in 2012, and offers various types of live bait, as well as hellgrammites and leeches during the summer months. Rods, reels and line are also sold, as is a wide variety of fly-tying materials for fishermen who tie their own flies.

Hours of operation: Shop is open six days each week, every day except for Wednesday, from 8 a.m. to 6 p.m.