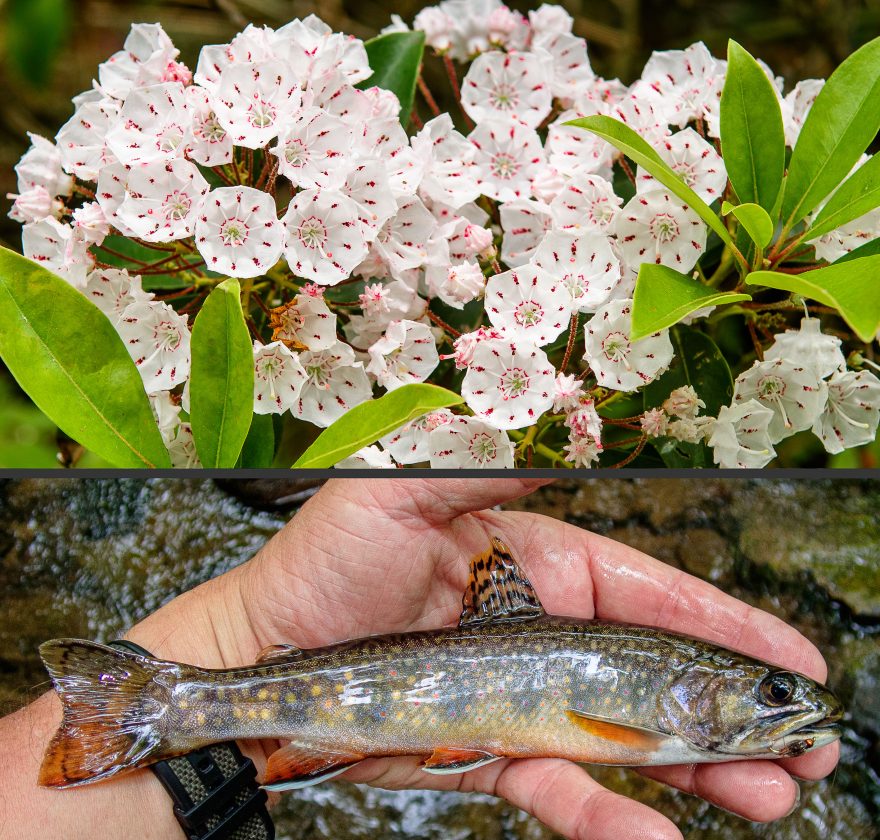 As I rounded a turn on the narrow backroad, I was delighted to see the steep hillside on the right was awash in the white and pink blossoms of mountain laurel.

Part of my mission that day was to photograph some fresh mountain laurel, so finding this particular stand of our state flower in full bloom confirmed my timing was right. I’ve always been pleased with the choice of mountain laurel as one of Pennsylvania’s symbols, having been so designated on May 5, 1933. This hardy, evergreen shrub grows in the mountainous forests throughout the Appalachian Mountains from Maine to Florida and in many of the rugged and beautiful ridges of Pennsylvania.

In late spring, mountain laurel produces large clusters of pinwheel-shaped white flowers with delicate pink or red marking on the petals. In areas where there are dense concentrations of the plants, the prolific blooms create breathtaking waves of white in contrast to the deep greenery of the surrounding springtime forest. Despite the beauty it displays for a few weeks each season, mountain laurel is actually poisonous to horses, cattle and humans, although no part of it really appears appealing as an item of food.

With that generous photo opportunity before me, I assembled my camera gear and tripod and set about capturing the natural beauty of the laurel blooms. I found a couple of bushes side by side that had pleasing arrays of flowers, allowing me to shoot many wonderful closeups. As I moved about the laurel thicket, I also was able to observe some wonderful examples of another Pennsylvania symbol, the eastern hemlock.

Designated as our state tree June 23, 1931, the eastern hemlock is another fitting icon of wild Pennsylvania. The oldest recorded specimen of an eastern hemlock was found near Tionesta and was estimated to be around 554 years old.

Most hemlocks will reach heights of about 30 feet, with a few growing as high as 50 feet. One exceptional tree in Cook Forest State Park, however, has been accurately measured at 144 feet. Like mountain laurel, the primary range of the eastern hemlock is also Appalachian region. Sadly, our state tree is threatened by a tiny insect known as the hemlock wooly adelgid. This sap-sucking bug was accidently introduced from East Asia into the United States in 1924 and found its way into the hemlock range in the 1960s. Many stands of hemlock trees throughout Pennsylvania are now infected with this tree-killing pest.

Pondering the plight of our hemlocks also recalled the current woes for two other state symbols, ruffed grouse and white-tailed deer, which I have often seen and hunted in this location. The ruffed grouse was designated as Pennsylvania’s state bird on June 22, 1931. Grouse populations in most of the state have suffered steep declines over the past several years.

Recent research has indicated these losses could be caused in part by West Nile virus, a disease commonly transmitted by mosquitoes. Those of us who cherish this great gamebird certainly hope something can be done soon to restore it.

The future of our white-tailed deer is much more ominous. The white-tailed deer was designated as our state animal on October 2, 1959, and our deer herd has brought much enjoyment to generations of hunters and nature lovers. Chronic wasting disease (CWD) was first discovered in wild deer in Pennsylvania in 2012. Since then, this insidious and always-fatal disease continues to spread, and infection rates grow higher everywhere it has occurred. Currently,

My mood brightened, however, as I listened to the happy sound of a running stream not far from my parking spot. I was ready for the second part of my mission that day, an encounter and a photo op with one more Pennsylvania symbol, a wild brook trout. Designated as our state fish on May 9, 1970, brook trout are the only species of trout native to Pennsylvania. The popular and ubiquitous rainbow trout was introduced from the Pacific coast, while the wily brown trout was imported here from Europe and the British Isles. Brook trout require clean, cold water and are now found mostly in small headwater streams in the mountains (just like mountain laurel and hemlock trees). The Pennsylvania Fish and Boat Commission does stock some brook trout, but those fish are flabby, colorless versions of their wild cousins, which are as beautiful as any fish that swims in freshwater.

After exchanging my heavy DSLR camera and tripod for a pocket camera and a fly rod, I headed to the stream. I caught a nice brookie at the second spot I tried. I had forgot to bring a landing net, which is a huge help when trying to take pictures of live fish by yourself.

And that fish flipped back into the water and escaped as I attempted to pose it beside my rod on some wet moss. A second, smaller fish did a similar escape act. A short time later, I hooked the best brook trout of the day. This time, I pulled my camera from my pocket and turned it on.

Then I scooped up the 10-inch trout in my left hand, and it obliged me by holding still just long enough for me to click off a couple of shots (notice the bead-head nymph still in the corner of the fish’s jaw in the photo). After taking a final second to admire its orange fins edged in black and white and the lovely red spots with the pale blue halos, I unhooked and released it.

Enjoying a break from winter

Few things are as satisfying as enjoying a welcome break from winter in the form of an unseasonably pleasant day. ...

The Associated Press GOLDEN POND, Ky. — Like a slow-motion, underwater cattle drive, wildlife officials in a ...

The Associated Press NEW ORLEANS — A lawsuit seeking to return federal protection to the real bears that ...