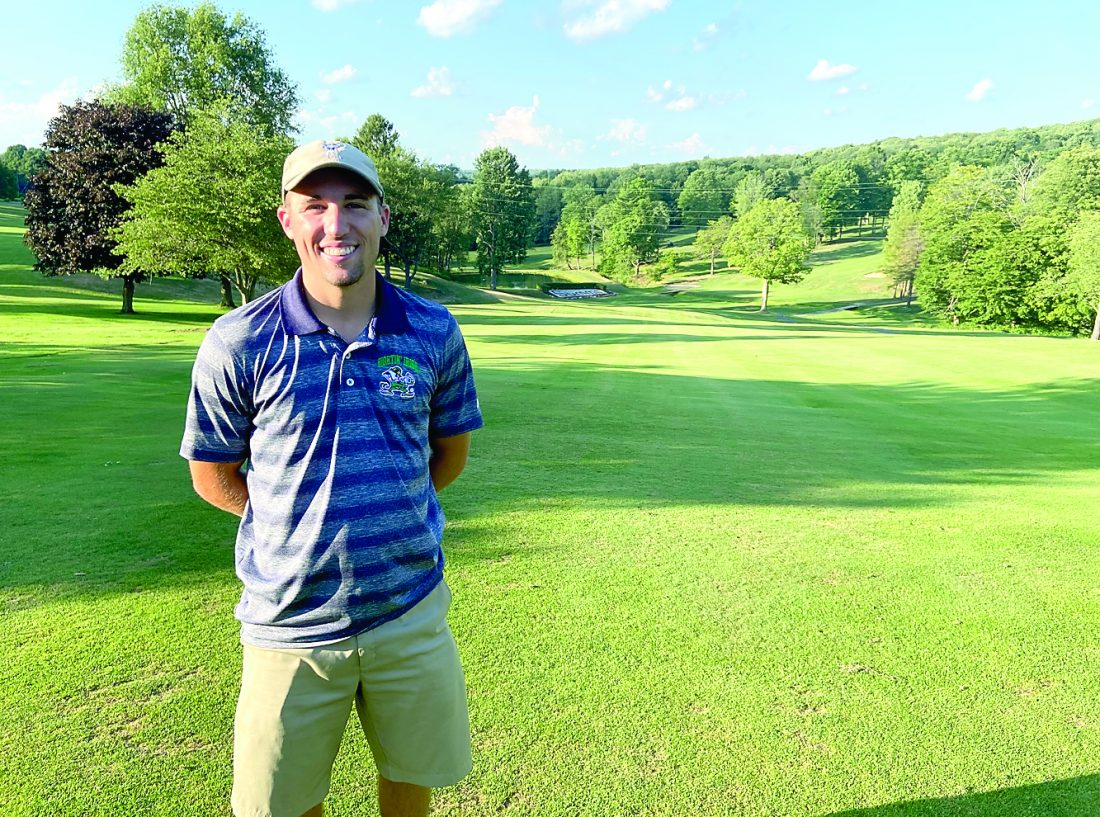 Courtesy photo Once a member of the Mount Aloysius golf team, Dylan Link is now the head coach.

CRESSON — Ebensburg’s Dylan Link is quite familiar with the golf course at Cresson’s Summit Country Club.

He’s worked there the past several summers and is also competing in this weekend’s 27th annual Invitational tournament, with partner Willie McMahon.

However, Link’s biggest responsibility at the course in recent years has been coaching young students as they compete on the Mount Aloysius golf team.

“I was fortunate to have the opportunity to become the Mounties golf coach in the spring of 2016,” Link said. “Since that time, I’ve really enjoyed working with the team and doing whatever it takes to make each player a better golfer, better student and better person.”

Link was an outstanding student-athlete at Mount Aloysius College. Originally recruited as a baseball player, Link eventually focused exclusively on golf, becoming a three-time AMCC All-Conference Selection during his playing career before graduating in 2015.

He was introduced to the game of golf at an early age by his father and grandfather who brought him along while playing Immergrun or Ebensburg Country Club.

Despite that early exposure, Link eventually focused on baseball and basketball as he advanced through Bishop Carroll High School. It wasn’t until his senior year that Link’s sporting focus turned to golf.

Link’s growing passion for the game led to his successful run as a standout golfer for Mount Aloysius. While there, he also excelled in the classroom, graduating from the Cresson-area school with a degree in history/political science in 2015.

Shortly after that, Link earned his teaching certificate in secondary education and joined the staff of Penn Cambria High School as a seventh grade teacher.

Meanwhile, in the spring of 2016, Mount Aloysius was looking for a new head golf coach. It was an opportunity too good for Link to pass up.

“We’re really fortunate to have a young man like Dylan lead our golf program,” current Mount Aloysius athletic director Kevin Kime said. “Dylan has a great knowledge of the game, but more importantly he has the type of character we’re looking for to lead our program.”

As a brand new coach, fresh to the college scene, Link realized he needed to get up to speed quickly on NCAA compliance rules.

“I had a lot of learning to do early on,” he said. “Our women’s head volleyball coach, Brianna Black, was particularly helpful. I’m sure she got tired of my many questions, but I can’t thank her enough for the help she provided.”

Now in his fifth year as the Mounties’ head golf coach, Link has set a tone for the golf program that focuses his players toward a few key aspects — including short game practice, physical training and mental toughness.

With uncertainty still surrounding the upcoming season due to the coronavirus pandemic, the Mount’s golf program still has plans to compete this fall.

Their returning squad will be led by last year’s standout golfer, Aloysius Lee, a native of Malaysia. Newcomers to the team will include a trio of local freshman — Penn Cambria’s Tanner Fogel, Central Cambria’s Brian Walwro and Northern Cambria’s Derek Stafford.

“As a Division III program, we don’t offer sports scholarships, so we look to attract student-athletes in other ways,” Kime said. “Mount Aloysius offers a great education with a great overall experience, and Dylan does a terrific job not only leading our golf team but also in representing our school in the best way possible.”