SFU new AD must deal with ppd. of fall sports at school 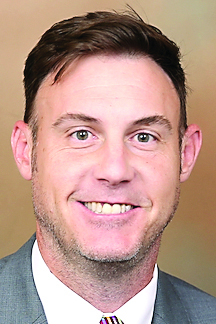 LORETTO — James Downer is taking over a good new job at perhaps the worst possible time in college sports history, but he can rest assured that Saint Francis University remains as committed as ever to its athletic department amid the coronavirus pandemic.

“I feel like if we can get through this, the rest of the job should come fairly easily after that,” Downer, the new athletic director at SFU, said during his introductory news conference Wednesday afternoon.

Downer started his new job last week and has been getting up to speed on all aspects of the Red Flash athletic department. He has the added challenge of trying to navigate during most uncertain times.

“We all want to play sports, there’s no doubt about that,” Downer said.

Saint Francis, however, will not be playing sports any time soon.

Late Wednesday night, the Northeast Conference announced that it is postponing all fall sports, including football.

“Today’s announcement from the Northeast Conference that the competition of fall sports will be postponed is extremely disappointing for the student-athletes, coaches and staff who have been eagerly preparing for the onset of their championship seasons,” Downer said in a university statement.

“As a former student-athlete, I absolutely understand and share the desire of the Red Flash family to return to competition. However, this decision was made with the health and safety of our student-athletes, coaches, staff and fans being at the forefront and we fully support that decision.”

Saint Francis has upgraded its football program in recent years so that it now can compete against FBS teams, which can bring in a lot of money for the athletic department. The Red Flash were scheduled to play at Buffalo on Sept. 12, in a game likely to be worth at least a couple of hundred thousand dollars, but that opportunity now has been postponed by the NEC decision.

Earlier Wednesday, Downer said his immediate objective is to try and provide “a sense of normalcy with our student-athlete population.”

“There’s a lot of frustration, confusion, probably even some anger at times,” Downer said. “We want them to feel comfortable.”

Downer felt comfortable from the moment he set foot on SFU’s mountaintop campus.

“I sensed that I was destined to call Saint Francis home,” he told the assembled crowd of guests and coaches, as his wife, two sons, father and in-laws sat in the front row.

He also told the crowd his goal is to help SFU become the preeminent power in the Northeast Conference. He called his new job “by far my greatest athletic challenge” and also said it is “an opportunity of a lifetime.”

“James really came across very strong in terms of the Franciscan mission of the institution,” Van Tassell said. “I could tell that he is a man of faith, he is a man who has good morals and values and a man who’s going to lead by example.

“When you look at his resume, he has a well-rounded array of experience.”

Saint Francis offers 23 sports programs, a huge number for one of the smallest Division I schools in the nation. While the number is less than Penn State offers (31), it’s more than Wisconsin (22).

Also by comparison, Stanford now offers 25 sports after recently announcing it will be forced to cut 11 programs because of financial concerns brought on by the pandemic.

Van Tassell said he’s “very confident” that Saint Francis won’t have to cut any of its sports programs.

Saint Francis has to be committed because of its unique academic structure. As Van Tassell said, the school relies heavily on athletics to drive the enrollment of the school, so much so that if SFU dropped any sports, it likely would cost the school money because it would mean fewer spots for students.

“Simply put, sports is fun,” Van Tassell said, “so we want to make sure that the athletics department has the resources it needs to attract good student-athletes who are also good students academically.”

Those words are wonderful to hear for a new athletic director.

“That’s a key reason why I’m standing with you here today,” Downer said. “If I felt like I didn’t have that support and commitment to keeping the entire athletic profile, that would be a question for me if this was an institution that I’d really want to be a part of.

“I learned that early on from Fr. Malachi and Dr. (Frank) Montecalvo that they’re committed.”

Downer comes to Saint Francis from Eastern Kentucky, where he was a senior athletic administrator. He began his administrative career at Central Oklahoma and also worked at Nicholls State and Presbyterian College, all small programs where he was able to gain a lot of experience. He considers his strengths to be versatility and visibility.

“I kind of fashion myself as a Swiss Army Knife. I can do just a little bit of everything.”