BG grad works to get on field at WVU 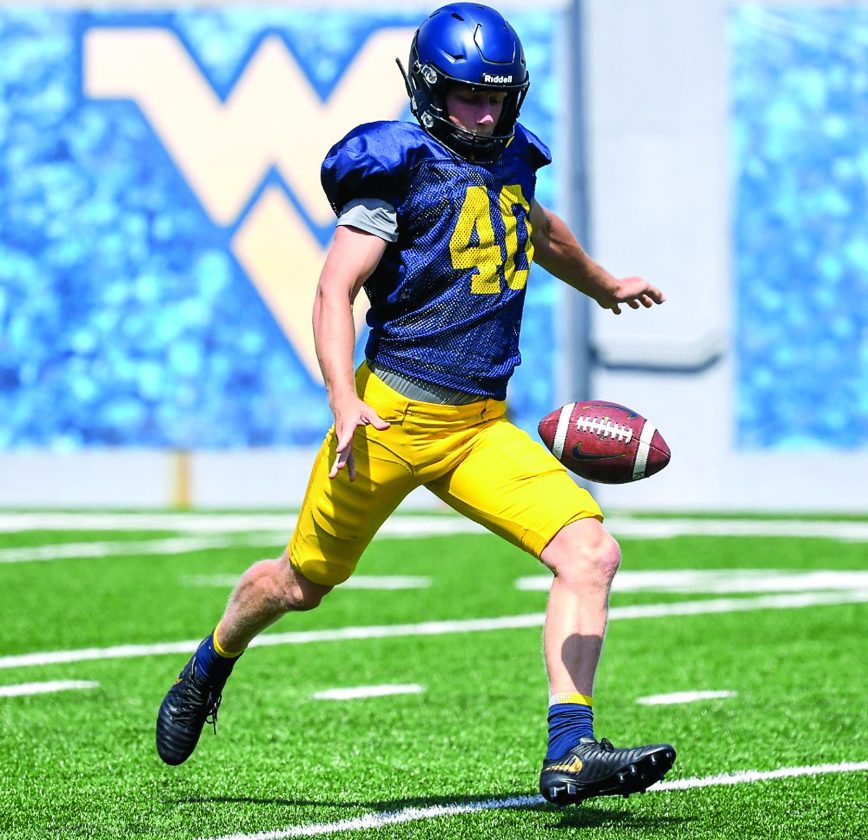 Courtesy photo Kolton McGhee is listed as both a punter and kicker for West Virginia this fall.

When Kolton McGhee was kicking and punting at Bishop Guilfoyle Catholic, there wasn’t anyone pushing for his job.

It was obvious he was the best kicker, not just on the team, but one of the best at his level in the country.

Mountaineers head coach Neal Brown brought in punter/kicker Tyler Sumpter, a graduate transfer from Troy who played under Brown before he came to WVU, at the end of May.

“It’s always a competition when you get to this level,” McGhee said. “They are always bringing in guys from around the country. I’m competing against him for the punting job.”

Sumpter was one of the better kickers in the Sun Belt Conference and has a 42.2-yard average on punts for his college career.

McGhee isn’t shying away from the competition.

“I want to see the field this year,” McGhee said. “I want to get that starting position and to just help the team out as much as I can.”

The West Virginia coaching staff still has high hopes for McGhee and think he benefited from his redshirt year last season.

“Kolton has shown very solid improvement going into his second season,” West Virginia special teams coordinator/inside linebackers coach Jeff Koontz said. “He was able to learn and grow last season, and you can tell he’s even more motivated heading into this fall.”

McGhee is still listed as both a punter and kicker on the roster, but his focus has shifted to punter due to West Virginia’s need at the position.

Josh Growden averaged 42.1 yards per punt as a redshirt senior for WVU last season. The Mountaineers have two kickers returning in senior Evan Staley, who made 11-of-17 field goals last year and sophomore Casey Legg, who went 2-for-4 on long-range attempts.

“There’s so much more to special teams than you can ever imagine,” McGhee said. “There are so many different schemes, and it’s more than anyone thinks. It’s way more than in high school. Special teams are one of the most important things about football in college, because it can change games.”

“He’s a guy who wants to be coached in all aspects of our program,” Koontz said. “And he will compete for the punting role through camp.”

McGhee said it has been good to be reunited with his teammates in Morgantown.

“I was home back in Altoona for a lot of quarantine,” McGhee said. “We got back down here in mid-June and started workouts again. We have been conditioning, weight lifting and getting ready for the season. It was tough at the beginning being away from teammates and coaches, but it was a good time to work on mechanics and practice my punting.”

Despite not playing as a true freshman, McGhee said the experience is something he’ll never forget.

“It was everything I expected and more,” McGhee said. “I love it down there, and the coaching staff was great. They are players’ coaches, and they really care about us. It’s a different world when you’re playing for a Division I program that gets to travel all over the country and play on television. It was a great year.”

He’s also confident the 2020 season will be played despite concerns over the COVID-19 pandemic.