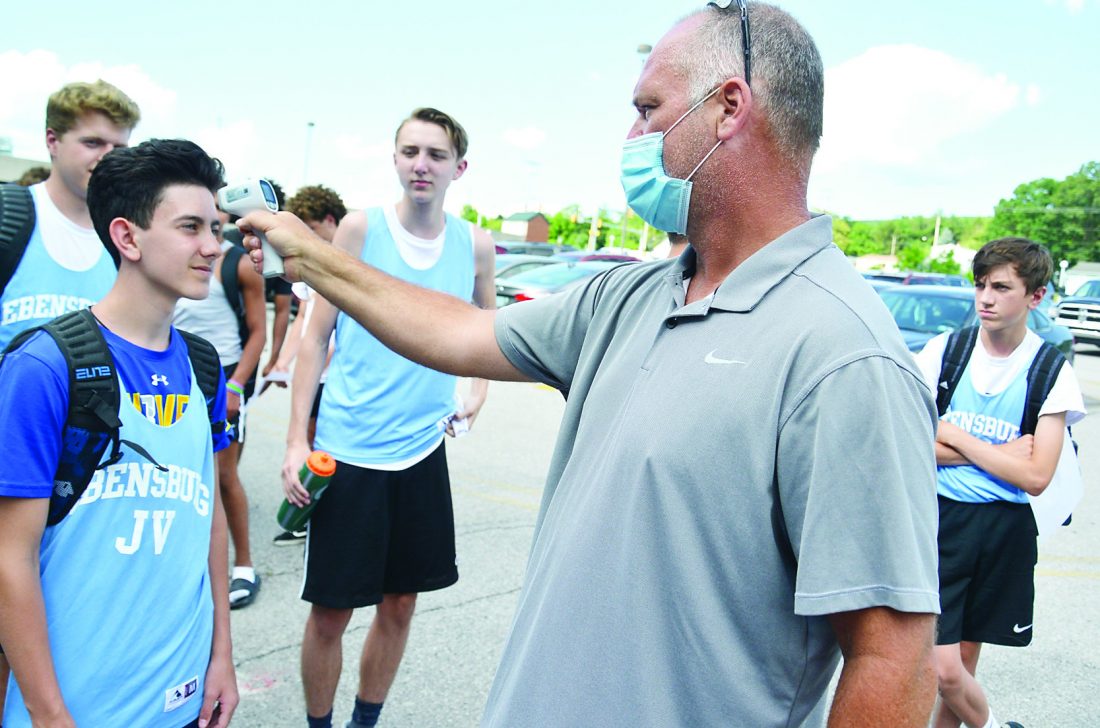 The Central Blair Recreation Commission Lakemont Park basketball league resumed Monday after a week off following a positive COVID-19 test of a player at the end of the league’s first week.

“We had one of our players, who was not from around here, test positive,” CBRC Lakemont Park League Director Skip Dry said. “We shut down for a week and sanitized everything. We came up with a process where we have people up top doing a temperature check. They have you sign a waiver, ask you a couple questions and you come and play basketball. We’re trying to be as safe as we can. We want everyone to be safe, but we want to play basketball too.”

Players, referees and coaches lined up in front of Galactic Ice to have their temperature taken and turn in waiver forms before being stamped to be allowed to enter the park.

“It’s been great,” said Tom Palfey, who was taking temperatures and helping check people in. “It’s been a little hectic here the first night with a big crowd, especially the first game with everyone filling out their forms. But everyone is OK going through it, and it’s great that they are out there playing.”

One team not playing Monday was Johnstown’s high school team. The squad was originally scheduled to have two games this week, but the school district announced one of its players tested positive last week.

“We learned on Wednesday evening, June 24, 2020 that a member of our boys basketball team, although asymptomatic, tested positive for COVID-19,” Johnstown superintendent Amy Arcurio wrote in a statement released on Twitter. “The Health & Safety Resocialization Plan that the school district put into into place June, 18 2020 proved to be a valuable tool in mitigating the spread of the virus to others.”

Dry said the league was working with Johnstown to reschedule its games.

“They notified us that they wouldn’t be coming over for two weeks,” Dry said. “We honored that. We’re going to look at the schedule and see what we can do. We don’t want to take games away from anybody. The teams that didn’t play last week that were scheduled will make those games up at the end of the season.”

Among the early games Monday was a contest between the Altoona and Hollidaysburg high school teams.

“Just getting out and playing after three months of doing nothing and losing spring gym and some of the tournaments we were going to play in, I told these guys to get out here and have some nice evenings and get back into shape,” Altoona boys basketball coach Jarrod Klausman said. “First and foremost, this is about keeping the kids safe, and if we can continue to play basketball too, it’s the best of both worlds.”

Across town, another basketball league began with its first games.

The Building II Athletic Club started its high school girls league Monday, with the boys league slated to start July 9. Other indoor leagues, such as the Blair County Regional YMCA girls league, have been canceled for the year.

“I think a lot of teams are going to be really happy to play,” Building II League Director Mark Bennett said. “The girls teams, especially, because this is all they have.”

Altoona’s boys team in playing in both the Lakemont and Building II leagues.

“Playing three games a night as opposed to four (at Building II) is one thing, and everyone is doing what they can,” Klausman said. “They are spreading the games further apart, taking the proper safety measures and trying to get out and play some basketball and have some fun.”

Building II posted a notice on its entrances that the league is taking necessary precautions as set by the PIAA and CDC and that social distancing and the use of masks were strongly recommended by the Pennsylvania Department of Health.

“We’re doing extra cleaning in between games,” Bennett said. “Everyone is going out an exit door and coming in a different door. There’s an hour and 15 minutes between each game.”

The first game between Penn Cambria and Williamsburg ended 30 minutes before the next game between Bellwood-Antis and Bishop Guilfoyle Catholic, allowing plenty of time for parents and players to exit through one door before players and parents for the second game came through another.

One of those players waiting to go in was BG rising junior Leah Homan. The Lady Marauders’ season was one of six in the Mirror’s coverage area cut short in the PIAA quarterfinals last year due to the COVID-19 pandemic.

“When I found out they were having the Building II League, I was thrilled,” Homan said. “Losing the chance to go to the state championship took some time to get over, but having something else to get into and get that rhythm back is a blessing.”

Tom Fox’s Ultimate Bigman Post Player Camp will take place at Building II next week from July 6-9. The girls camp will be from 9 a.m. until noon each day while the boys will be held from 1 p.m. until 4 p.m.

This is the 18th year the camp will be held and is open to players in seventh grade through 12th grade. The camp is run by Fox, a two-year starter at Saint Francis, who started the camp in 2003 and by former Penn Cambria girls coach Rodger Fair, who has been a coach for the past 30 years.