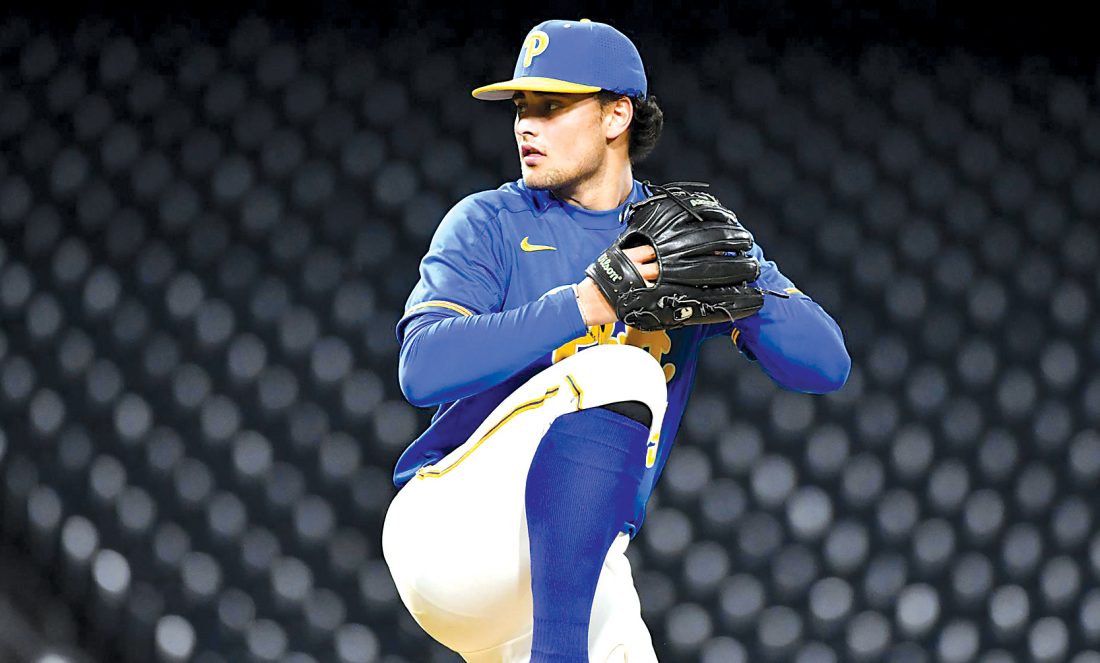 Courtesy photo Penn Cambria graduate Mason Ronan was beginning his second season as a pitcher at Pitt when the 2020 season was canceled.

The NCAA canceled all 2020 Division I spring sports on Thursday, March 12.

That decision changed the lives of thousands of athletes across the country, including many area baseball players at the top collegiate level.

Some players were just getting their feet wet, like Bishop Carroll Catholic High School graduate Carson Ertter, who had just two at bats with Penn State before the coronavirus pandemic wiped out his freshman year.

Others, like Bishop Guilfoyle graduate Will Lozinak were trying to build off breakout seasons. Lozniak had a 16-to-2 strikeout-to-walk ratio when his season was halted at Morehead State after going 8-1 on the mound as a sophomore.

The Mirror caught up with a few of the other Division I baseball players to get their reactions to the game they played since they could swing a bat or throw a ball suddenly being stopped.

Pitt sophomore Mason Ronan, a Penn Cambria graduate, had just finished up a series against Miami and was averaging nearly two strikeouts per inning pitched through seven innings over four appearances in 2020.

He knew the situation with the coronavirus had been escalating, but reality hit when the Panthers got to the airport.

“We were sitting in the Tampa airport and seeing things all over Twitter,” Ronan said. “There was a lot of uncertainty. We saw they canceled March Madness, and we all wondered how it would affect us. We said, ‘if March Madness and the NBA are canceled, we’re done. There’s no way we can play if March Madness is canceled.'”

Still, no official decision was made until later in the week.

“We end up practicing, and Coach (Mike) Bell told us we needed to be ready to play and things were still on,” Ronan said. “We were still preparing for Virginia to come up and play. Coach told us Virginia was on a bus to come play us, and we shouldn’t think we wouldn’t play. Then, literally 45 minutes into practice, he calls us in and told us it was over. It was just like that. So abrupt. I can’t even describe the reactions and the mood for the team after that. (Senior) David Yanni, our shortstop, I looked at him and he was shaken to the bone and my heart felt so bad for him.”

In the weeks following the cancelation, the NCAA decided to give all spring sports athletes another year of eligibility, so players like Yanni could return if they wished.

That didn’t help players like Juniata Valley graduate Bryce Hensor, who played in just nine games at Morehead State in 2019 after suffering a serious wrist injury.

“Coming back from the injury, I thought we’d turn the corner as a team. For me, personally, this was going to be my year,” Hensor said. “Right when things ended, I felt like I was really starting to click on all cylinders. It was tough to handle, because it turned from a year being out to almost two years being out. It’s a tough pill to swallow, because you feel like right when you were getting up, you just got pushed right back down.”

“We haven’t had this much down time since sixth grade,” Hensor said. “You almost feel like you’re unemployed a little bit. You go from your days being filled up by baseball from the second you wake up until the day you come home. Then, one day you wake up, and you have nothing to do.”

Hensor said losing this season to a virus was much tougher than getting injured.

“When I got hurt, I was OK with it, because it was me doing something that ended my season,” Hensor said. “With this, no one did anything wrong. For it all to come to an end leaves a sour taste in your mouth and gives you an appreciation for how lucky we are to get to play.”

But for one area player, the shutdown may have come at the best possible time.

Huntingdon graduate Nick Holesa suffered an elbow injury and a torn ACL last summer sliding into second base but was set to be cleared by March 2. Two weeks before he was cleared to play, the Virginia Tech sophomore suffered a torn labrum in his hip, ending his season.

He had his surgery the day the NCAA canceled his season.

“Either way, I wasn’t going to be able to play this year,” Holesa said. “So, it was nice to not have to use a redshirt.”

Holesa’s heart went out to his teammates when he joined them for a meeting just after his surgery.

“In our conference room the next day, it was really emotional,” Holesa said. “I don’t think there was a dry face in the crowd. All the coaches were crying, the players were crying. It was emotional, because our team got so close this year. It all stopped all of a sudden.”

Holesa was coming off a freshman season in which he played 32 games and started 19 times at first base. He hit .224 but ended the year on a six-game hitting streak that included two game-winning RBIs and scoring a game-winning run.

“I learned more in one year playing my freshman season than I have my entire life,” Holesa said. “It was very eye-opening for my baseball career, even though I have been playing since I was 4. It was a struggle in the fall and early spring getting used to ACC pitching. But I worked on my swing and started to do better and ended the year excited for the next one. Now, that’s on hold.”

Though the pandemic happened at perhaps the best time for Holesa, it ended the baseball career of Altoona graduate Zach Helsel, who was rehabbing from a 2019 UCL injury at the University of Central Florida.

“I went into shock,” Helsel said. “Who can cancel a college baseball season? I couldn’t even believe it was real, and by the time I realized it was happening, I had already made peace that we weren’t going to play. It gave me more time to rehab my arm and work on myself.”

For Helsel, who recently turned 24, the time has been an eye-opener.

“I just took a job (as a chief technology officer for a software company),” Helsel said. “I figured at my age, I wanted to get a job. I didn’t care how much eligibility I had left, I needed to start my life. I would have to go to grad school, and that’s a lot of money even with some of a scholarship.”