Leaving her mark: B-A benefits from Schmidt’s arrival from Florida 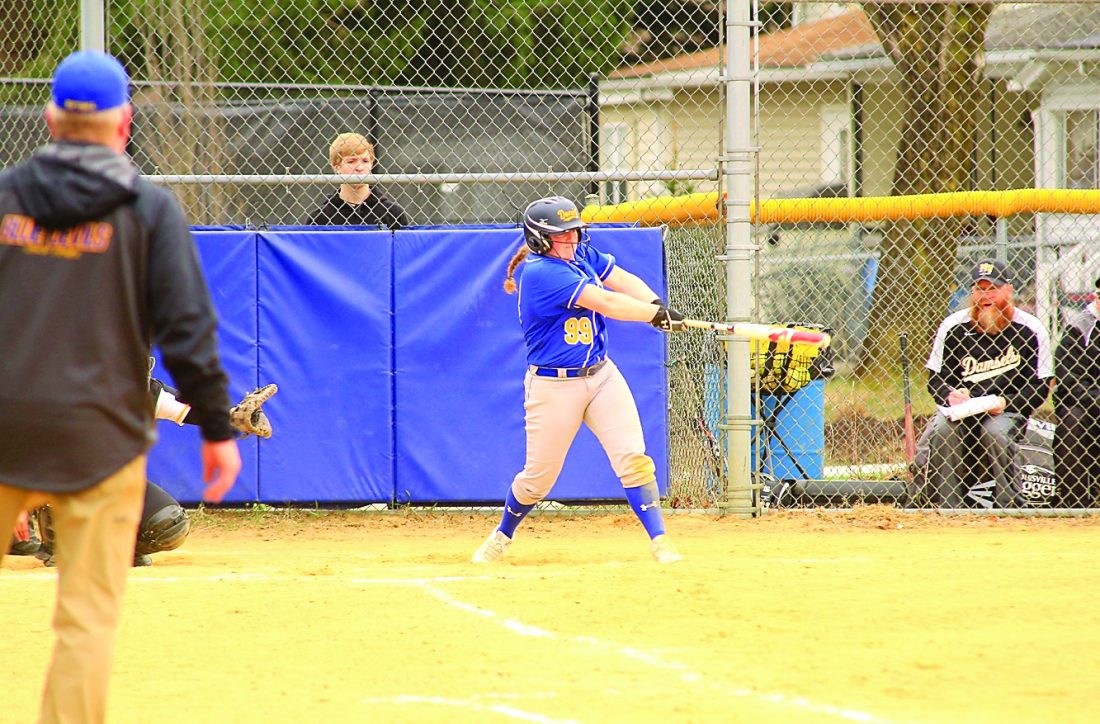 When Haley Schmidt moved to Bellwood from Florida as a high school freshman in the fall of 2016 and decided to join the Lady Blue Devils’ softball team the following spring, she was an unknown commodity.

Now in her senior year at Bellwood and set to graduate high school later this spring, Schmidt became the catalyst of the Lady Devils’ softball program as both a pitcher and a hitter.

Her senior softball season was canceled because of the COVID-19 pandemic, but Schmidt put up impressive numbers both on the mound and at the plate for Bellwood in her three seasons with the program.

Particularly last year as a junior, when she led Bellwood into the District 6 Class 2A playoffs by carding a .410 batting average with 27 hits, including 10 doubles, and six home runs, while also logging eight pitching victories and striking out 86 batters in 94 innings pitched.

For her three-year career, the versatile Schmidt — who has played every position on the field except for catcher as a varsity player — compiled a .401 batting average with 78 hits, including 23 doubles and 10 home runs. On the mound, she struck out a total of 219 batters.

“She’s extremely athletic,” Payne said. “We relied on Haley a lot over the last three years. Other girls have come along, too, and have grown and done well, but Haley was a real centerpiece of what we were trying to do as a team.”

All of which made the loss of her senior softball season that much more disappointing for Schmidt.

“It was very disappointing to lose my senior year and not to be able to finish out strong, and have the year that we all thought that we were going to have,” said Schmidt, who pitches and bats right-handed. “It was looking like it was going to be a good year for us.”

Schmidt had enjoyed a banner junior season, with the promise of even better things for her and her team in 2020.

“She just epitomized what we wanted for our program,” Payne said. “It was tough for her to lose this year, and it was tough not to spend this spring coaching her. As a pitcher, her change-up had become really deceptive, and she could mix a batter up so bad with that. Last year, she really came on strong down the stretch, and this season, we would have had her and two other good pitchers ready to go for us.

“Her hitting was amazing last year,” Payne said of Schmidt, who has batted out of the leadoff spot in the order for Bellwood. “She hit six home runs last year, and she batted first in our lineup, so we could get her more at-bats. She was the girl that we relied on in that top spot.”

Schmidt said that practice and repetition helped her to refine her skills.

“I do think that I’ve made improvement every year,” said Schmidt, who, at the suggestion of her coach, altered her pitching wind-up and worked on a more concise delivery in her freshman year, while adding the change-up and curve ball to go along with her fast ball. “I just think (the improvement was due to) the repetitions in practice, never giving up, just going as hard as I could in every practice and great coaching.”

Payne said that Schmidt was an inspiration and role model for her teammates.

“She led by example,” Payne said. “She was at every preseason drill — she never missed. She just showed up every day, and she worked very hard. She gave us everything that we could ask for, and more.”

An outstanding student, Schmidt plans on attending college — in all probability, Slippery Rock University, she said — and majoring in a medical field of study there. She also plans to try out for the softball team in college.

Moving to Pennsylvania from West Palm Beach, Fla., as a ninth-grader was an adjustment for Schmidt, but she said that joining the softball team helped her to acclimate to her new surroundings at Bellwood-Antis.

“It was a very big adjustment, but I’d say that playing softball, and meeting and making new friends on the team here, helped me the most,” Schmidt said. “It’s been a great experience the last four years.”

For her teammates and coaches as well.

“She’s just a saint of a kid,” Payne said. “She’d just make your day better by being at practice. I can’t find a chink in her armor. I think that she’s an amazing person, and anything good that comes her way is well-deserved and earned.”