Cal U notices hard work turned in by Hall 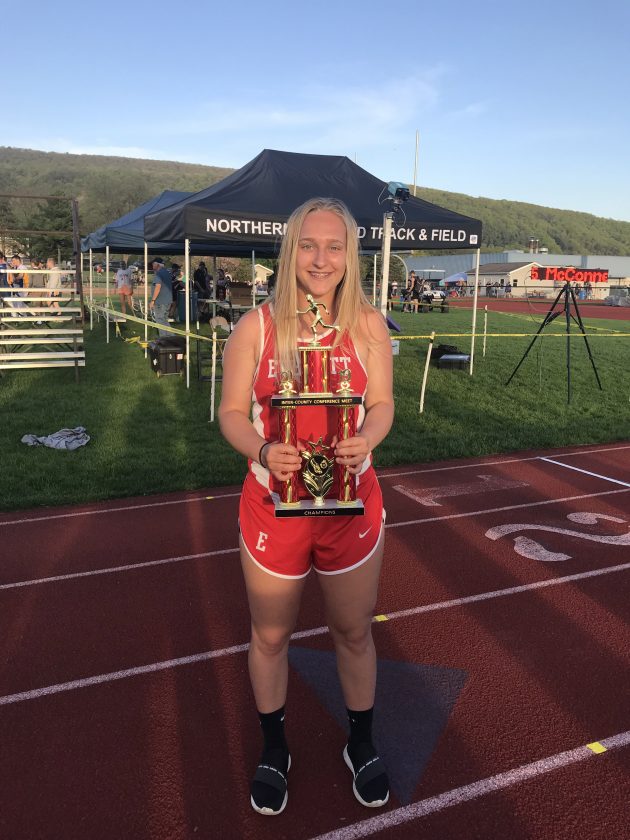 Courtesy photo Aubrey Hall was a standout for Everett in all three throwing events.

Everett Area High School senior track and field thrower Aubrey Hall had literally adopted a new spin on things entering her final varsity season this spring, and she felt confident that it would pay huge dividends.

Hall, who would have been a four-year letterwinner for Everett in the discus, javelin and shot put had the COVID-19 pandemic not forced the cancellation of all PIAA spring sports athletic events this season, was a District 5 meet runner-up in the discus as a junior last year with a throw of 86 feet, 2 inches.

After perfecting a full 360-degree spinning motion with her discus throw in early March, Hall felt that vast improvement was in the cards for her in the event this spring.

But then the pandemic struck.

“I started spinning this year, and my distances in the discus got really good,” Hall said. “Last year when I threw, I was only power-throwing. But this year I started throwing the discus in a complete 360-degree spin. It’s a full motion that gives you more momentum.

“I had added a lot of distance in practices, and I knew that my discus throw was a lot better,” Hall added. “I was hoping to win a district title, and make it to states this year.”

Bill Imler, who has been Hall’s throwing coach at Everett since her junior high school days, also thought that big things were in store for Hall had this year’s track season unfolded as planned.

“She’s been fantastic in all three throws, and it’s really unfortunate that things turned out the way they did this year, because in the couple weeks of practice that we had, her discus was really good, and I think that she could have made some noise in that event this year, especially in the District 5 meet,” Imler said.

Both Imler and Sue Conner, the head coach of the Everett track program, said that Hall combines raw talent with a very strong work ethic.

“She’s a strong girl, she has good throwing form,” Conner said. “Her throwing form is one of her strengths — she’s explosive. She is also a hard worker. She has always tried to compete at the highest level.”

Imler believed that Hall’s persistence with her throwing craft paid off.

“She’s the type of kid who, at practice, would just keep working and working until she improved,” Imler said. “At the same time, she’s just a natural athlete. She’s had a pretty successful career, and I would say that’s due to a combination of her natural skill with her very good work ethic and determination to continue to get better and improve.”

Hall — whose personal best career throw in the javelin was the toss of 101 feet, nine inches that she achieved in her freshman year — agreed that her personal determination has been a big asset for her.

“I would say that my strength as a thrower is being very determined,” Hall said. “To learn how to spin correctly, you have to do it countless times in a row. Determination and persistence are traits that have helped me as a thrower.”

Hall — who had participated in competitive cheerleading events before becoming a school cheerleader last fall – carries the same persistence into the classroom, where she has a 4.0 grade-point average.

Hall is going on to California University of Pennsylvania, where she plans to continue her throwing career in track and field and study toward an eventual career as a physical therapist assistant.

“She’s the type of kid who is going to accomplish her goals in the future, in sports as well as in her career,” Conner said. “She will work hard.”