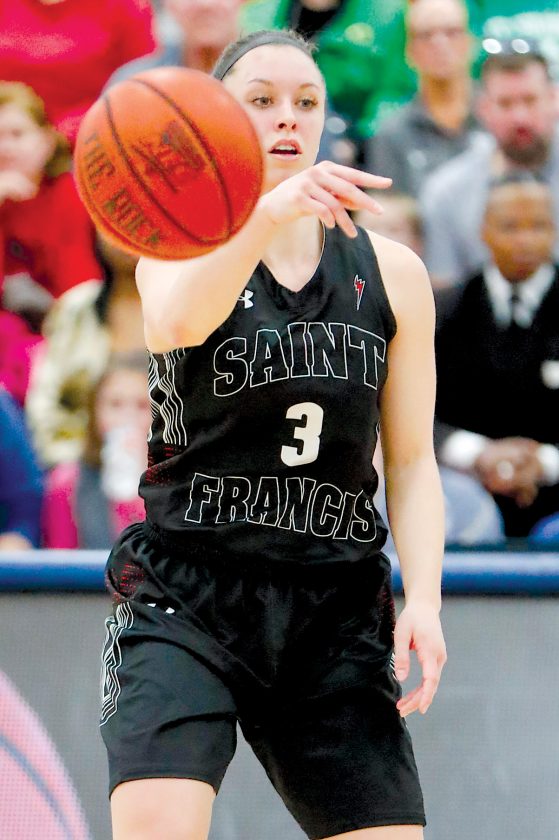 The Associated Press Bellwood-Antis graduate Karson Swogger was an NEC third-team pick as a junior for SFU.

Saint Francis University struggled down the stretch and finished with a not-so-surprising quarterfinal exit in the Northeast Conference women’s basketball tournament.

It wasn’t surprising because the Red Flash lost their last five games of the regular season, and six out of their last seven, and as such, had no momentum heading into the postseason.

Granted, four of those six losses came to the league’s top two teams — Robert Morris, which won the NEC crown for the fifth straight year and finished with a 17-1 mark, and Mount St. Mary’s, which was 14-4.

“I do not have an answer for the late-season slide, and I do not want to make any excuses,” Saint Francis coach Keila Whittington said. “We (coaches) are discussing the entire season, and hopefully we will come up with some answers in the offseason. We played RMU tough at home, and we fought until the end. We also made a great comeback versus Mount St. Mary’s at home, but we are not into settling for moral victories. We want to compete and win basketball games, as well as compete for and win championships. No one was happy with the way we ended the season.”

However, the Red Flash were clearly not the same team that it had been in the early stages of NEC play, and unfortunately, their season came to a halt in the quarterfinals.

“Robert Morris and Mount St. Mary’s are great teams,” SFU guard Karson Swogger said. “Once the regular season was over, we looked at the positive.”

In the conference tournament, SFU fell behind by 16 in the opening half before showing plenty of fight in the second half, before ultimately falling to Sacred Heart, 73-70, to end its season at 11-19.

“It’s obviously very disappointing to lose that final six games of the year, and to have it be on the defensive end, and not be able to defend and get stops,” Whittington said

Saint Francis went through non-conference play with a 2-9 mark, which included wins over Stetson and a double-overtime victory at Vermont. Once the NEC season began, SFU started with a 5-1 mark and was 6-3 through the first half of league play.

The start had the Red Flash in the top four of the standings, and ultimately it was why they got a home game in the tournament despite the season-ending slide.

“We had a great start to conference play, winning the first two games on the road. We finished the first nine games at 6-3, and we felt like we were beginning to come together,” Whittington said. “We had a good nine-player rotation of players who were contributing at the time, and we felt like we could compete with any team in the league. We respected every team we faced, and we prepared for each team, one game at a time. It was important that we did not overlook anyone.”

As teams started to key in on all-NEC third-team performer and Bellwood-Antis graduate Swogger, as well as Bishop McCort alum Haley Thomas, the rest of the team was forced to pick up its play.

Jenna Mastellone, who had seen minimal minutes in her first two years, became another scoring option as did Bishop Guilfoyle grad and Shippensburg transfer Lili Benzel.

Phee Allen came in and ran the team from the point guard spot, while freshman post players Katie Dettwiller and Sam Miller had their share of moments, as did fellow frosh Makenzie Pollard, who made the most of her brief minutes late in the season.

Meanwhile, Halie Murphy and Kayley Kovac didn’t get much time in games, but proved their worth in practices by getting the starters prepared from game-to-game.

“That’s what was great about this team — it wasn’t about any one player to try to save us,” Whittington said. “This year, it was about everybody feeling that confidence that when the ball was in their hands that they could take shots and they could make shots.”

The two Saint Francis players that will not return not season are Sam Sabino, whose scoring took a hit this year as her defensive assignments increased, and Caitlin Carroll, who played just 95 total minutes.

One area in which the Red Flash excelled was in rebounding as they won the battle of the boards in 18 (and tied in one) of 30 games this season, including 15 of 19 games against NEC opponents.

Sophomore Jada Dapaa was Saint Francis’ best rebounder. She averaged 6.4 per game, including five games in double digits with a season-high of 16.

“Definitely, looking back on the season — I think there’s a lot of positives,” Benzel said. “So, I think just regrouping and just figuring out the little kinks that we need to fix.”

The Red Flash return the core of their team that should benefit from another season under Whittington’s system.

“I feel that we were able to lay the foundation for the type of program that I want to run at Saint Francis. Our players bought into my vision for Saint Francis women’s basketball, they worked hard to prepare for the season, and they were focused and ready to play every game,” Whittington said. “We had some highs and lows, and we achieved some of the goals we set at the beginning of the year and throughout the conference season. I am excited about the future of the program because we have a good nucleus of players returning, and we are adding a five-member recruiting class.”

Which is why following the season-ending loss to the Pioneers, Whittington chose not to focus on the six straight defeats that closed out the season.

“We took some time to find the positives in this season,” Whittington said. “We had a board in the locker room that was overflowing with good things because we didn’t want our players to focus on the five losses at the time. Going into the postseason, we were in a position to host a game. We needed to see that we did some nice things this year. It wasn’t hard at all to find some great things that we accomplished this year.

With Saint Francis dismissing students from school for the semester due to the coronavirus, there will be no spring workouts.

“All Saint Francis University students were allowed to return home after classes on Friday (March 13), and all of our team members have returned home safely,” Whittington said.