No doubt about it: Flash cruise from start to finish in victory 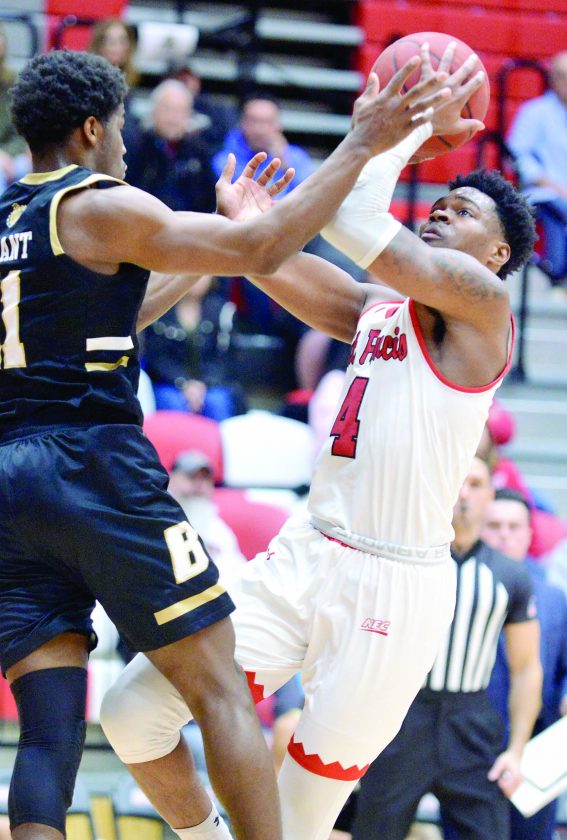 LORETTO — Laser focused and shooting lights out, Saint Francis looked like a team on a mission as it destroyed Bryant in the opening minutes of their Northeast Conference Tournament quarterfinal game.

The Red Flash scored the first nine points and were up 22-4 less than six minutes in. While the other three NEC Tournament games Wednesday night were decided by two points or less on the final possession, SFU won in a laugher, 87-61, matching the program’s largest margin of victory ever in a postseason game.

“It was a lot of fun to stand on the sideline those first couple minutes and not have to do anything,” Saint Francis coach Rob Krimmel said.

The only thing Krimmel really had to do was watch his team, the No. 2 seed, bury shot after shot after shot. The sizzling Flash hit 14 of their first 19 shots, including 4-of-6 from 3, and were crushing the seventh-seeded Bulldogs 34-13 after 12 minutes.

“That was the best start that we had all season,” SFU’s Keith Braxton said.

The most incredible thing about the blowout?

SFU’s Isaiah Blackmon, the NEC Player of the Year who averaged 21.6 points in conference play, was held to just five points, and the Flash still won by a whopping 26.

“That’s a great credit to the collectiveness of the group,” Braxton, who scored a game-high 24 points, said of the Flash’s impressive depth.

“Everybody had the hot hand tonight a little bit.”

Most notably was Randall Gaskins Jr.

The Flash (21-9) have two stars in Blackmon and Braxton, but at this time of year, teams that reach the NCAA Tournament always have a game or two where a role player must turn in a strong performance to pick up the slack.

Gaskins did that Wednesday, scoring a season-high 20 points to make up for some of Blackmon’s scoring troubles.

Gaskins set the tone immediately, hitting a jumper from the left baseline on SFU’s first possession, then a 3 from the left baseline a minute later to make it 5-0. Gaskins isn’t always the most aggressive offensive player — he’s the Flash’s best on-ball defender and an all-around catalyst — but the senior came out ready to fire away Wednesday.

“The coaches were chirping in my ear letting me know I had to be aggressive,” Gaskins said.

“To see my fellow senior do that, it’s just big time,” Braxton said of Gaskins, who had 10 points in each half.

“For Randall, as a senior having been in those big games, I’m not surprised,” Krimmel said.

Gaskins wasn’t the only role player who stepped up for the Flash. Myles Thompson and Tyler Stewart scored 11 points apiece and hit some big buckets to help SFU hold off Bryant’s rally attempt.

“Ty and Myles gave us a big spark,” Krimmel said.

Bryant (15-17) came into the night with a specific game plan — to slow down Blackmon. It worked, too, as the Bulldog defenders dogged him all night and made it tough for him to get open looks. Blackmon finished 2-of-9 from the field.

“We were keying on Isaiah,” Bryant coach Jared Grasso said. “We thought he was kind of the guy who made them go. … Obviously, Gaskins stepped up as a senior.”

Braxton had a fantastic all-around night, with eight rebounds, eight assists and four steals to go along with his 24 points.

“He’s turned himself into one of the best players in NEC history,” Grasso said of the only NEC player ever with 2,000 career points and 1,000 rebounds.

Bryant hung with Saint Francis over the middle portion of the game and got somewhat within striking distance down 45-31 at the half. The Bulldogs cut it to 52-41 early in the second half, then the Flash got a four-point possession as Stewart was intentionally fouled, hit both free throws and then a jumper to complete the trip.

It was still a 13-point game with seven minutes to go, but Saint Francis poured it on with a 14-2 run to turn it into a rout.

Saint Francis has won 20 games this season for the first time since 1991, and the team is loaded with seniors who have accomplished big things in their careers. But they’ve still have yet to reach the NCAA Tournament, and this is the last chance for Braxton, Blackmon, Gaskins and some others.

Grasso pointed out how that can be a gigantic motivating factor for players of that caliber.

“When you’ve never been to an NCAA Tournament and this is your last chance, you play at a certain level, there’s a level of desperation,” Grasso said.

The Flash definitely turned it up several notches in their tourney opener, and now they’re two games away from the program’s first NCAA Tournament berth since 1991.

Next up is No. 3 seed Sacred Heart, which visits DeGol Arena on Saturday at noon. The Pioneers beat Mount St. Mary’s on a layup with 1 second left, 61-59, to advance.

The Flash won both regular-season meetings against Sacred Heart, including a heated game at home in which two Pioneers players started a fight in the postgame handshake line.