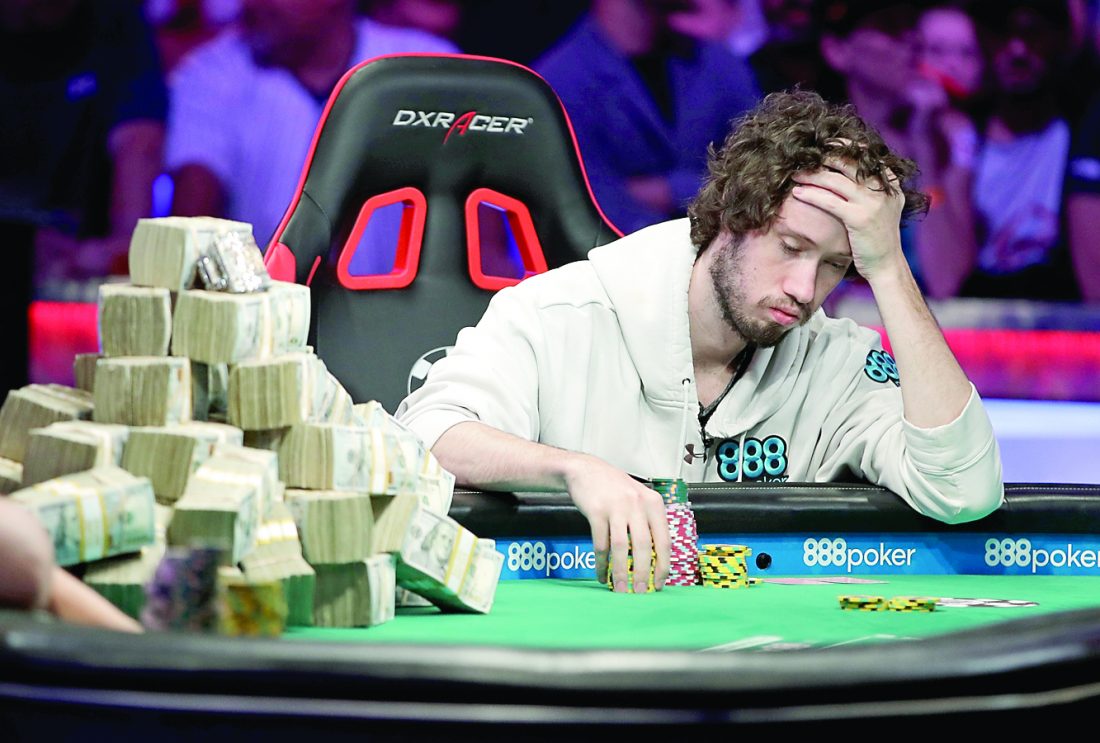 The Associated Press file photo During 2017, Altoona graduate Dan Ott made a big splash at the World Series of Poker’s Main Event.

While the rest of the sports world has come to a screeching stop, Altoona’s Dan and Dillon Ott haven’t had to make many changes in their professional life.

The twin poker pros have continued to grind away online even as Las Vegas’ casinos have shut down operations.

“The best part is that I can just stay at my house and start whenever I want and quit whenever I want,” Dan Ott said. “I don’t really love leaving to go to the actual casino. Online is much more convenient for me, and it’s where I have been sticking.”

Dan Ott made local history in 2017 when he won $4.7 million by finishing as the runner-up in the World Series of Poker’s Main Event, the Super Bowl of poker. Dillon is also an accomplished card player and has cashed in nine different professional events, including a 43rd-place finish in a World Poker Tour event in 2017 that netted him more than $30,000.

The brothers have noticed a spike in online poker lately.

“As far as online poker, it has picked up a little bit, which I expected,” Dillon Ott said. “That doesn’t mean day-to-day life isn’t more unpleasant. There are certainly people I’d like to go see that I can’t.

“I think people are playing more online poker, because sports gambling isn’t available. I think another part of it is that people have more free time. The only drawback is that they probably have less money to gamble, so that’s the only negative.”

Dan Ott agreed but stressed there are more important things than his professional life.

“There’s more people playing online poker for sure,” Dan Ott said. “It’s better on the poker side, but people are being quarantined and getting sick. It’s a pretty serious situation.”

The Ott brothers usually travel to Las Vegas at the end of May for the start of the World Series of Poker in early June.

“Right now, they say they aren’t planning on changing anything on the schedule,” Dan Ott said. “But we’ll see. It’s kind of funny, because a bunch of well-known poker players are betting on whether it will be canceled or not. People want to know what odds they can get that the whole thing is canceled.”

Count Dan as one betting on at least a postponement.

“I think there’s a reasonable chance it gets canceled, or at least postponed until the fall,” Dan Ott said. “I think the coronavirus is a bigger deal than people were making it out to be for a long time. It’s being taken more seriously now, and if the WSOP was held, a bunch of international people would be coming here, so that would be tough right now with the travel bans.”

Dan Ott pointed out that even though six-to-eight of the WSOP events are online, players must be in Las Vegas to play in them, so it’s likely they would be canceled or postponed, too. Both brothers agreed the Main Event would never shift to an online format, no matter the circumstances.

“I did have plans (to go to the WSOP) until this kind of got worse,” Dan Ott said. “Now, I’m thinking that if I go, it will only be for the Main Event, none of the side events. But I’m assuming the Main Event is just going to be postponed. I don’t think they would cancel it, but who knows how bad this is going to get. If it is postponed, I would probably still go when it is held.”

The former Main Event runner-up has been shaken by views he’s seen of Las Vegas in the past few days.

“It’s kind of like an eerie feeling,” Dan Ott said. “You see pictures, and there’s no lights, no people walking on the strip, it’s just dead. That’s crazy for Vegas, because that’s usually a pretty crazy city. To see it dead is pretty wild.”

Instead of traveling to casinos, the Ott brothers have been taking advantage of a new app that came out late last year that allows legal online poker.

“I’ve been playing on PokerStars PA lately,” Dan Ott said. “They launched in November. It’s been pretty good. The games are good. There’s some medium-stakes action, nothing too crazy. It is enough to win a decent amount, though.”

Not many of the players using the app have the experience the Otts do.

“You definitely notice a change in action, and you run into a few more recreational players,” Dillon Ott said. “Things have gone pretty well with keeping up with the game and studying, playing a lot and keep getting better.”

With plenty of people stuck at home and no sports on television, Dillon Ott said online poker can make a good habit, if you are responsible.