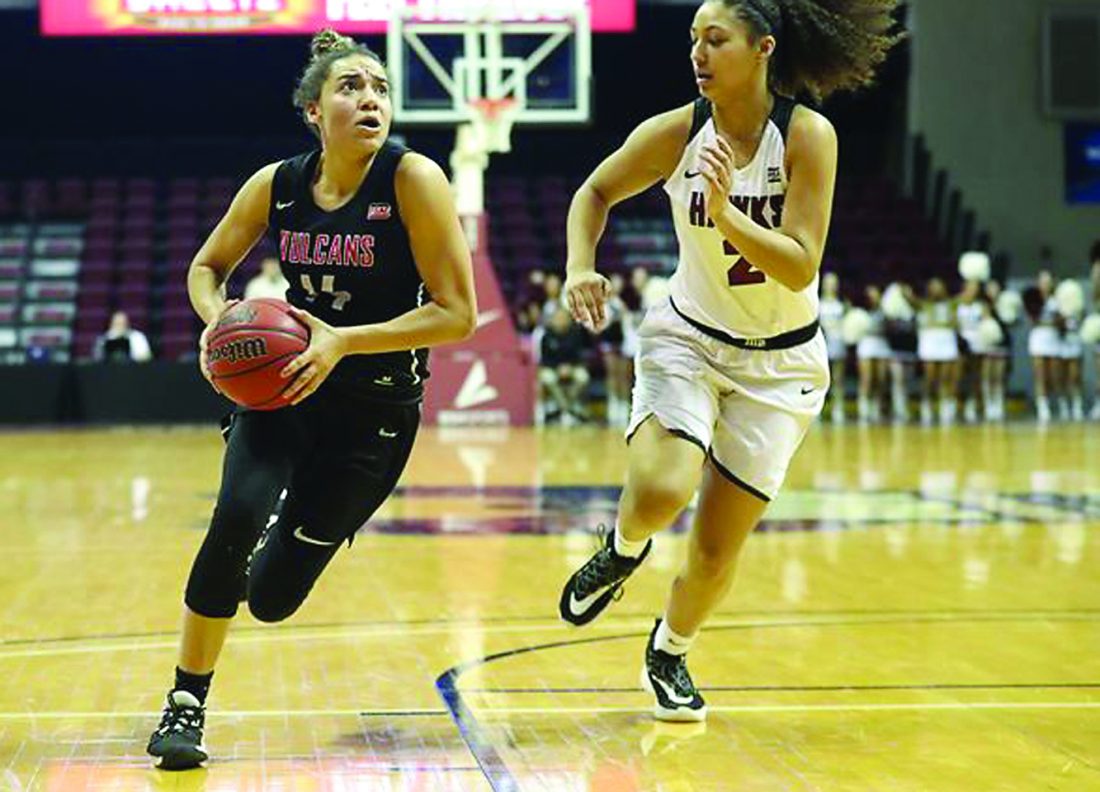 Photo courtesy of Jeff Hinish/Cal U Athletics Altoona graduate Olivia Hudson takes the ball to the basket for Cal against IUP in the PSAC playoffs.

The last time Olivia Hudson was playing in a competitive basketball game, she was playing at just about the highest level she’s ever performed.

The Altoona graduate had the California University of Pennsylvania women’s basketball team on the verge of an upset over IUP in the quarterfinals of the PSAC Pennsylvania State Athletic Conference.

Hudson scored the final nine points of regulation for her team and had the Vulcans up by three with just seconds to go before IUP tied the game and eventually won in overtime.

Hudson finished the contest with a career-high 25 points.

“I definitely was playing my best basketball at the end of the year, and my teammates really helped out with that,” Hudson said. “They got me comfortable as a freshman. A couple girls were really good with making me feel confident with myself. We practice all the time, and they made me a better basketball player.”

Hudson wasn’t the only local freshman making a splash for the Vulcans.

“I put in a lot of extra work and worked hard during practice,” Herrington said. “It finally paid off, and getting to hear my name in that starting lineup was an amazing experience.”

Herrington ended up starting 13 games and playing in 27, while averaging seven points per contest.

“It was amazing to be able to live out a dream of playing at the collegiate level,” Herrington said. “It was awesome.”

Herrington and Hudson were AAU teammates during their high school years.

“It was a really good transition having Halle,” Hudson said. “Even when we didn’t have practice, her and I got some extra shots up since we were already comfortable with each other.”

Herrington is already looking forward to getting another shot at IUP.

“It was neck-and-neck the whole time,” Herrington said. “Going into overtime, it was a crazy atmosphere, but we’re coming after them next year.”

Despite the quarterfinal loss, the Vulcans earned a spot in the NCAA Division II tournament and were set to play Gannon in the Atlantic Regional.

Cal lost to Gannon by 26 in the teams’ first matchup but rebounded to lose by just four on Feb. 29.

Then, as the team practiced in Erie the night before playing the game, the news came down to Cal coach Jess Strom that the game and the rest of the tournament had been canceled due to precautions over the coronavirus.

“You put in all that time since September, and then it’s just over,” Hudson said. “I felt really bad for the seniors, too. They didn’t get to play their last game. We really wanted that game to get back at Gannon. I’m just glad to still have three more years.”

Herrington and Hudson are determined to make those years successful, but offseason training has already become a challenge.

“I’ve got to get in the gym and put in hard work and effort,” Herrington said. “Working in the weight room is really important, too.

“It’s tough not being able to get into the local YMCA for a gym, you’re just hoping for nice days to play basketball in your driveway. I’m starting to lift in my basement, and I’m trying to keep up with my running.”

Hudson said even when she can’t get to a gym, she usually has a basketball in her hands.

“I need to work on ball-handling,” Hudson said. “I have to get to the basket and get some better shots. I just want my game to be a little better, so we can have a nice run in the NCAA Tournament.”