First and foremost: Penguins’ Lafferty blazes a trail for the area 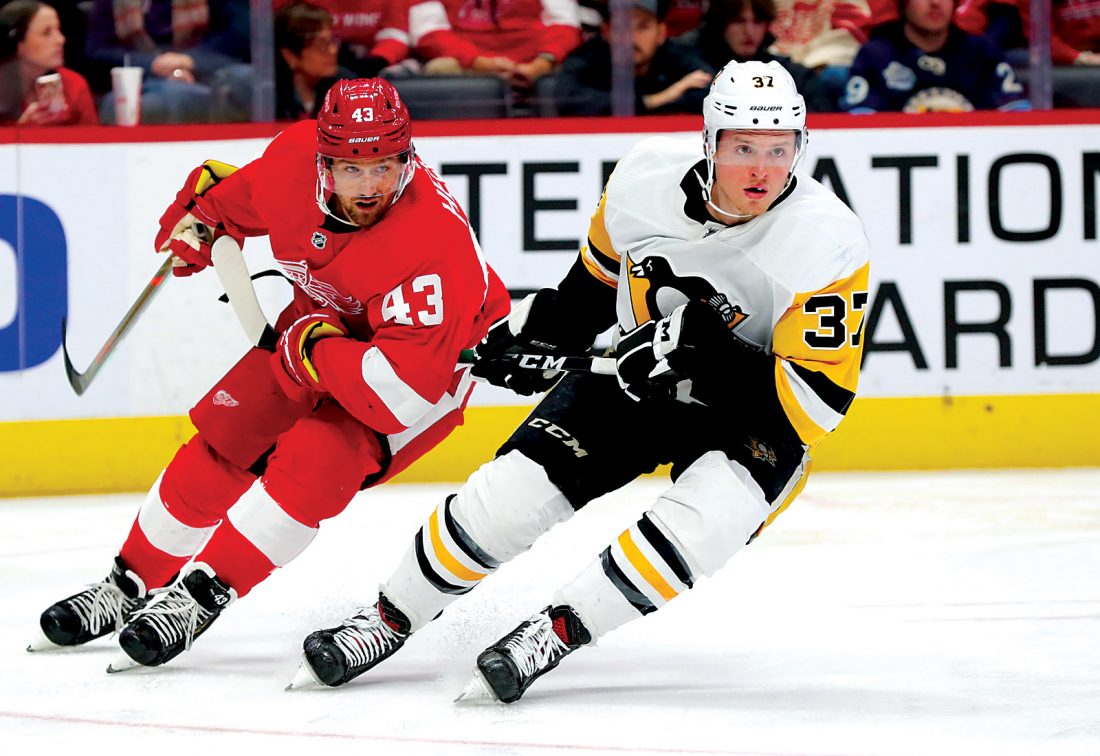 The Associated Press Hollidaysburg native Sam Lafferty has adjusted well to his first season playing for the Pittsburgh Penguins in the NHL.

Being the first person from an area to accomplish something big makes one a local legend, someone to be admired and someone who has proven to everyone that, hey, the dream can come true.

Sam Lafferty is that person for the Blair County hockey community, a bright star whose historic feat making it to the NHL serves as great inspiration to everyone who puts on skates in this area.

“When a local kid makes it all the way, I don’t care what sport it is or if they’re a musician or anything, when someone makes it to the highest possible level, that’s inspiring to people,” said Dave Weaver, a former longtime local youth hockey coach and Lafferty’s stepfather.

“It gives people the hope and teaches people if you work hard, you can do this.”

Lafferty, a Hollidaysburg native, is the first hockey player from Blair County to play in the NHL. He didn’t just get there, either. He got there with the local team, the Pittsburgh Penguins, making his story even more amazing.

Many years from now, Lafferty will be able to look back on his achievement of being a local trailblazer. Kids who grow up in this area playing hockey will forever see his name, hear his story and dream about one day possibly being the next Sam Lafferty.

For now, though, all of that local legend stuff is hard to “digest,” as Lafferty put it when asked. He’s merely a 25-year-old who’s just trying to earn a full-time spot on the Penguins’ roster — rather than being shipped back and forth between the minors — and to see just how good of a player he can be in the NHL.

“The biggest thing is just having the experience of playing at the NHL level,” Lafferty said of where he can improve. “It gives you more confidence to know that you can play and belong at that level.”

Lafferty has indeed proven he belongs, and he’s very thankful to all of the people in this area who helped him get to where he is today.

“One thing I do know is that the area and the local programs I played for growing up and that whole community at Galactic Ice, there are so many people who had such a hand in this,” Lafferty said by phone from Phoenix, where he lives in the offseason.

Lafferty is back home right now because of the coronavirus, which has shut down the sports world, and awaiting the return of the NHL. He’s doing the social distancing thing, keeping to himself as much as possible and following the workout plans devised by the Penguins’ strength coaches.

When some sense of normalcy does resume, Lafferty expects there will be a training camp for NHL players, then the league would jump right into the playoffs. Whether he’ll be on the Penguins at that point remains to be seen.

Lafferty has appeared in 50 games for the Pens, scoring six goals and adding seven assists for 13 points.

“I think I’ve definitely grown quite a bit as a player this year,” he said. “I’m asked to play a certain role for the team — to go out and bring a ton of energy and play physical.”

He’s handled his role well when called upon, while dealing with the uncertainty of being shuttled between Pittsburgh and the minor league Wilkes-Barre/Scranton Penguins.

“I’d be lying if I said it wasn’t hard,” Lafferty said of all the movement. “But at the same time, looking at the Penguins’ organization and how they handle players coming up through the ranks, they never put guys on the fast track. They make sure you develop at the pace you should develop at.”

Lafferty’s hockey development started when his mother, Jill, first took him and his brother, Charlie, to Galactic Ice in 2001 when he was 6 years old. Weaver was the general manager at Galactic Ice and wound up marrying Jill two years later.

Weaver coached Lafferty throughout his youth career, and the fact that his stepfather worked at an ice rink meant that Sam was there quite a bit.

“With any kid, what their parents do for a living influences them,” said Weaver, now the head coach of the Montana State collegiate hockey team. “I went to the ice rink every morning, and in the summers, he and his brother went also.

“Certainly he got to skate whenever he wanted to, and in the summers for sure he took full advantage of that. He would skate with his buddies, and his buddies would come off to get a soda or rest, and he was still on the ice. He just loved to be on the ice and skate.”

Lafferty also was a great all-around athlete growing up, plus he always had a strong focus on what he was doing and a great work ethic.

Combine all of those things, and it’s what makes up most athletes who go on to reach the professional level.

“To become a professional athlete, you need God-given talent, you need a strong will to succeed and you also need to take advantage of the opportunity in front of you,” Weaver said.

“He has the work ethic. I’ve coached for 20 years, and I’ve seen very few kids with a similar work ethic. And whatever he was doing, he has the ability to focus.”­

With Weaver and some others leading the way, the local youth hockey programs grew stronger and stronger in the years since Galactic Ice opened.

“I started at Galactic Ice in June of 2000 when it opened, and I saw exponential growth the whole time until I left in 2015,” Weaver said. “And I can only imagine it’s still growing.”

As with any relatively new sport in a community, it helps when one breakthrough player reaches great heights to send the message of hope to everyone else who follows.

Lafferty has done that for hockey in Blair County.

“Sam showed everybody that you can make the NHL from any town,” Weaver said. “You don’t have to be from Minneapolis or Boston or Pittsburgh. You can make it from a small Pennsylvania town and make it to the highest level of the sport.”

Only, however, if one has the right attitude. That, along with his hockey skills, are a big reason why Lafferty was able to achieve his goals.

“Somebody’s gonna make it, why can’t it be you?” Weaver said. “That’s the message that I used to say to him, and I hear him say it to other people.”

Now that he’s made it to the NHL, Lafferty’s goal is to stick and enjoy a long career there. He was asked what the biggest difference is between the minors and the NHL, and as with most sports, he said the answer is consistency.

“At times there does feel like a pretty big difference,” he added, “but a lot of who makes it is can you find a niche at the NHL level. … Right now (my niche is) bringing a ton of energy, basically disrupt the other team and chip in offensively whenever I can.”

Lafferty said most of his family now lives in Montana, and he lives in Phoenix. But he does come back to this area on occasion.

“It’s always nice to get back to Galactic Ice and see everybody in the Hollidaysburg and Altoona area,” he said.