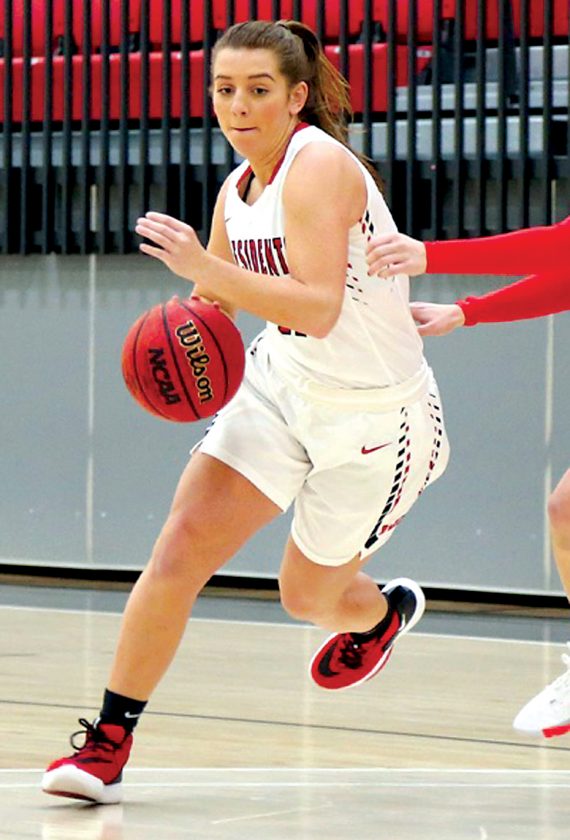 Courtesy photo Central’s Hannah Johnston played for the Washington & Jefferson basketball team (left) in the winter after starring on the soccer team in the fall.

Growing up, many kids will try a myriad of different sports until they find the one or ones that they enjoy.

If an athlete decides to play a sport in college, more often than not, they decide on just one sport that they are willing to dedicate themselves to for four years.

Altoona Area High School graduate Maura Skelley, Central graduate Hannah Johnston and Glendale graduate Cierra O’Shell all went to college with the intent on just playing one sport. However, it didn’t take long before they found themselves longing for something more.

Skelley, a sophomore communications major with a minor in marketing, decided to attend Saint Vincent College first, and then to play on the tennis team.

“When I was picking colleges, I knew I wanted to play (tennis) if I could, but it wasn’t a deciding factor,” Skelley said. “Whenever I visited Saint Vincent, I just liked the feel of it. Being able to play tennis there was just a plus.”

In her two years with the program, Skelley has made her mark as she was named to the All-Presidents Athletic Conference second team as a freshman as the No. 3 singles player after going 8-4, and then jumped up to the first team this past year as the No. 1 after going 9-3.

In doubles action, she mostly teamed up with Lucy Bujdes last year to go 6-7, and was with Angela Popovich as they were named to the first team both years after going 8-5.

“Maura came in as a freshman and immediately challenged for the No. 1 spot,” Saint Vincent tennis coach Brian Niemiec said. “She didn’t play No. 1 that year, but she contributed heavily … This year when she came to camp, it was kind of a shoe-in that she was going to be our top player.”

“I was very fortunate that my tennis coach in high school and college are very laid back,” Skelley said. “… My coach (Niemiec), it was his first year coaching the women’s team so he was just as new to it as I was. So, he was a lot more laid back than I expected.”

It was actually Skelley’s assistant tennis coach, Jym Walters, who recruited her and was also the one who saw the athleticism in her and asked her to try the sports he is the head coach of, lacrosse.

“He is notorious for recruiting players from other random teams who just seem athletic,” Skelley said of Walters.

The sophomore played in just five lacrosse games her first year, and recorded one goal on two shots from her attacker position, while also tallying two ground balls and two draw controls for a Bearcat team that finished 4-8.

“It really is unfortunate that the season got cut short (this year), because she would have definitely helped us out on the defensive side,” Walters said. “Actually, we’ll be graduating three defenders, so I’m actually looking for Maura Skelley to start for us next year as a junior.”

How she ended up being recruited is a story in itself as Johnston had her Central career ended in the PIAA state playoffs by Carlynton, who was coached by Frank Zebrasky.

“Funny story, I actually kind of fell into Hannah, believe it or not,” W&J women’s basketball coach Jina DeRubbo said. “… He (Zebrasky) calls me up and is like ‘Jina, … we just got done playing, and we played against this kid and I think she’d be perfect for your program.’ He described the way that she played and it was my kind of player. So, I never saw her play a high school game because Carlynton beat them (Central) that night (36-33) … He just went on and on about how she was the perfect kid for our team.”

After a year of getting acclimated to college basketball and college in general, Johnston made the decision to go out for the soccer team after a new coach (Scott Gerseny) was hired.

“I wasn’t sure that I would have enough time. I was worried about all the school stuff and playing basketball,” Johnston said. “They (soccer team) had just hired a new coach, so I figured this was the perfect time because he didn’t know any of the girls.”

It all worked out for both Johnston, who was named to the All-PAC second team as the center back this past year, and the team as the junior has started all 36 matches she has competed in. W&J went 9-9-2 in her first year as a sophomore and 6-9-3 this past fall after Kendra Jones took over as head coach.

“I think she’s a fantastic team player. She certainly puts the team first and is willing to do whatever is needed,” Jones said.

So, while her initial hesitation to play two sports was because of schooling, Johnston proved to be more than capable as she was named a CoSIDA Academic All-District representative this year, and has twice been named to the PAC Fall Academic Honor Roll.

“It’s really all just about balancing things well,” Johnston said. “Soccer and basketball is what I like to do in my spare time. So, that’s pretty much all I do is school and soccer and basketball. It’s what I enjoy, though, so that’s kind of why I balance it.”

On the basketball court, Johnston admittedly was held back due to her own self confidence as she played in just 19 games and 9.4 minutes per contest her rookie year as the team went 22-6.

“My thing definitely has always been my confidence,” Johnston said. “I think that was something that definitely kept me from playing a lot my freshman year.”

Johnston has gotten better, and so too has the team, the more minutes she’s seen as she owns career averages of 19.9 minutes, 5.6 points, 1.2 assists, 3.3 rebounds and is an 82 percent foul shooter and 42 percent from the floor.

Once she was on campus, the softball coach (Jason Kern) began recruiting her to join the his team as well — something O’Shell didn’t even know was possible.

“The softball coach asked me, ‘Hey, you were pretty good in softball, would you be interested in playing,'” O’Shell said. “I was like, ‘Heck ya.’ I didn’t know I had the option to play two at the time.”

The former Lady Viking who has started 45-of-61 career games, has always gotten the minutes for DuBois and has made the most of her time. Through three years, she is averaging 24.5 minutes, 8.6 points, 2.6 assists, 2.8 rebounds and 1.0 steals.

“I think that Cierra has developed into a good basketball player,” Penn State DuBois women’s basketball coach Pat Lewis said. “She came here with a good, sound base. She has improved every year. She was a team captain this year. She works hard at all practices … She’s the type of kid that you can build a team around.”

O’Shell was awarded the Penn State University Athletic Conference Rookie of the Year awards in both sports following her freshman seasons.

On the softball diamond, O’Shell, who has twice been named to the all-conference team, has been a key piece to a program that had only been around one year before she came. For her career, she is hitting .366 with 63 hits, 45 runs scored, 21 RBIs, eight doubles and seven triples in 60 games.

In the second season, the team made big strides as she finished 20-15 and lost in the PSUAC title game to Penn State Brandywine and then lost two games in the USCAA Small College World Series.

“Every team has a heart and soul, and I think Cierra falls into that category for softball,” Kern said. “She’s somebody that the younger kids look up to because she’s been part of the softball program for three years.”

In addition to balancing basketball and softball, O’Shell is also a member of the Army National Guard and had to spend several months in two different locations with her basic training at Fort Sill in Oklahoma, and her advanced individual training taking place at Fort Lee in Virginia in the fall semester of her sophomore year — thus the reason her hoops season was cut short.

“I left in the summer, and my graduation was Jan. 11,” O’Shell said. “So, I came home and hopped right into basketball. Obviously, I wasn’t starting then, because I hadn’t done anything in months, but I just jumped right back into games as soon as I got home.”

O’Shell is perfectly content with the hectic schedule that playing two sports brings.

“I feel like I don’t really have time to (take a break),” said O’Shell, who’s been named to the academic team every semester. “At the same time, I don’t mind. It’s just something I am used to. I love sports so much that that kind of is my release and my getaway. I don’t really feel the need to take a breath when I’m having so much fun doing it.”