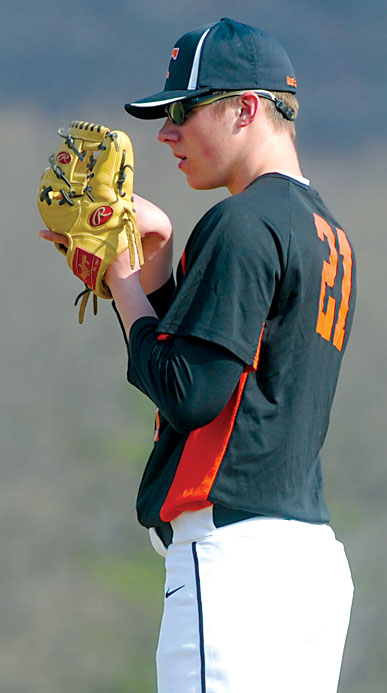 Mirror file photo Senior Kevin Lehner and the Tyrone baseball team are coming off an 18-4 season.

Editor’s note: The fate of the spring scholastic sports season is very much in doubt due to the coronavirus. The Mirror is publishing the preview capsules to at least recognize the athletes who are part of the various teams throughout the region:

Strengths: “Some very dedicated players who put in the necessary work to play at this level.”

Concerns: “Lack of experience, especially in the varsity pitching area.”

Overall outlook: “We always want to compete for a district championship. We have come up short numerous times recently vs. State College. The goal is to find a way to be playing our best ball in late May.”

Strengths: “We return a lot of experience from a district championship (D5-9 3A) team last year. Those core guys have experienced championship-level play in the fall and winter sports and we look to continue that level of competition and success in the spring. It’s always challenging playing in the LHAC, but we cherish the opportunity to play in one of the best baseball conferences in the state.”

Concerns: “Improving our offensive and defensive efficiency from last year. We took strides in the right direction last year, but we need to see continuous commitment to improving on a daily basis.”

Overall outlook: “We look forward to competing in the LHAC and look forward to the challenges that presents. The student athletes have high expectations of themselves as do the coaches. We are excited to hit the field and play ball.”

Strengths: “We return a solid group of players that have put a tremendous amount of effort in the offseason. This team has a ton of senior leadership which will be needed as we progress through the season.”

Overall outlook: “We had a tremendous turnout during our winter workouts. This group of players is extremely dedicated to the game. If they continue to work hard to improve each day, I believe we will have a promising and rewarding season.”

Strengths: “Hopefully some of the seniors can step into leadership roles and lead by example and help the freshmen and sophomores.”

Concerns: “Lost six seniors who started since they were freshmen.”

Overall outlook: “It will be a rebuilding year, but we’re looking to improve from the first day until the end of the season. I’m also expecting a big season from Jake Zazvrskey, who will be a four-year letterman.”

Concerns: “Depth and replacing a couple of key positions from last year.”

Overall outlook: “We expect a good year. We have some key starters returning from last year as well as some talented newcomers. We believe our younger kids will step in to fill the void of our graduating seniors from last year.”

Strengths: “We have some guys with varsity experience who understand the level of competition we’ll be facing on a daily basis, particularly in conference play. To add, we’ve got a coachable group of guys who are anxious to compete.”

Concerns: “Playing well early on and keeping our pitchers ready to roll as the schedule changes throughout the course of the season.”

Overall outlook: “Our goal is to play competitive baseball each time we hustle out on the field. We’re looking to be in some tight games and overcome any growing pains along the way. This group has committed to working hard each day, which helps as we turn to some inexperienced players to step up. Overall, we look forward to the season ahead.”

Strengths: “We have a solid group of starters returning. Many of them have worked really hard in the offseason in the weight room, in the cages, and playing other sports. Our team will play as hard as they can like always and control what they can control. I like the way how some of the younger guys are competing right now and pushing for spots. Our defense is shaping up to be one of the best we have had, but they still need to prove themselves come game time. Our overall team speed should be outstanding as well.”

Concerns: “We have a lot of potential on the pitcher’s mound, but we need guys to step up, demand the baseball and do their job. With the defense we have, throwing strikes will be critical. We will still be extremely young playing against many well-seasoned Mountain League teams.”

Overall outlook: “Our league will be tougher than it has ever been. We hope to keep working hard in practice and finding the right mix of players as there is a lot of competition for jobs. We will get better as the season progresses and hope to be playing our best baseball at the end of the year to compete for league, district, and state titles.”

Strengths: “Probably a little faster and more athletic collectively than we have been in the past, so we’re excited to see what kinds of options that may potentially open up both offensively and defensively for us.”

Concerns: “As always, the weather determines a lot of the time the trajectory of your season. Playing four or five games during a given week doesn’t just impact those individual days, but a lot of what happens the following week.”

Overall outlook: “I like the way this group has approached the beginning of this season. We have a nice mix of guys that have been around for a while with younger guys that are going to step in and contribute right away, and their workman-like attitude and attention to detail has been very nice to see. We played in some meaningful games for the first time in a while last season, and we’ll be looking for the guys who were integral to helping us make that run last year to instill and carry over that competitive nature that comes with making a push toward the playoffs.”

Overall outlook: “Strong leadership and experience to help us go deep into the playoffs.”

Strengths: “Experience, defense, and pitching depth. We return seven starters from last year. A couple of players have started since ninth grade and have played a lot of varsity baseball. Hopefully that experience pays off this year.”

Overall outlook: “Returning seven starters from last year’s 14-7 team, we look to improve on our quarterfinal loss in the district playoffs. If our top three or four pitchers throw like they are capable of, and a couple of the younger players step up and contribute, we should have a winning season and be in great shape come playoff time. Our team goals are to win the ICC and win a district championship.”

Strengths: “Strong core of sophomores that played varsity last season and have a lot of experience.”

Concerns: “Extremely young overall. We’re waiting to see who will take on the leadership-captain role.”

Overall outlook: “We like the way these guys get along, and with a lot of the sophomores seeing plenty of playing time, the unity will only get stronger over the next couple of years.”

Other returning players: None

Strengths: “With no returning players from last season, the freshman players have stepped up and taken on the role of leaders.”

Concerns: “Lack of depth and experience at all positions and pitching.”

Overall outlook: “With lack of depth and experience, all I can ask for is for the team to go out have fun keep their heads up, be enthusiastic and embrace the experience they are about to gain to build better character and transform them into better players for their remaining years playing at the varsity level.”

Strengths: “We have a good group of seniors as well as a deep lineup of pitching. On top of this, I believe that the team has great chemistry as well as a lot of experience.”

Concerns: “Uncertainty on the current situation and the likelihood of having a season coupled with lack of required practice will make it difficult to start the season strong.”

Overall outlook: “Outside of everything not baseball related, I have very high hopes for the season as well as this group of athletes.”

Strengths: “Pitching depth. Versatility with being able to move players around in different positions.”

Concerns: “Youth. As always, adjusting from indoors since we play in the north is always tough on kids trying to play a warm-weather sport in the cold.”

Overall outlook: “I think we have the potential to be a great team. We have a lot of varsity experience from last year. We plan to compete. I believe we have a solid squad. They stay late to put in the work it takes to win. I’ve very happy with how we look.”

Concerns: “Consistency at the plate and on the field.”

Overall outlook: “Team play, doing the little things to accomplish big things. Our goals are always to become a complete team and contend for a league and district title.”

Strengths: “We are a very fast team. We have a lot of pitching depth.”

Concerns: “We are a young team and only have three returning non-pitching starters.”

Overall outlook: “We are young but should be a force. I think we will be in every game and should make a run for the conference championship.”

Concerns: “Young and inexperienced at several positions. Several younger players will see a lot of time. How they mature as the season plays out could determine our success.”

Overall outlook: “We want to be competitive within at LHAC and improve on last season.”

Overall outlook: “Good. We should be competitive.”

Concerns: “To be successful in the batter’s box and cut down on our strikeouts as a team.”

Overall outlook: “We want to win our conference and be in position to play in the District 6 2A playoffs.”

Strengths: “Experience. We are returning nine letterwinners this year and six of those are two-year letterwinners.”

Concerns: “Pitching. We are not very deep on the mound.”

Overall outlook: “I am looking for our veteran leadership to step up and push our team to work hard and improve every day.”

Strengths: “Our biggest strength is our numbers. Kids are competing for positions, and it makes them work so much harder. Also, we return a lot of experience and leadership. The young men have put in a lot of work in the offseason. They are very goal-oriented.”

Concerns: “Replacing two big bats in our lineup and not having a letdown from last year. Learning how to overcome winning. It doesn’t just happen. The Mountain League is so tough that any team can come out on top. We have to stay focused.”

Overall outlook: “The kids want to achieve so much. They have put in the work. We want the same goals as always — playing our best baseball at the end of the season and league and district championships. We’d also like to make a big run in the state playoffs.”

Concerns: “Trying to keep everyone healthy this year.”

Overall outlook: “We hope to be more competitive this year and compete in our league.”