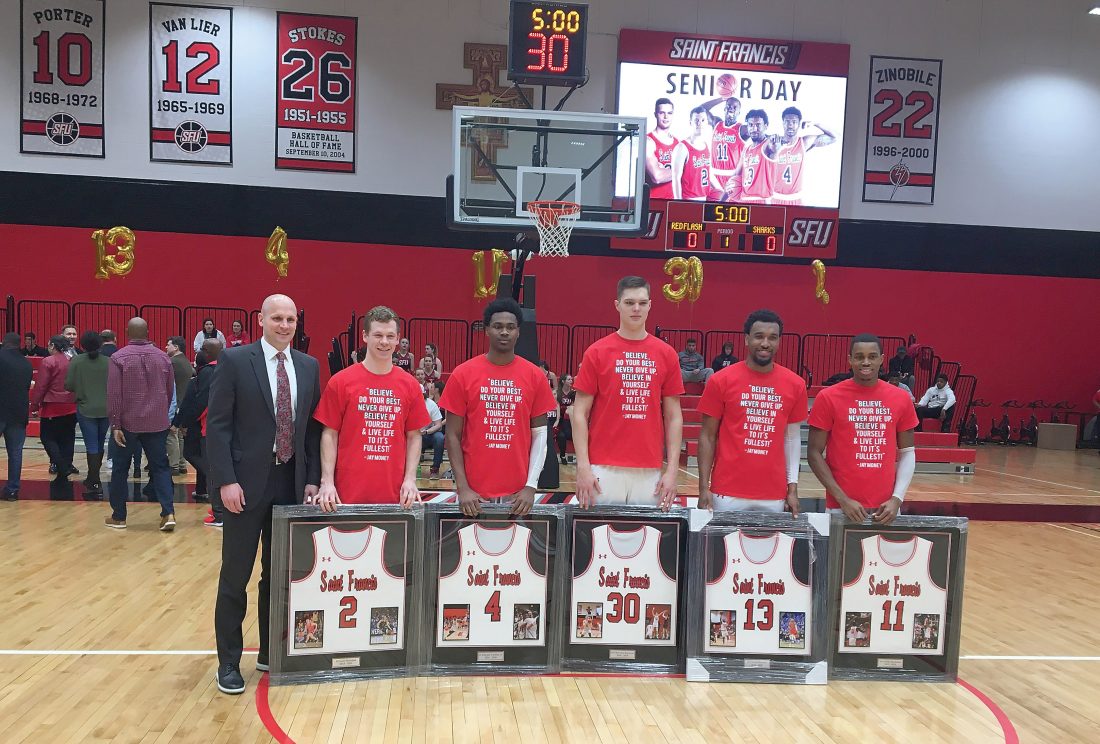 LORETTO — You’ve got to go all the way back to the legendary career of Maurice Stokes in the 1950s to find a senior class that’s won more games than the current crop at Saint Francis.

The seniors earned their 71st career victory and seventh in a row in a crucial game Sunday afternoon against LIU, 74-71, before 1,628 fans on senior day at DeGol Arena.

The Red Flash (12-4 NEC) clinched at least the No. 2 seed in the Northeast Conference Tournament and kept their regular-season title hopes alive as they pulled even in the loss column with first-place Merrimack (13-4).

The Flash have two games left, while Merrimack has one. Saint Francis can capture its second straight NEC regular-season title if it wins at home against Mount St. Mary’s on Thursday and at Robert Morris on Saturday, plus Merrimack loses at home to Central Connecticut State on Thursday.

The last part of that equation is highly unlikely, given that CCSU is just 4-25 overall, while Merrimack is 19-11. Still, CCSU has been surging of late, winning two of its last three, so if it can pull an upset, the Flash would have a chance to win the title.

Regardless of that, SFU can claim the No. 1 seed and home-court advantage throughout the NEC Tournament merely by winning at Robert Morris on Saturday. Merrimack is ineligible for the tournament as a first-year Division I program, so the Flash just have to finish second to capture the No. 1 seed.

Saint Francis squandered a 13-point lead in the second half Sunday but escaped with a big win thanks to clutch shots late by Isaiah Blackmon and Keith Braxton.

The seniors — Braxton, Blackmon, Randall Gaskins Jr., Scott Meredith and Deivydas Kuzavas — have combined to take the Red Flash program to new heights during their careers. Stokes’ senior class won 78 games, so the current group isn’t far behind with 71.

This current group also has won an NEC regular-season title (last year), has a chance to repeat this season and has played in two NEC Tournament championship games (2017 and ’19) so far.

The only thing the seniors haven’t accomplished has been reaching the NCAA Tournament. They’ll have a golden opportunity to check that off the bucket list up in a couple of weeks, as they’ll be the favorites entering the conference tournament.

There have been so many special things about this senior class, but here’s yet another: Four of the five seniors have hit a game-winning shot at some point during their careers (Kuzavas is the lone exception), so their contributions have been spread out.

Meredith, a graduate senior who already has his master’s degree, credited the players before this senior class for establishing the strong foundation that currently exists at Saint Francis.

“We’re able to keep and retain players as we’re here, so we’re able to grow through the four years,” he said.

It cannot be overstated how important that has been to Saint Francis, during an era in which players at low-major programs have been transferring en masse to bigger schools.

The Flash have lost only a few players to transfer during Krimmel’s eight seasons as head coach. By comparison — and for various reasons — Robert Morris has had more than three dozen players transfer in the past decade.

Krimmel not only has crushed it in recruiting, finding diamonds in the rough such as Braxton and Blackmon, he also has been able to keep those and other key players on campus for their entire careers.

Braxton, for instance, has been a star for several years at SFU and could have had opportunities to leave. He stayed, has become a Saint Francis legend in his own right and has helped the program achieve big things.

“We’ve built a real culture here at Saint Francis,” Meredith said. “It’s hard to find that. … It’s hard to leave that whenever we’re that close.”

Krimmel wouldn’t have it any other way.

“If we had a revolving door of players, it would be very difficult for me to work on what I believe college is about,” the coach said.

Krimmel has done an exceptional job developing his players so that they improve year after year, and by the time they’re seniors, they are much better players than when they arrived on campus.

That wasn’t always the case at Saint Francis. Prior to Krimmel taking over, one of the biggest issues the program faced was that many players were pretty solid as freshmen and yet never developed a great deal throughout their careers.

“At the core of what I personally believe in and what college is about, it’s about development,” Krimmel said.

Krimmel started his five seniors Sunday, and he knew they’d have the right frame of mind entering the key game. Following practice Saturday, he allowed all the seniors to speak, as per tradition, and the coach said it was the shortest senior day speech he’s ever had.

“The message of it was: We still have business to take care of,” Krimmel said.

The Flash (19-8 overall) got off to a slow start and trailed most of the first half. Gaskins had a fantastic start, though, and helped keep the team in the game with 12 first-half points, matching his season high point total in one half.

“My teammates saw me, I was open. … I shot it with confidence,” said Gaskins, who finished with 15 points.

LIU (13-16, 8-8) beat Saint Francis in its gym last month. The Sharks have one of the league’s best players in Raiquan Clark, who scored 26 points, and they battled back to grab a 69-68 lead on his three-point play with 2:38 remaining.

The Flash had an answer as Blackmon, who finished with 21 points, buried a huge 3-pointer 13 seconds later, putting the home team on top to stay. It was 71-69 when Braxton drilled a key jumper with 25 seconds to go to make it a two-possession game.

Braxton made only 5-of-16 shots on a tough day, but he hit that big one and finished with 14 points.

“My confidence level was very high,” Braxton said. “I’ve got to give a big shout out to my teammates and my coaches and everybody. I think I missed like four 3s in a row … and they were just saying, ‘Keep shooting out there, man, you’ve got it, we trust in you, we believe in you.'”

LIU answered Braxton’s basket with one of its own to close within 73-71 with 15 seconds left. Braxton was fouled and hit 1-of-2 free throws, giving the Sharks one last chance down three, but Virshon Cotton missed a 3 trying to tie it with 2 seconds to go.

“It just shows that mentality that the senior class brings in here,” Braxton said of the balanced victory. “It trickles down to the younger guys. We want everybody to be great, and we’re going to compete til the end.

“Our guys want to win here,” Braxton said, “and the senior class has set that tone.”