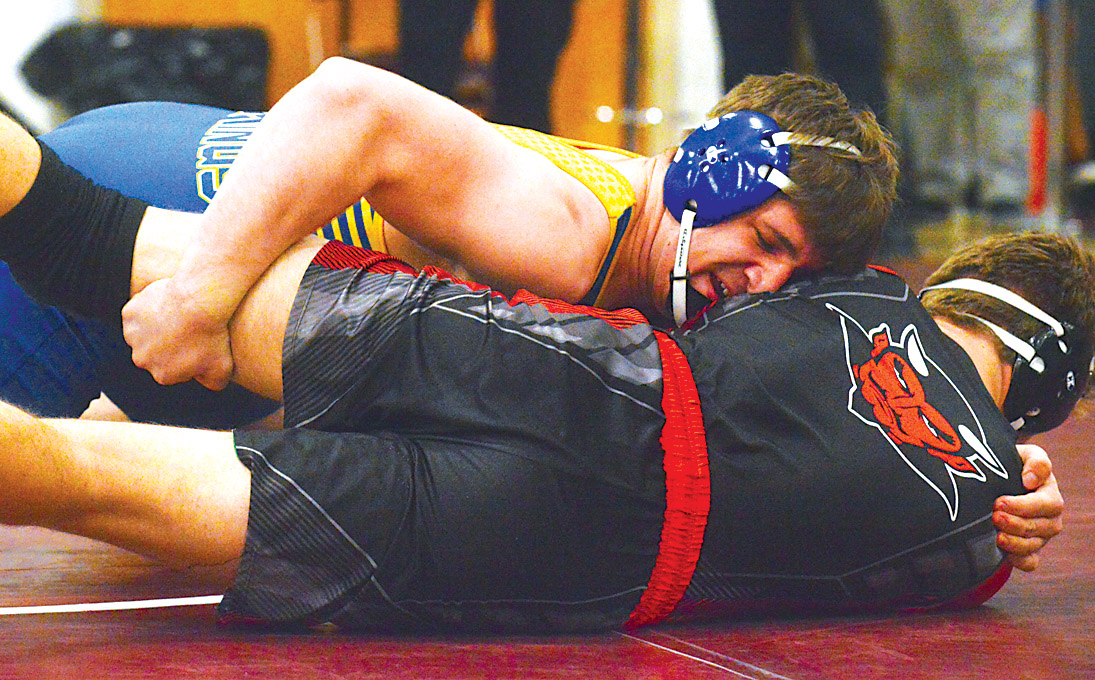 Central Cambria’s Zach Brandis has been hampered by a knee injury that limited him to 15 bouts and a 10-5 record going into the District 6 Class 2A Tournament.

Brandis certainly made up for lost time on the first day of the tourney.

The Red Devil senior, seeded seventh at 113, earned a pair of 3-2 decisions, including a quarterfinal win over Mount Union’s second-seeded Bryce Beatty on Friday night at the AAHS Fieldhouse.

“It felt good,” Brandis said. “Every time I’ve wrestled Bryce, it’s always been like a point or two. He’s beaten me for three years. I this time I was more aggressive. I shot more. I blocked his shots.

“I got injured at the beginning of the season, so my record got messed up. But I didn’t let it bother me. This season has been a tough season, for sure. I try not to let it get me down because in the end it doesn’t matter.”

Brandis is one of 23 wrestlers from the Mirror coverage area who advanced to today’s noon semifinals and qualified for next week’s Southwest Regional Tournament. The top six at every weight qualify for regionals.

Glendale advanced five to the semifinals and is in third place in the team standings with 91.5 points. Westmont Hilltop leads Bald Eagle Area by one point, 96-95.

“We did pretty good,” Glendale coach Billy Dubler said. “We’ve got to get these guys in the consolations to come back through. We’re fighting. We’re battling. We’re in the thick of things. The guys wrestled hard and gave it their all. That’s all you can ask for.”

“I’m pretty happy with our first day,” Tyrone coach Terry Tate said. “After the seeds came out, I thought we’d have a chance to get four in there. I kind of expected it, but with the district tournament you’re never guaranteed anything.”

Glendale nearly had another semifinalist in Tristan Rutter, who escaped late against Westmont Hilltop’s Noah Korenoski to tie the score, 4-4, and send the bout into overtime. Korenoski got a takedown at the edge of the mat 17 seconds into OT to win, 6-4.

Eckenrode had to work hard in his 8-6 win over Central Cambria’s Ethan Kubat. Kubat scored the initial takedown, but Eckenrode led 6-5 after two periods and won by two points.

Moore came off of his back midway through his bout with Mount Union’s Clayton Arnold to pin Arnolds in 5:27 — the second-seeded Moore’s second pin of the day.

The most entertaining bout of the day came in the third round of consolations at 113, where Central’s Tyler Biesinger defeated Penn Cambria’s Alayna Gil, 13-11, in overtime.

Near the end of regulation, Biesinger and Gil, a girl, were involved in a flurry that drew the attention of much of the crowd.

When the buzzer sounded, the official and the mat judge conferred with the scorer’s table, with Penn Cambria coach Todd Niebauer and Central coach Dave Marko nearby, and ruled that the score was tied, 11-11, sending the bout into overtime.

Biesinger took Gil down in overtime to win.

“That girl is a good little wrestler,” Marko said. “People can say what they want. Somebody said ‘Marko talked his way into that one.’ It was the right call. She wrestled him tough.”

“Alayna wrestled well enough to win that match,” Niebauer said. “I thought there were some calls that could have gone our way but didn’t.”

The tournament resumes at 11 a.m. today with the fourth round of consolations. The championship finals, third and fifth-place bouts will all be wrestled at the same time, and are scheduled to start after the 5:30 p.m. Hall of Fame induction ceremony.

Complete results can be found on: https://arena.flowrestling.org/.