How do you top that?: Vikings have high expectations for D6 tournament 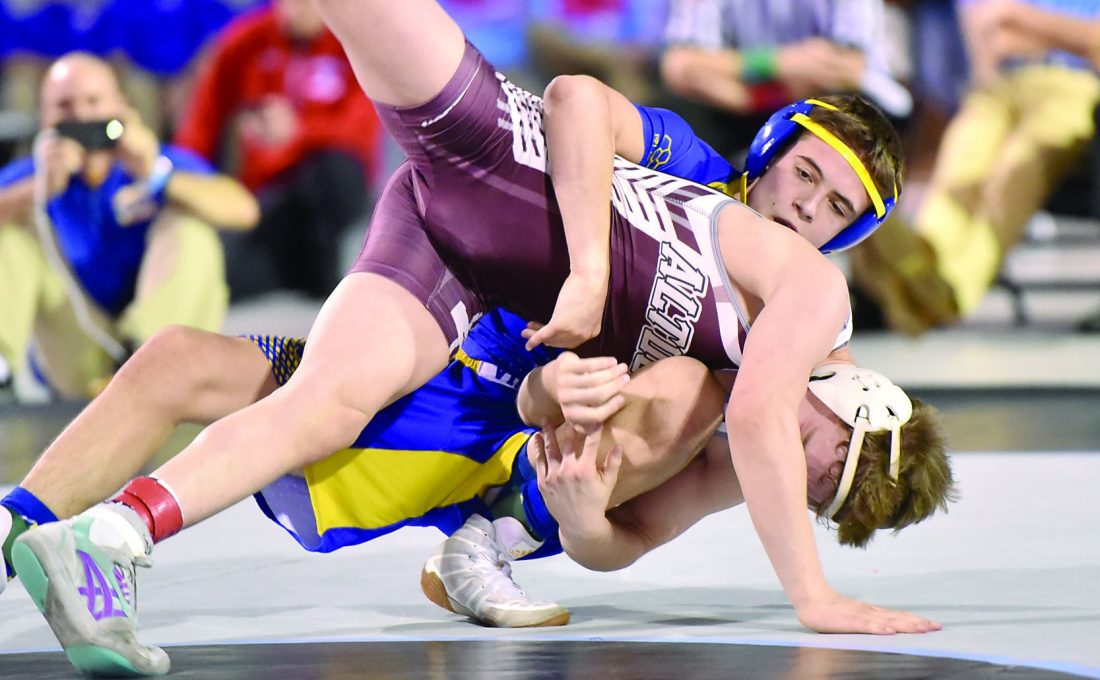 Mirror file photo Glendale’s Brock McMillen will compete at 132 pounds for the Vikings this weekend at the District 6 Class 2A Tournament.

Glendale had a District 6 Class 2A Tournament to remember last season as it crowned three champions for the first time in program history and qualified five wrestlers to the Southwest Regional Tournament.

Brock McMillen used the tournament as a launching pad to win the school’s first state title at 126. Teammates Suds Dubler and Cory Johnston also won district titles at 106 and 220, respectively.

Their success boosted the Vikings to a fifth-place finish in the team standings. How will junior 132-pounder McMillen and the rest of the Vikings follow up that success in this weekend’s District 6 Tournament?

“It seems like there are some big-time upsets and high seeds get knocked off. That can’t happen to us if we’re going to be in the team title hunt. If it does happen to us, we’ve got to be tough and headstrong and be able to wrestle back through the consolations.”

Dubler says his goal is to get a whopping eight wrestlers through to next week’s Southwest Regional Tournament.

“We think if we can get eight guys through, we’re going to be right there for title contention,” he said. “That would be a new record at Glendale. I think our previous record was five. We have eight seeded in the top six, so if we don’t get eight, we fell short of our seeds, and that’s never a good thing.”

The championship finals, third and fifth-place bouts will all be wrestled at the same time, and are scheduled to start after the 5:30 p.m. Hall of Fame induction ceremony.

The top six at every weight class advances to the regional tournament.

“Our guys are really looking forward to it,” Huntingdon coach Jon Mykut said. “It’s what you prepare, wrestle and practice for all year-long.”

There are three area No. 1 seeds in Tyrone’s Hunter Walk (113), McMillen and Huntingdon’s Myles Baney (182). Baney wrestled for much of the season at 170, but he has opted to move up for the postseason.

“He just felt it was the best option for him,” Mykut said. “He’s kind of been sucking down to 170 for the team all year. I think he has a good shot there. There are certainly some good kids in that weight class he’ll have to beat, but that’s what it’s all about. He’s excited just like everybody else is. He’s practiced hard and put the time in, and now it’s time to reap the rewards, so to speak.”

“He’s had a good season, and hopefully he’s on,” Billy Dubler said of his son. “He’s got to beat some good kids to get to the finals and hopefully he gets the opportunity to wrestle a returning state champ. We’ll see where he stands.”

“There’s no doubt that Rothrock was the number one seed,” P-O coach Brad Pataky said. “If Hunter gives his best effort and has a great attitude going into the tournament, I think he can walk away with the title.”

Many of the weight classes are very deep, which raises the interest of wrestlers, coaches and fans who are already stoked about the postseason starting.

“District 6 is a very, very tough district,” Mykut said. “You throw in Philipsburg and Bald Eagle Area. It was tough before those guys came down to double A. Now that they’re at Double A, it just makes it that much more difficult to get through. Some of those brackets are pretty stacked.”

“This is always the most exciting time of the year,” Pataky said. “We’re looking forward to watching our guys go out there and battle and give their best effort.”