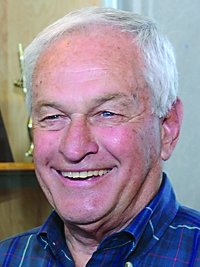 District 6 is expanding its scholarship program in the name of Dean Rossi.

At its meeting last month, the district voted unanimously to substantially bump its previous scholarships honoring the late athletic director at Hollidaysburg Area and Huntingdon Area high schools, respectively, from $2,000 to $20,000 annually.

Since Rossi died in October of 2015, District 6 invited nominations from its member schools, selected two males and two females that displayed “the highest levels of sportsmanship” and presented each with $500.

After discussion, District 6 decided to take additional revenue from online ticket sales to its football and basketball tournaments and supplement the scholarship fund.

Every member school (District 6 has 50) will now nominate a deserving male and female that fits the district’s criteria, and a total of 100 students will be awarded $200 each.

“The committee believes it is important to recognize and award students who represent the shared values of sportsmanship and serve as role models as student-athletes in our member schools,” Marshall said.

“The money is money we’d normally reimburse to the schools,” Hudak said, estimating it to be about $10,000 annually. “The rest is what we’ve had in our treasury. We want to promote sportsmanship. There’s a stigma out there how things are going downhill, and the negativity is trickling down to the high school level. We said, ‘Let’s flip that around and recognize positive sportsmanship.'”

“We both cried,” Judy Rossi said. “It’s amazing. Dean would be so humbled. I know he would, and I am, too. He had a wonderful relationship and a lot of friends on the District 6 committee, and he enjoyed being on the PIAA board, too.”

“Dean was a true friend of mine — a real mentor,” Hudak said. “I had a lot of respect for him because he was so in tune to the student-athletes. I’m proud that his name is attached to this.”

Judy Rossi said her husband started scholarships at Hollidaysburg and Huntingdon before he passed away.

“He was all about helping kids,” she said.

1. The student-athlete participated in at least one PIAA sanctioned sport within the last calendar year and will be a graduating member of the Class of 2020.

3. The selection does not necessarily need to be the best athlete but should be a student-athlete that has been coachable, a great teammate and always displays the ideals of sportsmanship in and out of the athletic arena.

4. Any student-athlete that has been ejected from a PIAA athletic contest is not eligible for the award.

Names should be submitted to via email at jrainey@homercenter.org no later than April 1.

Student-athletes will be recognized at the District 6 banquet on Thursday, April 16 at the Blair County Convention Center.