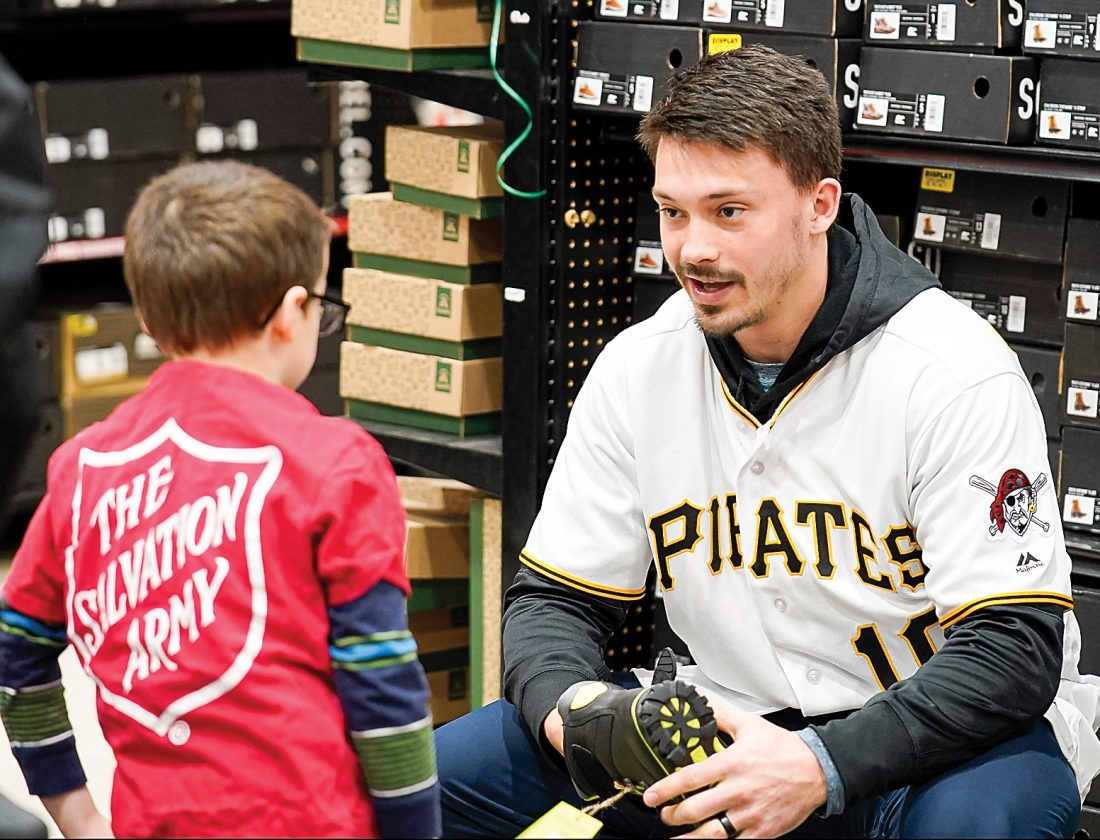 Photo for the Mirror by Chuck Meyers Outfielder Bryan Reynolds helps a young fan try on a pair of shoes during the Pirates Care-A-Van stop in Altoona.

After an outstanding rookie season following an April 20 call-up with the Pittsburgh Pirates, Reynolds enters the 2020 season as one of the most promising young outfielders in Major League Baseball.

What a difference a year makes, Reynolds had to be thinking Wednesday afternoon as he visited the Altoona Dick’s Sporting Goods Store in the Logan Town Centre as part of Pirates’ annual Care-A-Van that again benefited the Salvation Army’s Project Bundle-Up, which provides warm winter clothing for disadvantaged children.

“It was a wild ride,” Reynolds, who will turn 25 next Monday, said of his 2019 season with the Pirates. “Getting called up, not knowing how long I was going to be up there. Then I got to stay up for a long time. It all went pretty well. It was just a fun experience all around.”

A second-round draft pick by the San Francisco Giants in 2016, Reynolds came to the Pirates with reliever Kyle Crick in a January 2018 trade that sent outfielder Andrew McCutchen to the Giants. Moving the immensely popular McCutchen, a five-time National League all-star and the NL’s Most Valuable Player in 2013, drew the ire of the Pirates’ fan base, but Reynolds made the trade worthwhile for Pittsburgh last season.

With a .314 average, Reynolds finished tied for sixth in the National League batting race with Colorado’s Charlie Blackmon. Reynolds, a switch-hitter who can play any of the three outfield spots but played primarily in left field, also belted 16 home runs and drove in 68 runs in 134 games while finishing fourth in the National League Rookie of the Year balloting.

“I had a good group of guys around me in the other players, and (Pirates hitting coach Rick) Eckstein was great, helping me in the (batting) cages,” Reynolds, a Nashville, Tenn., native who played collegiate baseball at Vanderbilt University, said of his first season in Pittsburgh.

Reynolds was one of the few bright spots in an otherwise dismal season for the Pirates, who won only 25 of 73 games after the all-star break and finished in last place in the National League’s Central Division.

Reynolds realizes that changes are part of the game, even though the Pirates have made a bevy of drastic ones in their managerial realm since the end of last season.

“There are a lot of moving parts, people come and go, things change, but it’s just about adapting to those things and continuing to play the game,” Reynolds said.

Reynolds is confident that the Pirates have a decent nucleus in place. Shortstop Kevin Newman also had an outstanding rookie season in 2019, finishing eighth in the NL batting race with an average of .304, marking the first time that two Pirates rookies had batted over .300 in the same season since Manny Sanguillen and Richie Hebner did so in 1969.

First baseman Josh Bell, who was scheduled to appear in Johnstown Wednesday evening as part of the Care-A-Van, clouted 37 homers, drove in 116 runs, and was an all-star selection last year.

“We’ve got a good group of guys, a lot of talent,” Reynolds said. “We’ve just got to go out there and do it.”

The Pirates will again be challenged by a rugged National League Central Division in which the defending champion St. Louis Cardinals, returning playoff-qualifying Milwaukee Brewers, and Chicago Cubs all figure to be formidable again, and the fourth-place Cincinnati Reds should be vastly improved.

New Pirates’ bench coach Don Kelly, who saw Reynolds play as a scout in the Detroit Tigers organization and as a first base coach last year with the Houston Astros, is sold on the youngster’s talent.

“He’s a great outfielder,” Kelly said Wednesday. “I got to see him play when I was scouting, and I really liked the way he played. The talent he’s got is unbelievable. His bat control and the way he competes (is outstanding). He’s a big part of what we’re doing.”

Reynolds hopes that his encore season in the majors can be just as good as his inaugural one.

“I just want to go out there and do my best,” Reynolds said. “I think that if I do that, I’ll meet any goal that I have set. I couldn’t have asked for anything more (last year). It was definitely a dream come true.”