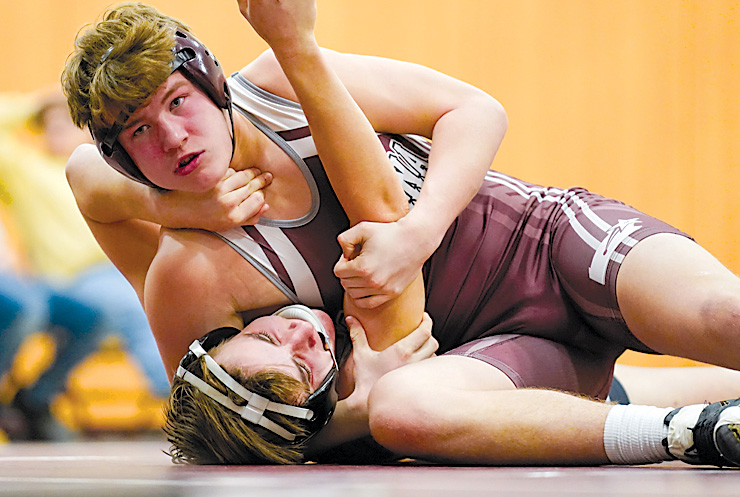 Photo for the Mirror by Chuck Meyers Altoona freshman Alex Yost gets the pin on Hollidaysburg’s Carter Schultz in the 170-pound match on Tuesday.

The Altoona Area High School wrestlers made their first home appearance of the season Tuesday and cruised past a depleted Hollidaysburg squad, 62-15, at the AAHS Fieldhouse.

“It was a nice crowd, a nice environment and we put a decent show on tonight,” Gilbert said.

“(Hollidaysburg) had some illnesses, some guys out,” Gilbert offered. “They wrestled over the weekend and it’s tough to come back after that, especially for a rivalry.”

Gilbert said he was a bit surprised the Tigers forfeited four bouts.

“I didn’t expect it,” he said, “but it happens sometime. It’s happened to us.”

Hollidaysburg highlights were falls by Nick Burkey (145) and Aaron Sleeth (160). The Golden Tigers also received a decision from Garidan Bridenbaugh (132).

“We got the injury bug over the weekend,” Hollidaysburg coach Christian Harr said. “We had four different guys out — one with the flu, one with a collarbone and one with an elbow. We also have one with a broken hand.

The Lions participate in the Clearfield duals Saturday before returning home to face DuBois (Jan. 20) and Huntingdon (Jan. 23).

“You can’t complain when you look at the effort,” Harr offered. “As far as experience, we don’t have much, but we do have heart and that’s what we focus on when we go out to compete.”