EVERETT — The annual meetings on the hardwood between the Tussey Mountain and Everett girls high school basketball teams are, more often than not, hard-fought battles with a lot on the line.

Thursday evening’s first matchup of the year between the Lady Titans and Lady Warriors had first place, and the upper hand in the chase for the Inter-County Conference South Division title, on the line.

In a contest, which had a playoff-type atmosphere, that involved two Tussey Mountain technical fouls and two TM fans being ejected from the building, it was the Lady Warriors who kept their composure at just the right time that allowed them to pull away late for a 55-40 victory at Everett Area High School.

“This game is always for the edge,” Everett coach Keith Moyer said. “We have a lot of respect for Tussey. They play hard, they’re physical, they make you earn every basket. I’m really proud of my kids.”

With the win, Everett improved to 8-5 overall and remained unbeaten in the ICC South with a 7-0 mark. Meanwhile, Tussey dropped to 11-3 and 7-1 in the conference.

Things started to unravel for the Lady Titans at the outset of the second half as Lady Warrior all-state player Kaitlyn Maxwell, who opened the contest with her team’s first six points, was assertive to open the third quarter.

Maxwell, who finished with a game-high 33 points and collected eight rebounds, sparked a 14-4 spurt with nine points that turned a three-point (22-19) Everett halftime lead into a 36-23 advantage when Gabby Bulger buried a 3-pointer at the 2:16 mark of the third.

“I think in the first half, she (Maxwell) did a good job of trying to get others involved. But, they (Tussey Mountain) weren’t guarding her,” Moyer said. “I told her she needed to step up and take over the game early (in the second half). She’s a great kid — she always listens, and we’re fortunate for that.”

The Lady TItans ended the quarter with three points from Lexi Weimert, who tallied a team-high 13, and two free throws from Sophie Brumbaugh, who had eight boards, to make the score 36-28.

After Maxwell hit the first of two free throws at the start of the fourth, Alayna Clark hit a jumper that cut the Tussey Mountain deficit to 37-30 at the 7:12 mark.

One minute later, the momentum the Lady Titans seemed to begin to seize was gone as assistant coach Ted Weimert was hit with a technical. In the same sequence, the two fans were shown their way out the door before Maxwell went to the line and made one of the two free throws.

“Here’s my comment,” Tussey Mountain coach Todd Gates said. “This is my 14th year of coaching, and in 14 years, me or one of my players have never had a technical, and we had two in this game. So, that kind of sums it up right there. That’s my comment. That’s all I’m going to say.”

With the Lady Warriors getting the ball back, Bulger, who delivered 12 points, made it hurt a little more as she drilled another 3-pointer that was followed by a Kristen Ewing bucket that quickly turned the Everett seven-point lead into a 13-point (43-30) edge in less than a minute.

Tussey Mountain’s Meghan Molosky and Brumbaugh both went 1-of-2 from the foul line before Maxwell hit 4-of-4 and Bulger went 2-for-4 to increase the lead to 49-34.

“They had to foul. They were behind — it was a good strategy on their part,” Moyer said. “If we don’t make free throws at the end, then it’s a close game. If we do, we extend our lead. Tonight, we extended our lead.”

The second technical was called with 1:46 left in the game when Bulger ended up on the ground and Kailee Leonard was tagged, which was also her fifth foul of the game to end her night. Maxwell made both technical shots and then canned two more in the bonus.

Annie Nave finished with a game-high 12 rebounds and five blocks for Everett, which won the rebounding battle at 33-22.

The two teams will play the rematch at Tussey Mountain on Thursday, Feb. 6. 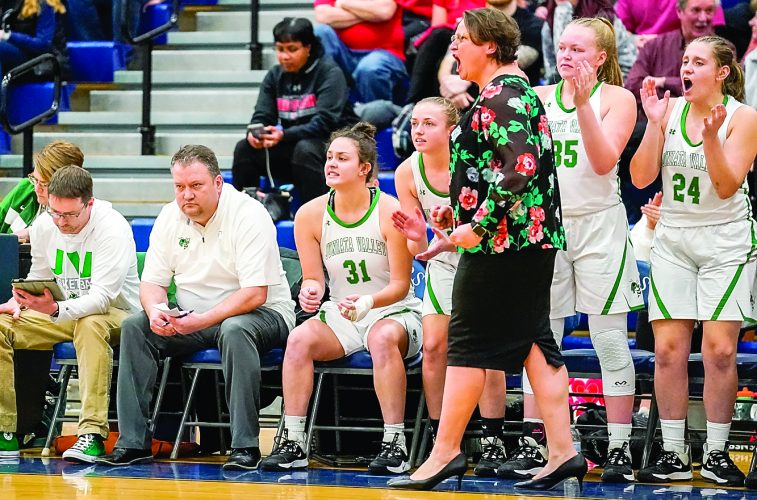