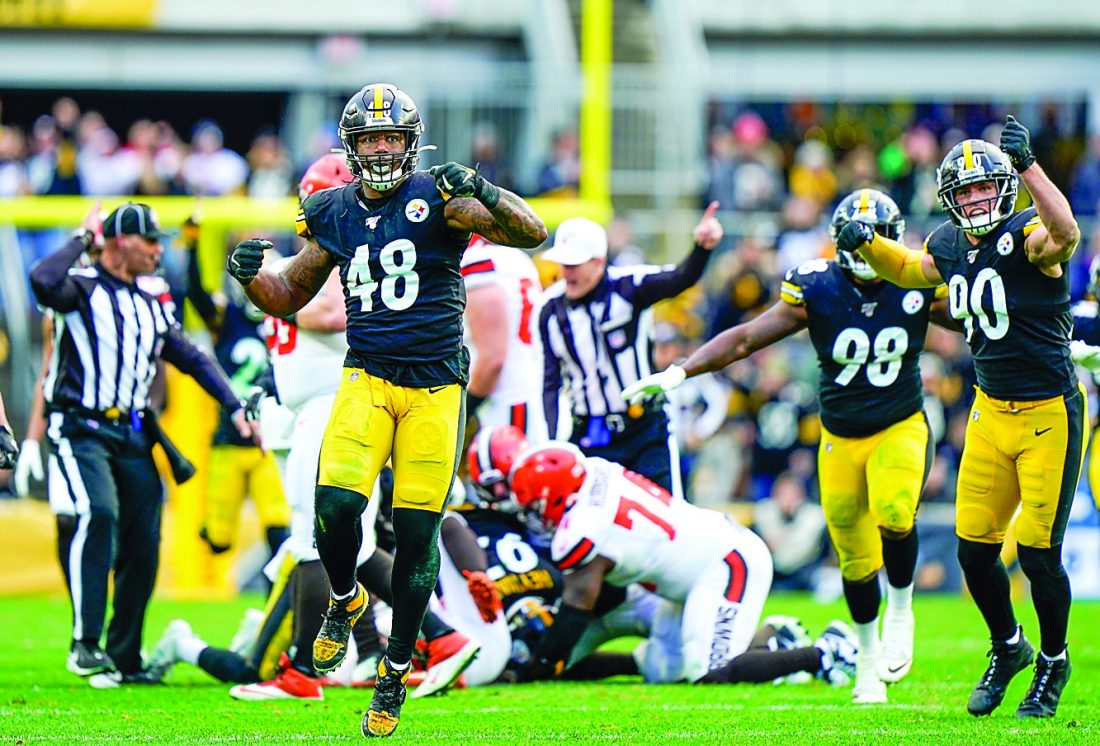 Bud Dupree reacts to the crowd after forcing a fumble on a sack of Baker Mayfield. Photo for the Mirror by Chuck Meyers

The National Football League has moved the Steelers Dec. 15 home game with Buffalo from 1 p.m. to 8:20 p.m. that night, as part of the league’s flex scheduling process. The Vikings were to play the Chargers in Los Angeles that night. That game will be moved to the afternoon.

The following are the highlights and lowlights from the Steelers’ 20-13 victory over the Cleveland Browns on Sunday at Heinz Field in Pittsburgh:

Play of the game: With the Browns at their own 40-yard line with 1:17 remaining in the game, Pittsburgh cornerback Joe Haden made a diving interception of a Baker Mayfield pass at the Pittsburgh 38. The Steelers then ran out the clock to earn the victory.

Offensive player of the game: Pittsburgh quarterback Devlin Hodges completed 14-of-21 passes for 212 yards with one interception and one touchdown.

Defensive player of the game: Steelers linebacker Bud Dupree had six tackles, including 1.5 sacks, forced a fumble and had a pass defensed.

Most telling statistic: The Steelers had five sacks to the Browns’ one.

Hidden statistic: The Steelers averaged 9.0 yards per pass play to the Browns’ 4.4.

Best run: Pittsburgh rookie Benny Snell powered his way for 14 yards, dragging several Browns, at the start of a drive late in the third quarter.

Best pass: Hodges lofted a beauty to James Washington — with Denzel Ward draped over him — for 44 yards early in the third quarter to set up the go-ahead touchdown.

Worst pass: Hodges overthrew Diontae Johnson in the fourth quarter, and Terrance Mitchell intercepted the ball and returned it to the Pittsburgh 30-yard line. Fortunately for the Steelers, the Browns couldn’t move the ball and ended up punting.

Best catch: Washington had several highlight-reel snags. The best was his 30-yard touchdown catch in the second quarter in which he was interfered with by T.J. Carrie and maintained possession of the ball despite bobbling it as he fell to the ground.

Dropped pass: The ball popped out of Cleveland tight end Demetrius Harris’ hands as he fell to the ground in the end zone in the fourth quarter.

Best block: Cleveland center JC Tretter and guard Wyatt Teller opened up a huge hole for Nick Chubb to gain 12 yards up the middle in the second quarter.

Best hit: Dupree stripped the ball from Mayfield, and Cam Heyward recovered, in the third quarter.

Missed tackle: Browns cornerback Greedy Williams was run over by Pittsburgh’s Jaylen Samuels on an 8-yard run in the third quarter.

Best kick: Pittsburgh’s Chris Boswell’s kickoff late in the second quarter went to the 5-yard line and was near the sideline. The Browns were forced to start from their own 7.

Worst kick: The Steelers’ Jordan Berry punted one into the end zone from his own 47 with 1:52 left in the game.

Best coverage: Pittsburgh’s Mike Hilton knocked away a pass to Jarvis Landry inside the Pittsburgh 5-yard line midway through the fourth quarter.

Worst coverage: It appeared as though Steelers linebacker Devin Bush left Harris go alone down the middle of the field for a 23-yard reception in the fourth quarter to the Pittsburgh 14-yard line.

Costliest penalty: Ward interfered with Pittsburgh’s Deon Cain in the end zone on third down in the third quarter, and Snell scored the go-ahead touchdown on the next play.

Best call: The Steelers mixed in a few wildcat plays that proved to be successful.

Best effort: Washington came up big with a few great catches — with JuJu Smith-Schuster inactive — to help settle down Hodges.

Unsung hero: Steelers nose tackle Javon Hargrave had six tackles, including a sack, and was a force in the second half.