Tigers defeated in a flash 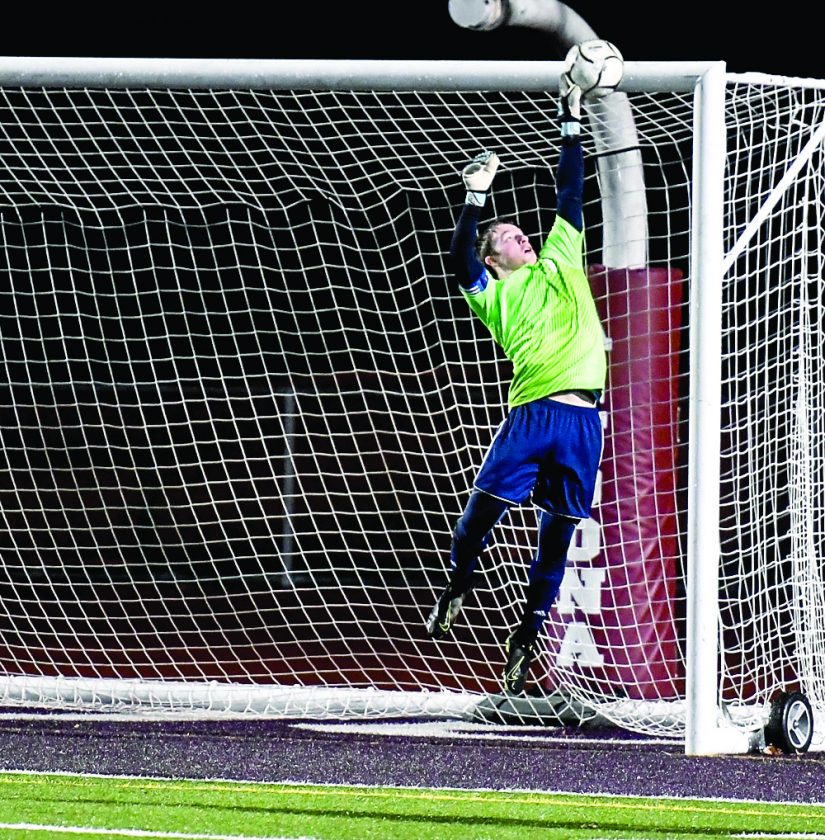 Photo for the Mirror by Tim O’Brien Hollidaysburg goalie Evan Shale makes a save for the Golden Tigers.

The West Allegheny Indians came out fast and aggressive against Hollidaysburg in the first round of the PIAA 3A state playoffs and looked like they might run the Golden Tigers out of the stadium.

Hollidaysburg survived the initial onslaught unscathed and answered with three straight goals, putting its opponent in a big, early hole.

The District 6 champs couldn’t hold off the hard-charging Indians, though.

West Allegheny tied the game with three straight goals in a four-minute span late in the first half and added two more in the second half for a 5-3 win Tuesday at Mansion Park.

“It was a continuous attack. I’ve never seen a team with speed like that.” Hollidaysburg coach Craig Shale said. “They were state champs last year. They lost a bunch of seniors, and they’re just as good again this year. We just couldn’t keep up. They weren’t just fast going forward. They were fast defensively too. They close you down so quick.”

Hollidaysburg didn’t get its first shot until the 11th minute when Braden Callahan shot on goal deflected off the keepers hands up over the crossbar for a corner kick.

The Tigers took full advantage of the set play when Jesse Clayton got a foot on the Jacob Roach kick and put it in the net for a 1-0 lead.

Ethan Pinter doubled the Hollidaysburg advantage five minutes later, scoring on a ball that bounced out to him in the box.

The Tigers then caught a major break when West A keeper Trevor Day missed played Andrew Wolford’s clearance kick from the Hollidaysburg end of the field. The ball bounced over Day’s head and went in, giving the Tigers their third goal on just four shots.

“It was as big a shock to us as it was to them. They were controlling the game,” Shale said. “Even at 3-0 though, you couldn’t be comfortable.”

The Indians got on the board in the 28th minute when Hollidaysburg was called for pulling down Keegan Amos in the box for a penalty kick. Caleb Miller put the kick in the lower right corner to make it a 3-1 game.

After Fletcher Amos got the Indians one goal closer, West A got the equalizer on Miller’s free kick from just outside the box.

“We didn’t come out here and play like we should. We settled down and got some goals,” West A coach Kevin Amos said. “We were kind of hoping to get one by halftime. Coming in tied at the half was really big for us.”

The game remained tied until midway through the second half when Connor Blazer one-timed a ball out of the air that several players were battling for in front of the net.

Miller sealed the win with his third goal of the game on another penalty kick with 6:14 left to play.

“Three of their goals came on two penalties and a free kick,” Shale said. “I thought both penalties were soft. I didn’t see anything on the first one and the second one looked like the guy was going out of bounds. That’s no excuse though. We were outplayed. It’s a tough way for my seniors to go out.”

Evan Shale kept the Tigers in the game from the very start making a pair of tough saves in the opening minutes. Under constant pressure all night, the junior keeper made 18 saves.

The WPIAL runner-up outshot Hollidaysburg 38-5 and had eight corner kicks to just two for the Tigers.

West A moves on to play Lower Dauphin the quarterfinals. Hollidaysburg’s season ends at 14-5-1.

It was the final high school game for the seven seniors on the team.

“This was one of the best seasons I’ve ever had,” senior defender Isaac Helsel said. “I got to spend it with six of my best friends. It’s sad that it had to come to an end, but we’ve got a lot more good things ahead of us.”