The end of the road: Lady Tigers come up short in state opener 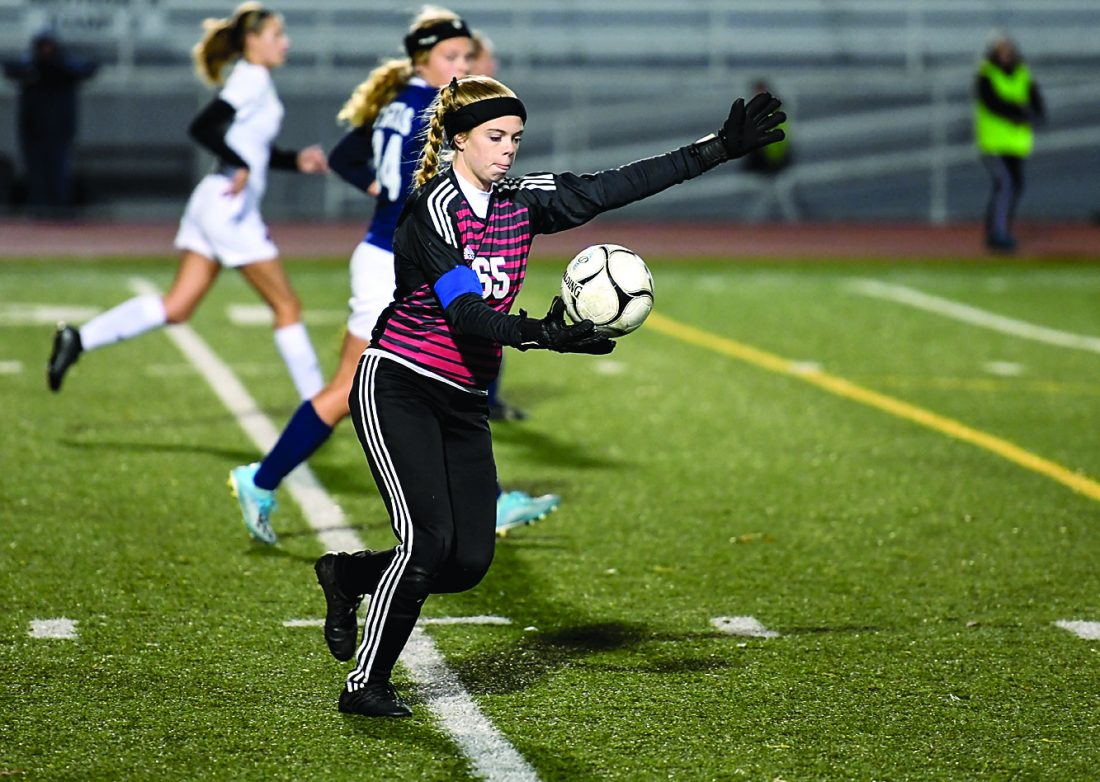 Photo for the Mirror by Tim O’Brien Hollidaysburg keeper Meghan Cutshall clears the ball for the Lady Tigers.

The Hollidaysburg girls huddled in a circle around coach Dave Soellner and the rest of the staff under the dimly-lit visitor bleachers at Mansion Park. There were tears, and speeches, and well-wishes for the future.

Such was the case after the Lady Tigers lost the last game of the year, a 2-1 defeat to WPIAL third-place finisher West Allegheny in the first round of the PIAA Class 3A tournament Tuesday night.

Even so, Hollidaysburg fought from first to last whistle, playing the majority of the game in either a scoreless or 1-1 tie. Both teams played scoreless to halftime, and Mackenzie Evers broke the tie for the Lady Indians just over a minute into the second half.

Emma John knotted it back up 65 seconds later with an assist from Alyssa Bell, and it remained tied until Evers booted the ball in again for her second goal of the game at 21:59 to play.

“I think in this game we played really strong,” Soellner said of his team and its resolve after giving up the first goal. “I just think a couple of mistakes hurt us there. They easily could have quit playing when they got down one, but they came back and tied it right away.”

“I’m not sure if we got tired, or things weren’t going our way, but we never quit,” Soellner said. We kept fighting.”

The Lady Tigers played tough defense early on in the contest, and Bell had a chance at a Hollidaysburg goal that was turned away by Lady Indians keeper Kayla Howard.

“I think the whole team totally, defensively, played well,” Soellner said. “We held our marks, we weren’t letting them turn and run on us. We were making sure we were keeping the ball in front of us, and I kept telling them that this is basically the second season. You’ve made it to the state round, and basically you only need one or two goals. We don’t need a ton of goals, we need to try to keep them off of it.”

The Lady Tigers end the season with a record of 13-7 after claiming their fourth District 6 title in four seasons. With the team only losing three starters and almost a dozen seniors off this year’s roster, the future looks bright according to Soellner.

“We have a lot of returning young ladies. We’re losing 10 seniors total, three starters. They’re a tough senior class, and you hate to lose any of them, especially the three starters, but the other group of seniors have helped us tremendously, more than what they realize,” Soellner said.

“Moving forward, we have a great group of kids coming back, and our junior high program has been pretty successful so hopefully we’re going to get some kids off of that for next year’s freshmen,” Soellner said. “So I think the future does look bright.”

West Allegheny (15-2), on the other hand, will see its magical run to the state playoffs continue.

Lady Indians coach Dave Tissue pointed to the increased involvement of midfielder Morgan Shanskey in the second half that helped the offense open up.

“In the second half, she got involved, and we started putting the ball on the ground, possessing the ball, and you could see we pretty much played in that end the whole half,” he said.

The Lady Indians crowded onto the pitch for a team hug after a win it their first-ever state playoff victory.

“It’s pretty awesome, can’t you tell?” Tissue said, gesturing to his boisterous group. “Last year was the first year we ever made the playoffs, and that’s basically a sophomore and junior team.”

West Allegheny will face off against WPIAL champion Mars in the quarterfinals on Saturday. Mars was a 6-1 winner Tuesday night against District 10 champion Warren.

First half: no scoring.

CLAYSBURG — If anyone had left the Inter-County Conference girls championship game at halftime, they might have ...

BELLEFONTE — Gracie Weaver finished first in all events and won the all-around for Altoona, which won the Central ...