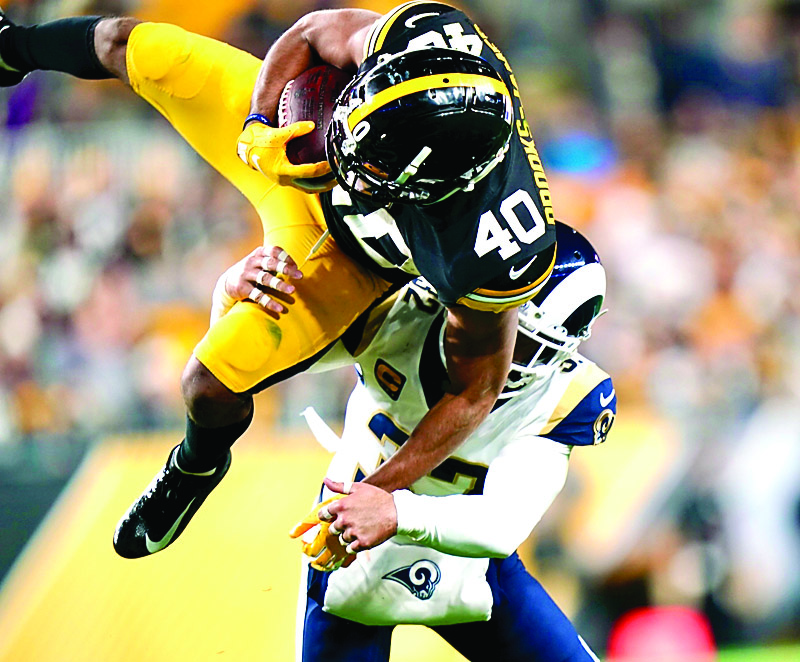 Photo for the Mirror by Chuck Meyers Steelers running back Tony Brooks-James goes airborne with the Rams’ Eric Weddle in pursuit.

The following are the highlights and lowlights from the Steelers’ 17-12 victory over the Los Angeles Rams on Sunday at Heinz Field in Pittsburgh:

Play of the game: Facing a fourth-and-10 at the Steelers’ 30-yard line with 1:30 left in the game and trailing 17-12, Rams quarterback Jared Goff threw incomplete to Josh Reynolds in the end zone. Pittsburgh’s Joe Haden and Terrell Edmunds defended the play, and it was questionable on whether Edmunds interfered with Reynolds, but nothing was called.

Offensive player of the game: Steelers receiver James Washington caught six passes for 90 yards and the only offensive touchdown of the game.

Defensive player of the game: With all due respect to Steelers safety Minkah Fitzpatrick and Rams defensive lineman Aaron Donald, Pittsburgh cornerback Joe Haden had seven tackles, an interception and a forced fumble.

Most telling statistic: The Rams were 1-for-16 on third and fourth down.

Hidden statistic: The Steelers ate up eight minutes of the fourth quarter with a 14-play, 60-yard drive that resulted in a field goal.

Best run: The Steelers’ Tony Brooks-James leaped over center Maurkice Pouncey on an 8-yard run in the third quarter.

Worst pass: Goff tried to hit tight end Tyler Higbee down the sideline in the third quarter and was picked off by Haden.

Best catch: Washington went up over Troy Hill to haul in a toe-tapping 3-yard touchdown catch in the first quarter.

Dropped pass: Steelers tight end Vance McDonald cost the Steelers a chance at a field goal in the third quarter by not securing a third-and-20 pass from Rudolph.

Missed block: DeCastro didn’t slow up Donald, who knocked down Rudolph in the end zone for a safety in the fourth quarter.

Best tackle: Pittsburgh cornerback Steven Nelson hung on to Rams tight end Gerald Everett and brought him down for a 4-yard gain on third-and-8 in the fourth quarter.

Best hit: Steelers nose tackle Javon Hargrave crashed into Goff in the second quarter, causing him to fumble, which Fitzpatrick recovered and returned for a touchdown.

Missed tackle: Hill went to the ground when Steelers receiver Diontae Johnson faked him out after a short catch that went for 13 yards on third-and-5 in the second quarter.

Worst kick: The Rams’ Johnny Hekker had a 24-yard punt in the second quarter.

Worst snap: Pouncey helped give the Rams a touchdown in the first quarter with a high snap that the Rams’ Dante Fowler scooped up and returned for a touchdown.

Best coverage: Haden had a beautiful diving knockaway on a pass to Cooper Kupp in the fourth quarter. Kupp finished with no catches.

Costliest penalty: A holding call on Rams tackle David Edwards wiped out a 20-yard pass from Goff to Robert Woods that would have given kicker Greg Zuerlein a better opportunity right before halftime. Instead, Zuerlein missed a 56-yard attempt into the open end of Heinz Field.

Best call: Facing a fourth-and-1 at their own 34 with 8:55 left in the game, the Steelers had Rudolph roll out and hit Trey Edmunds for 6 yards.

Worst call: The Rams had punter Hekker attempt a pass on fourth-and-1 from their own 29 midway through the third quarter. Pittsburgh’s Vince Williams hit Hekker as he was throwing the ball, and Terrell Edmunds intercepted it.

Best effort: Fitzpatrick has been a turnover machine for the Steelers’ defense. In addition to the touchdown, he also ended the game with an interception off a Haden tipped pass.

Unsung heroes: The Steelers threw Chukwuma Okorafor into the right tackle spot, vacated by Matt Feiler, who shifted to left guard to replace the injured Ramon Foster. The Steelers’ O-line held up pretty well against Donald, Clay Matthews and Co.

SFU football still set to play LORETTO — The Northeast Conference announced on Thursday a delay for the return ...

Aidan Steinbugl went 3-for-3, scored a run and drove in another, and Austin Hammerle allowed just four hits and no ...

Ex-CC star feels fortunate for another shot on links