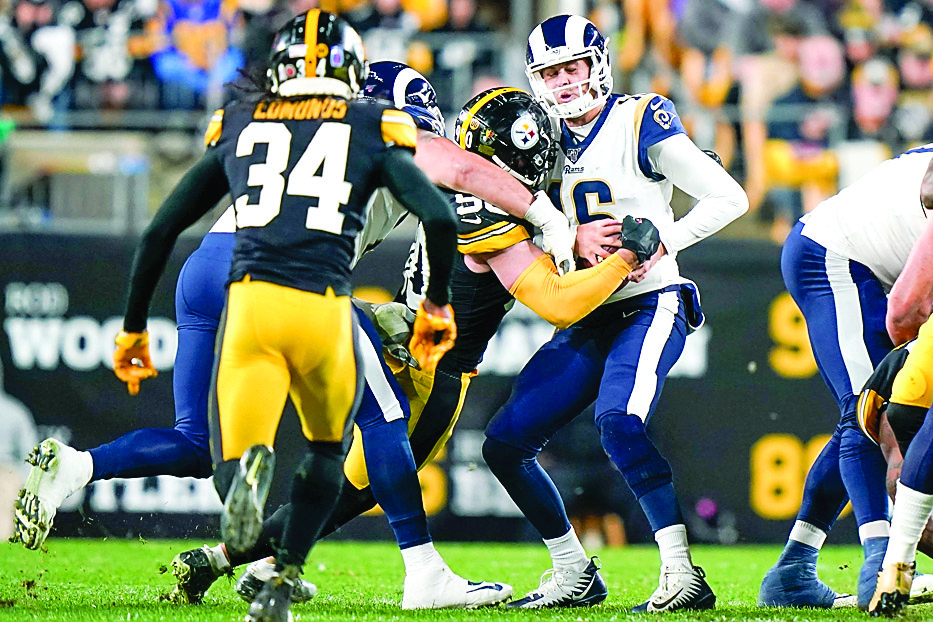 The Steelers' TJ Watt gets to Jared Goff of the Rams for the sack. Photo for the Mirror by Chuck Meyers

PITTSBURGH — The ball fluttered into the air and hung there for a split second. When it came back down to earth, it landed where it always seems to these days for the Pittsburgh Steelers: the seemingly omnipresent arms of safety Minkah Fitzpatrick.

Pittsburgh’s decision to send a 2020 first-round draft pick to Miami in mid-September in exchange for Fitzpatrick just hours after losing quarterback Ben Roethlisberger for the season in mid-September seemed gutsy at best and borderline reckless at worst. What if the Steelers struggled without their franchise cornerstone? What if the bottom fell out and the draft capital they needed to find Roethlisberger’s successor belonged to the Dolphins instead?

They’re not asking those questions anymore. Not with the Steelers suddenly rolling and their do-everything free safety in the middle of it all.

Fitzpatrick returned a fumble 43 yards for a touchdown in the second quarter and added a game-sealing pick in the final seconds to close out a brutish 17-12 victory over the Los Angeles Rams on Sunday, spoiling Rams defensive tackle Aaron Donald’s homecoming in the process.

“Minkah’s making all the plays,” said Steelers cornerback Joe Haden, whose second interception of the season was among Pittsburgh’s four takeaways. “Big plays. Impact plays. There’s nothing else you can say. You watch the tape and see his impact is special.”

Fitzpatrick pounced on a Jared Goff fumble and sprinted to the end zone to give the Steelers a 14-7 lead, his second touchdown in as many games following a tide-turning pick six against Indianapolis last week. His clinching interception after Goff pass intended for Robert Woods was swatted away by Haden gave Fitzpatrick six takeaways — five picks and one fumble recoveries — in seven games with the Steelers (5-4).

The Steelers have needed nearly every one during a four-game winning streak that has helped them emerge from a 1-4 start. Pittsburgh has done it despite an offense that remains very much a work in progress. The Steelers again struggled to move the ball against Los Angeles, managing just 273 yards while playing without starting running backs James Conner and Benny Snell Jr.

Thirteen penalties and a handful of drops didn’t help. Yet Pittsburgh remains in the mix in the AFC anyway thanks to Rudolph’s ability to avoid major mistakes and a defense that has regained its swagger following Fitzpatrick’s arrival. Rudolph finished 22 of 38 for 242 yards with a touchdown and an interception. His 3-yard lob to James Washington in the first quarter made him the ninth quarterback since the 1970 merger to throw a touchdown pass in each of his first seven games.

Yet Rudolph knows the defense — which already has 26 takeaways this season after managing just 15 all of last year — could use a little help.

“They’re playing like the ’85 Bears,” Rudolph said. “They are forcing turnovers every other series it seems like. We understand it’s a team game. We’re getting there. Today was a big step.”

The Steelers shuffled their offensive line during the week in hopes of slowing down Donald, a Pittsburgh native and a two-time NFL Defensive Player of the Year. For a while, it worked. Then Donald crashed into Rudolph in the end zone for a safety early in the fourth quarter that drew the Rams within 14-12. He finished with five tackles, a half sack and two tackles for loss in his first appearance in his hometown since the Rams took him in the 2014 draft. It just wasn’t enough to keep the defending NFC champions from falling further off the pace behind front-running San Francisco and Seattle in the NFC West.

Goff finished 22 of 41 for 243 yards with two interceptions. Pittsburgh held Rams receiver Cooper Kupp without a catch for just the second time in his three-year career. Two weeks removed from a 220-yard performance against Cincinnati, Kupp was targeted four times and failed to come down with the ball even once. Running back Todd Gurley ran for 73 yards on 12 carries but the Rams couldn’t find a way to get him involved regularly. He sat out the first two series of the fourth quarter. Los Angeles converted just 1 of 14 third downs, its lone touchdown coming on a 26-yard scoop and score by linebacker Dante Fowler on the second snap of the game.

“We didn’t really allow ourselves to get into a rhythm,” Rams coach Sean McVay said. “There was really no flow. We didn’t convert any of the third downs, so myself, everybody really wasn’t good enough today.”

Rams: Center Brian Allen left in the first quarter with a knee issue and did not return. DB Darious Williams left with an ankle problem.

Steelers: Wide receiver Ryan Switzer left in the fourth quarter with a back injury.

Steelers: Travel to Cleveland to play the Browns (3-6) on Thursday. Pittsburgh is 7-0-1 in its past eight meetings with Cleveland.