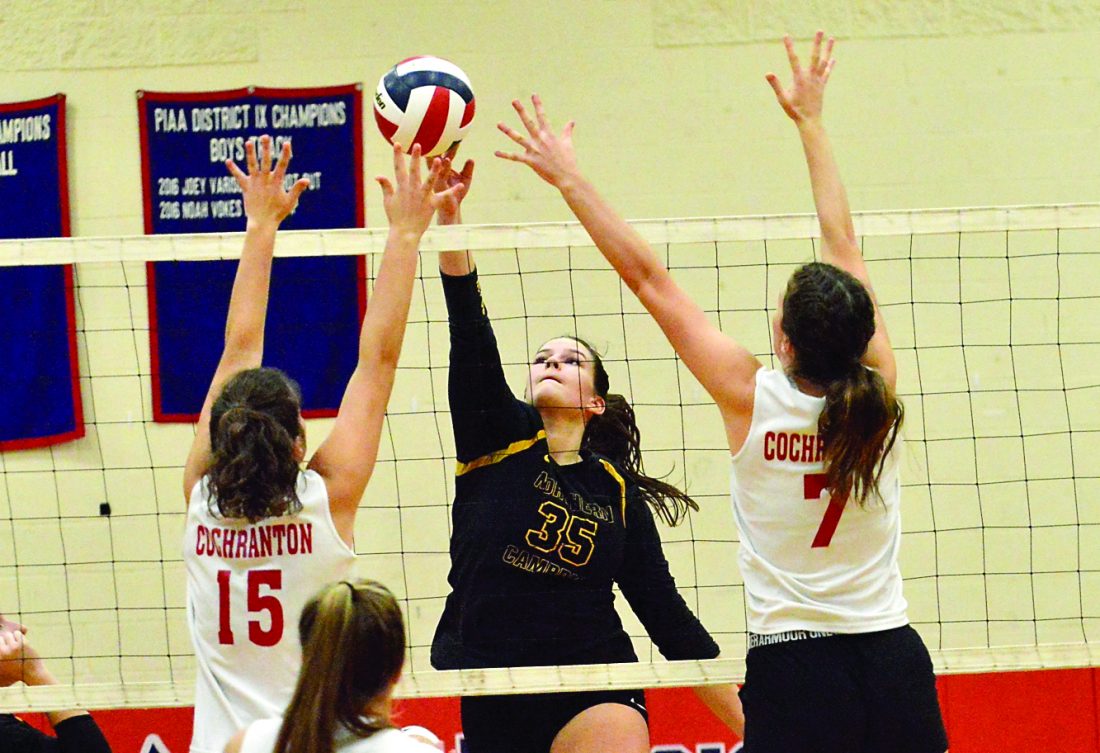 Photo for the Mirror by Calem Illig Northern Cambria’s Emma Kollar tries to place the ball between two Cochranton defenders.

DuBOIS — The gym at DuBois Central Catholic High School was filled with a sea of black and yellow on Saturday afternoon as Northern Cambria took on District 10 champ Cochranton in the quarterfinals of the PIAA Class 1A Volleyball Championships.

“This gym was full of energy,” said Northern Cambria outside hitter Maggie Hogan. “When we walked in here when no one was here and it was dead silent. We played music and then our fans came it really was awesome.”

The Lady Colts spent much of the match on the offensive, pulling Cochranton out of system several times.

Hogan had a key four-point service run during the first set. She finished the game with 13 service points and three aces.

Northern Cambria also took advantage of several unforced errors by the Lady Cardinals, who had six hitting errors and two service errors in the set.

Northern Cambria won the first set 25-17 before taking the second set 25-18. Hogan had five kills in that set alone, finishing with 16. Emma Kollar added two in the second, tallying five total on the night.

“Maggie has to have a lot (of the attempts),” Coach Hogan said. “Our offense runs through her. She did a good job. I thought Emma Kollar and Jenna Lutch had some good production. I thought Autumn Donatelli had good production on the outside. That really enabled us to get going.”

Cochranton finally found some momentum in the third game, pulling out to a 13-7 lead. The Lady Colts had seven unforced errors in the set, allowing the Lady Cardinals to take the 25-19 victory.

“Being able to defend two left-handers on the court at the same time can be quite a challenge and we were able to adapt to that,” Hogan said of two of the Lady Cardinals best hitters. “They surprised with a couple of things, but then we got rolling. It was an exciting match. They are a good team.”

But Northern Cambria didn’t stay down long, jumping out to an 18-7 lead before going on to take the set and the match 25-14.

“My dad always says to play longer,” said Maggie Hogan. “And Cochranton did make us play longer. We had a lot of long volleys and it was an exciting match.”

Dumm and Hogan combined for 39 assists.

Northern Cambria improved to 29-1-2. The Lady Colts play District 9 Clarion on Tuesday in the semifinals.