Despite finish, game ‘special’ for Rhodes 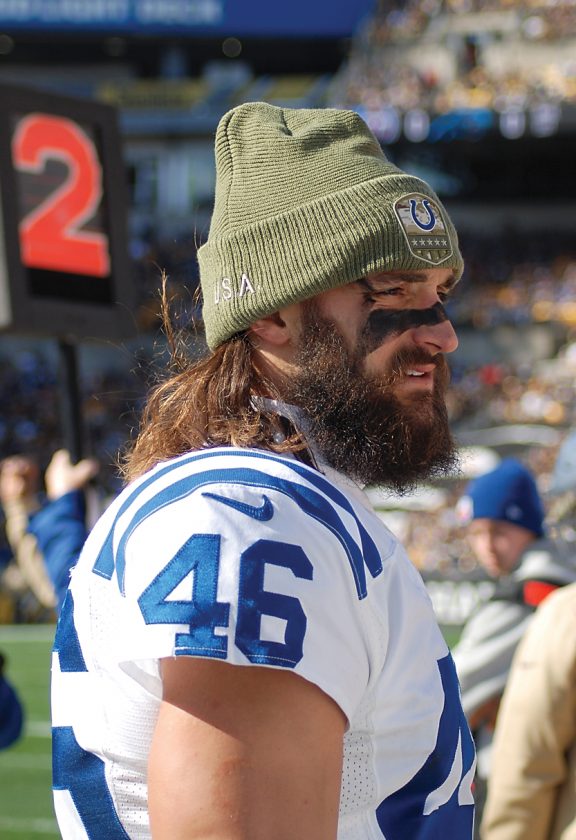 Photo for the Mirror by Chris Hochrein Hollidaysburg graduate and Colts long snapper Luke Rhodes watches from the sideline Sunday.

With the game on the line against the Pittsburgh Steelers, Rhodes — a Hollidaysburg product — lined up to snap the ball to placeholder Rigoberto Sanchez for a 43-yard field goal attempt.

Sanchez pointed the laces in the wrong direction on the exchange, however, and placekicker Adam Vinatieri’s kick sailed wide left as the Steelers snuck away with a 26-24 victory.

While his homecoming was spoiled on a heartbreaking play, Rhodes said after the game that it was a special experience to play in front of his most loyal supporters.

“It’s always exciting playing any game, let alone the crowd that’s watched you growing up,” Rhodes said. “Being able to play in front of all my family and friends was pretty special.”

Rhodes, 26, was a 2011 graduate of Hollidaysburg High School where he excelled at both linebacker and long snapper.

Sunday was the first regular season game he played at Heinz Field, and more than 70 friends and family were in attendance.

“My mom bought a bunch of tickets and sold them off to family,” Rhodes said. “I think it was a pretty big crowd. I haven’t seen them yet, but I know they were out there.”

Following his collegiate career at William & Mary, the 6-foot-2, 238-pound undrafted free agent signed as a linebacker with the Colts in 2016 to try and make his mark on special teams.

He was dressed for four games during his rookie year as a guard on special teams, but the following season, he earned the gig at long snapper after beating out rookie Thomas Hennessy.

“I put more actual time and effort and realized that I could actually do it,” Rhodes said of learning to be a long snapper. “I was athletic, could block, run and still tackle. I knew could be effective on special teams. I battled it out with (Hennessy) my rookie year, and (Indianapolis) decided to put some faith and trust in me.

“It’s been a fun and interesting and challenging process,” Rhodes said. “But that’s what football is. It’s an opportunity to find a way to stick around and find a talent you might not have known you had. You just have to put some effort into it.”

For his efforts over the course of the past two seasons, Rhodes was locked up by the Colts this past June with a four-year extension that made him the highest-paid long snapper in the NFL.

The terms of the deal were not disclosed at the time, but the NFL Network reported the deal was for $4.25 million with $1.25 million guaranteed on a deal that keeps him a Colt through 2023.

Sanchez said that Rhodes has played a critical role for the Colts over the past three seasons.

“We started working together my rookie year, and he really adapted to the position,” Sanchez said. “He’s worked his butt off to get to where he’s at. He deserves every penny that he’s getting paid.”

While it may not have been evident Sunday, the Colts have excelled over the past few seasons on special teams.

The trio of Rhodes, Sanchez and Vinatieri have gone 63-of-76 in field goal tries over the past three seasons working together.

All three insisted the missed field goal at the end of the game was not indicative of their recent play together.

“I just missed it,” Vinatieri said. “I have to do better than that. Just pulled it left.”

Rhodes said he is hoping that success continues.

“I love the Colts organization,” Rhodes said. “They’ve shown me nothing but the most positive attitude. They’ve done an amazing job helping me learn this new position and try to develop with what I’m doing. The city of Indy has been really great, and the community is fantastic. I’m really happy where I am.”

Another team that has put up a good showing this season is Hollidaysburg, who is set to face Oil City this Friday in the District 6 Class 5A finals.

Rhodes granted well wishes to his former Golden Tigers and advised that he will be keeping tabs on his hometown team.

“Anytime you can make it into the playoffs where we play in Central Pennsylvania football, it’s special,” Rhodes said. “Take advantage of every opportunity. I still remember playing high school football, and those are memories I’ll never forget. I remember playoff games and district championship games. They’re special. Just keep working and keep going after it.”