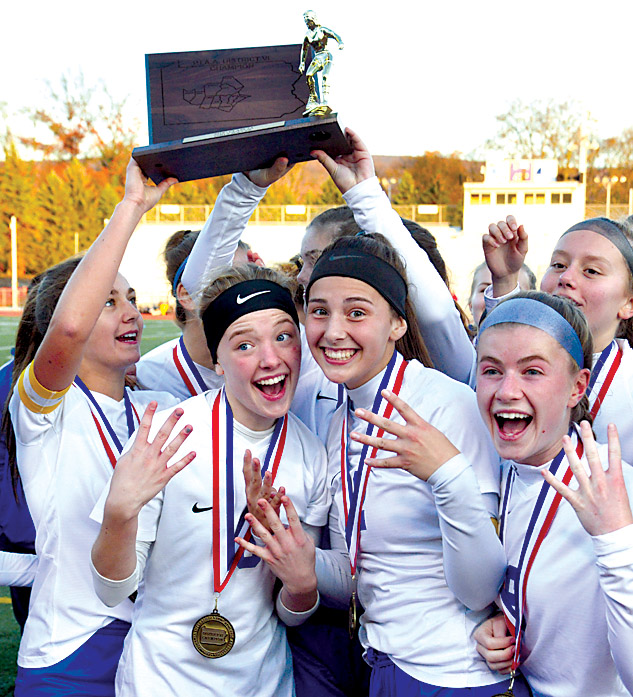 Winning a district title once is an accomplishment by itself, but to do it four years in a row is extraordinary.

That’s exactly what the No. 2 seed Bedford girls soccer team has done after shutting out top seed Bald Eagle Area, 3-0, in the District 5-6 Class 2A championship on Saturday at Mansion Park.

“It always feels good to win another district title,” Bedford coach Jeff Thomas said. “These girls have worked hard for it, too. Losing three key seniors last year, we had to figure out a way to replace them. There were a lot of goals scored by those three that we lost last year.”

The Lady Bisons got a couple of goals in the first 15 minutes from sophomore Katelyn Shaffer, first on a breakaway opportunity, the second off a corner kick on an assist from classmate Sydney Taracatac for the 2-0 halftime lead.

“Bedford’s a good team,” BEA coach Jared Moore said. “We got away from the game plan today a little bit. I don’t know if it was nerves, but don’t take anything away from them, they were excellent today, moved the ball well.”

The Lady Eagles spent virtually the entire game in their end of the field but did get a prime scoring opportunity from Zoey McHenry around the 34th minute, but it was ultimately denied by Lady Bison goalkeeper Lindsay Mowry.

“That’s the whole plan of playing possession soccer,” Thomas said. “Less turnovers, ball on the other end unless there’s a breakaway, scoring chances for the others cut down.”

Coming out of the half, the Lady Bisons grabbed another one, this time eight minutes in from another sophomore, Grace Sarver, to cap off the night.

“The offense really stepped it up there,” senior Taylor Downs said. “They were tight on every ball, and our defense was super tight and super connected. We didn’t let any balls go through, and that was really good for us.”

Bald Eagle did threaten to break the shutout on a breakaway opportunity by McHenry and a rebound opportunity from Emily Shiels, but Mowry stuffed them again to preserve the clean sheet win.

“They move the ball excellently down the field,” Moore said. “They were very organized, and we didn’t quite find our space today. They didn’t make too many mistakes.”

Bedford will now turn its attention to Tuesday night and a matchup against South Park from the WPIAL in a PIAA first-round matchup. Downs wouldn’t be surprised if they make a run at playing in Hershey again.

“If we play like we did today, we have a good chance of making it all the way,” she said.