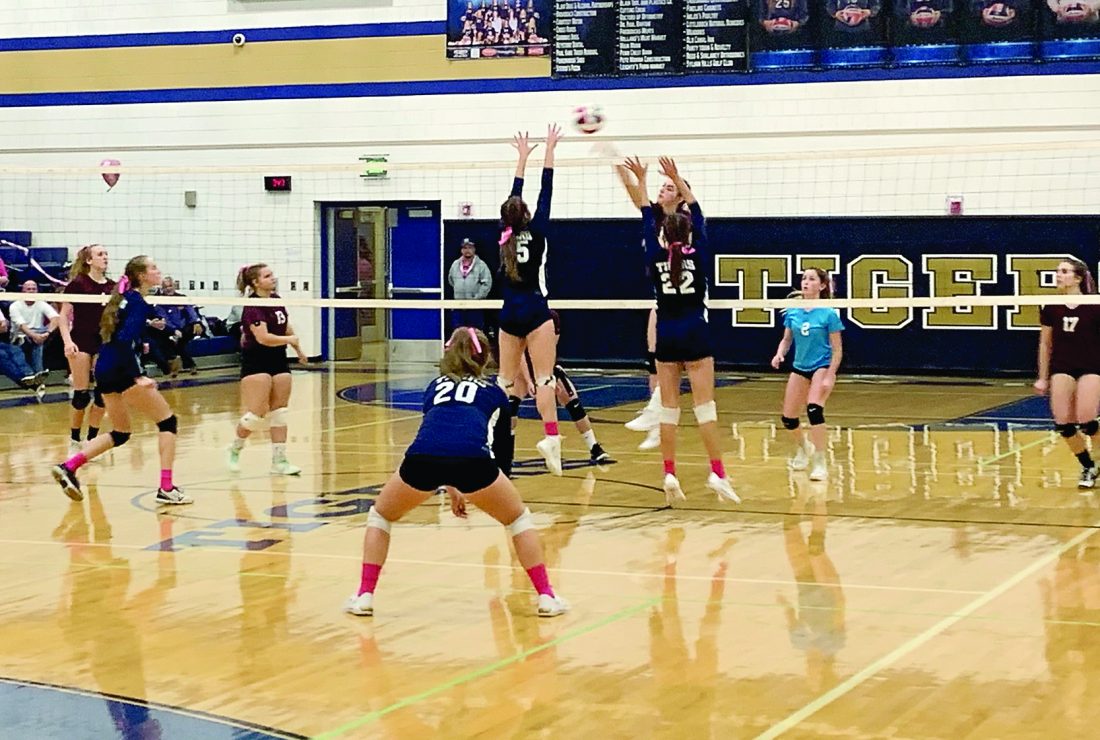 His mom was diagnosed about 11 years ago for the first time and beat the disease twice before ultimately passing away after a third battle.

“I saw how fast cancer can take someone,” he said. “All of this pink stuff, that’s why it means so much. I love the Sideline Cancer we do in this town, anything that we do that we can raise money for the families that are going through it.

“I know what it feels like and it sucks.”

Even though the Lady Tigers and Altoona Lady Spikers are rivals on the court, the two of them have been teaming for things bigger than volleyball this season.

“The reality is that when it comes to things like Breast Cancer, Brain Cancer, whatever cancers that the two groups are coming together for, it’s about life,” Altoona coach John Saboe said.

This time the cause was for breast cancer awareness as Hollidaysburg grabbed a 3-1 win over Altoona, 25-15, 23-25, 25-18, 25-19, Tuesday night in the Dig Pink for Breast Cancer Awareness match at the Hollidaysburg Area Senior High School Gymnasium.

Through the combined fundraising efforts, the two teams managed to raise $1,086.

“I tell these girls all the time it’s way bigger than anything that happens on that court,” Grenfell said. “It’s all about the community and what you do outside of the sport that matters.”

Once the match did get going, Hollidaysburg wasted no time getting on the board, thanks to an early 14-6 run. Bridgett Everett slammed home one of her team-high 11 kills to end the opening set, 25-15.

The Lady Spikers, though, answered in the second match, which seemingly no one could take control of until the final points of the set. That’s when middle hitter Ireland McClellan came up with two crucial kills of her own to tie the match at 1-1.

“Usually we can do a pretty good job establishing what we want tempo-wise with our serve,” Saboe said. “We demonstrated that in game 2. Games 1, 3 and 4 we struggled to keep our side of the court in system, and we weren’t able to keep the kind of tempo that we liked to keep.”

Those struggles didn’t last too long in set three as Allison Barton and Joelle DeLattre teamed up for a block to make it 5-2 Lady Tigers early on. Reagan Ferguson added an ace, giving the home team a 2-1 advantage in the match.

The Lady Tigers had three additional players in double figures in kills including DeLattre, Barton, and Isabella George — all chipping in 10 each.

Hollidaysburg now awaits a road trip on Monday to Bellefonte while Altoona will host Bishop Guilfoyle Catholic the same day after a tournament this weekend at Greensburg-Salem.