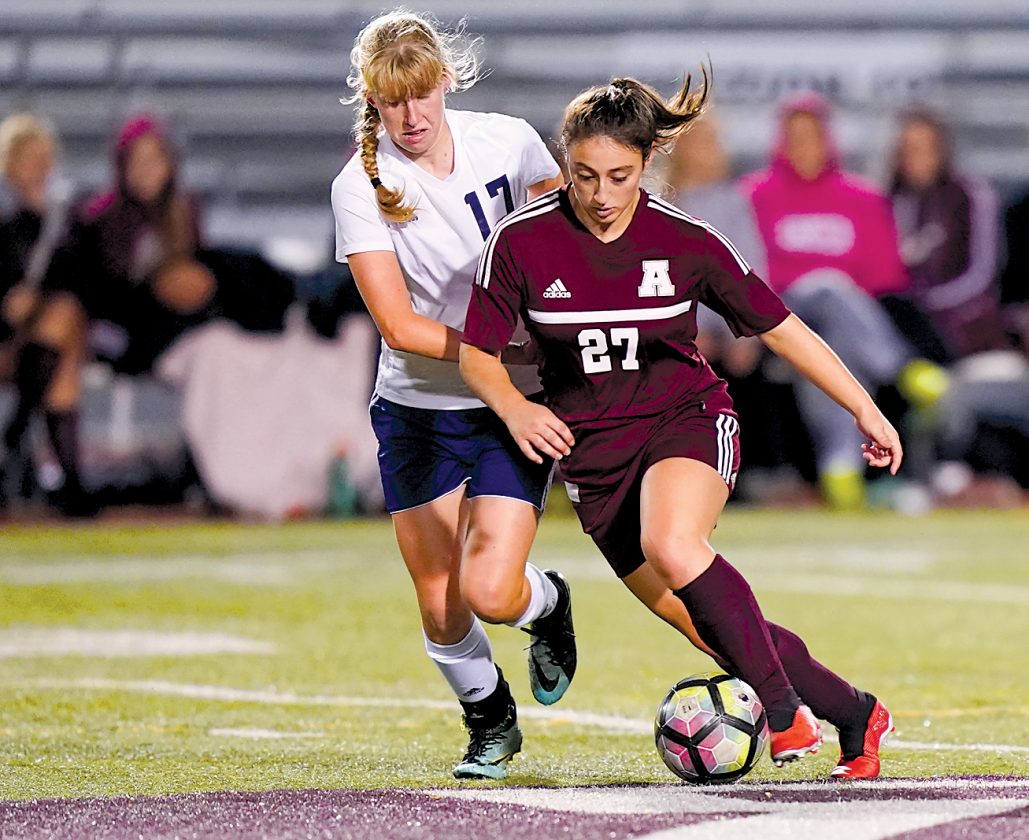 Photo for the Mirror by Chuck Meyers Altoona’s Ashlyn Irwin advances the ball while being defended by Hollidaysburg’s Lizzie Johnson.

But Altoona coach Derek Winterburn knows that there are much bigger fish for his team to fry.

Sophomore striker Morgan Sarver’s game-winning goal 2:26 into sudden-death overtime gave Altoona a 2-1 victory over Hollidaysburg under a full moon at Mansion Park, wrapping up a 14-3-1 regular season for Altoona.

But Winterburn and his squad will be concentrating on winning the District 6 Class 4A championship that eluded it a year ago, when Altoona set the previous single-season school record of 13 wins.

“It was a really good season — the girls were able to get the most wins in program history this year, which is nice, but after we take a couple days to enjoy it, we’ll start preparing for the playoffs,” Winterburn said.

Altoona will be the top seed in District 6 Class 4A, and will meet either State College or Mifflin County in the championship game in the last week of October.

Altoona withstood a gutsy effort by Hollidaysburg, which played nearly the entire game short a player after a Lady Tigers starter drew a red card for a foul less than 10 minutes into the action.

The Hollidaysburg player was ejected from the game after unintentionally getting her legs tangled up with Sarver and tripping the Altoona standout, who had a step ahead of the defense.

“Hats off to (Hollidaysburg),” Winterburn said. “To play with 10 players for 73 minutes with the kind of energy and pace they played at is incredible. We played well and we were able to get some scoring opportunities. We just didn’t finish as many as we wanted to.”

Hollidaysburg coach Dave Soellner, whose team dropped to 10-6, gave his players credit for a spirited showing.

“I’m very proud of our girls,” Soellner said. “They didn’t quit, and they kept battling. (Altoona) beat us pretty good (3-0 in a matchup at Hollidaysburg Sept. 10) early in the season, but I thought we played much better tonight, even with a player short.”

Soellner was diplomatic in his assessment of the call that resulted in the ejection of his player.

“I haven’t seen it happen too often, but it does,” Soellner said. “It’s a call that I wouldn’t want to have to make. Our girl got tangled up with their girl, who had a step on her. It wasn’t done intentionally. But we didn’t let that define the game tonight.”

With the score tied, 1-1 in overtime, Sarver got free in front of the Hollidaysburg cage and converted an assist from senior teammate Katie Aveni to give Altoona the victory.

“Katie Aveni took a shot and it deflected off one of (Hollidaysburg’s) defenders, and I just put it into the back corner,” Sarver said.

Altoona opened the scoring exactly 33 minutes into the first half, when junior attacking midfielder Darrian Berkheimer found herself open in the middle of the field less than 20 yards away from the cage and scored on a low shot.

“It was just bouncing in front of the net,” Berkheimer said of the ball that she turned into the game’s first goal. “I just ran in, and took a touch forward and found the back of the net.”

Hollidaysburg tied the game, 1-1 at the 12:31 mark of the second half, when junior Rita Kendziora took classmate Alyssa Bell’s pass on the right wing and booted a high shot into the cage from 15 to 20 yards out.

The game stayed tied throughout the rest of regulation thanks to a couple good saves from Hollidaysburg junior keeper Meghan Cutshall, who made 10 saves in the game.

Both Altoona and Hollidaysburg misfired high or wide on promising scoring opportunities during the regulation 80 minutes, but Altoona prevailed in the overtime session.

“We always have a good competition with them,” Sarver said. “I just wanted to stay calm and put one in back of the net.”

Game notes: A moment of silence was held prior to the start of the game in memory of Kori Hileman, the father of Altoona sophomore outside back Ashytn Hileman. Kori Hileman died last Friday at the age of 45 after waging a courageous one-year battle with leukemia … Hollidaysburg, which dropped to 10-6, visits DuBois Wednesday night … Altoona won the junior varsity game, 1-0, on a second-half goal by Brooke Thomas and the combined shutout goalkeeping of Caranda Perea and Quinn DeAntonio.