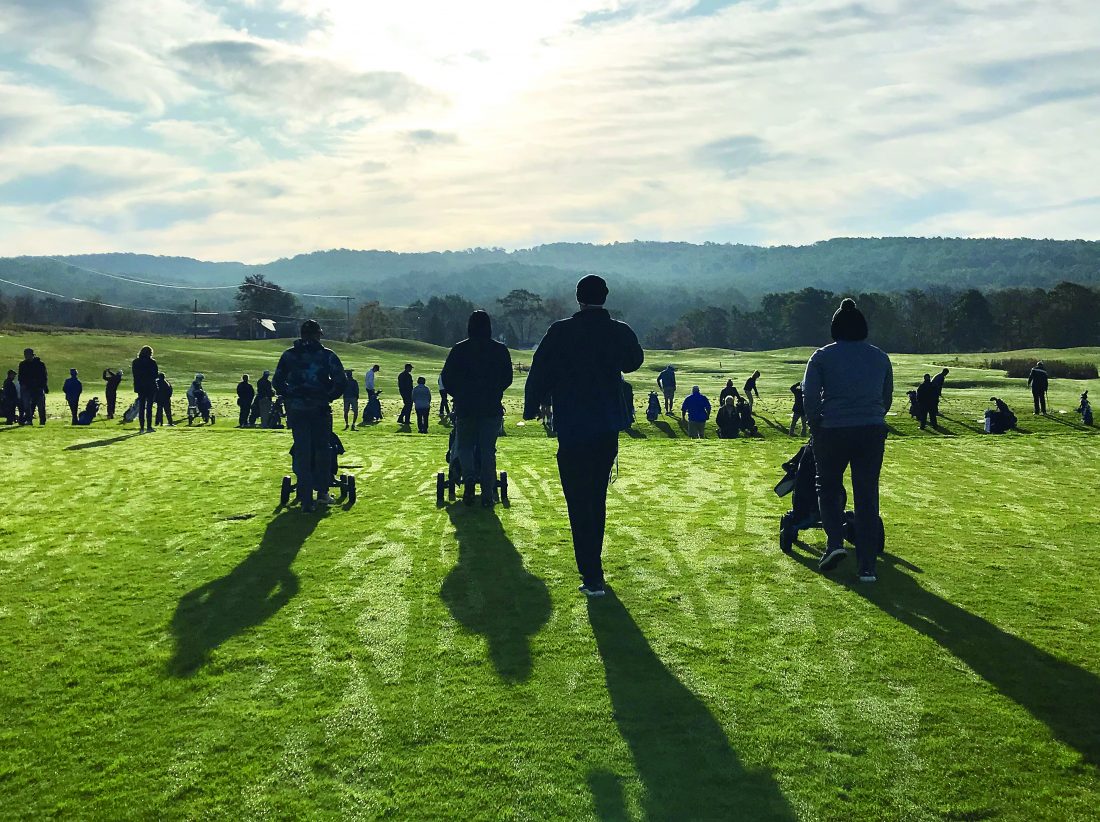 Mirror photo by Michael Boytim Members of the P-O golf team get ready to start their day at the state regional tournament on Tuesday morning.

Chad Frank, the District 6 runner-up, and Brandon Singer, who chipped in on his last hole of regulation in districts to force a playoff for the final spot at regionals, will play for the individual state title at the Heritage Hills Golf Resort in York next Monday and Tuesday.

Frank shot a 76 and tied for eighth overall, and Singer’s 78 was good enough for a tie for 13th. The top 22 players in the Class 2A boys field advanced.

“I can’t say enough about Chad,” Philipsburg-Osceola coach Jordan Albright said. “He’s got a lot of talent. That kid can pound a golf ball. He had a bunch of birdies down the stretch.”

Frank missed Philipsburg-Osceola’s practice at Tom’s Run on Saturday, so he was playing the course for the first time.

“It was a little challenging,” Frank said. “I had a similar experience at Windber where I had not played there before and did well without seeing the course, so it was good to come out and play well. My wedges really helped me a lot.”

Singer will be making a return trip to Heritage Hills after playing there in the team championships as a freshman.

“Having to chip in on my last hole to make the playoff at districts was big for me,” Singer said. “I got into states today by one shot, but I’m hanging in there.”

Albright was thrilled Singer made the most of his second opportunity after edging teammate Jake Vaux in a three-hole playoff in districts for the final spot.

“At districts, he certainly didn’t have his best,” Albright said. “Not to make excuses for him, but he wasn’t hitting it well, and he had to grind it out. We had some time to work on his swing, and we made some adjustments. When he played here Saturday, he hit it pretty well and liked the golf course.”

Two more Mounties, Keegan Soltis and District 6 individual champion Ky Bender, did not advance. Soltis tied for 28th with an 82 and Bender was tied for 32nd with an 83.

The Mounties will compete for the team state title in York next Wednesday.

Bedford’s Jared Turner, the District 5 third-place finisher, booked a return trip to the PIAA championships by carding a 77, good for a tie for 11th, after he made it as a junior last season.

“I can work with hitting a lot of irons off the tee, and this place calls for that,” Turner said. “It helps me out here.

“I hit the ball really well and putted well. I had a couple bad holes, but I made up for that with a couple birdies.”

Hollidaysburg’s Eric Davis had one of the more heartbreaking rounds of the day.

The Golden Tiger junior was tied with Cathedral Prep’s Evan Rowane at 3-under par through nine holes and held the Class 3A lead.

He made four birdies on the front nine and made par on No. 10 before things began to unravel. A pair of bad chips led to a double bogey on the par 3 11th hole before Davis made a three-putt bogey on No. 12.

He recovered with three straight pars before hitting into a bunker on the par 3 No. 16. Three more bad chips led to a triple bogey. His drive missed left, and he chipped over the green on No. 17, leading to another bogey that ultimately cost him a chance to play in a playoff.

“Everything on the green was working, and I was making a lot of putts,” Davis said. “I didn’t have too many worries coming into the day. It just didn’t come together, I guess.”

Davis’ round of 76 would have been more than enough to advance in Class 2A, but there was a playoff for the final PIAA position in states at 3A featuring two players that carded 75. Just 10 players moved onto states from the Class 3A field.

Another local player made it into a playoff, but once again it wasn’t meant to be.

Central Cambria senior Jaylee Sikora, who lost the District 6 title to Tyrone’s Cassidy Miksich in a playoff, made bogey on her playoff hole after hitting her drive into a bunker. Unfortunately for Sikora, Forest Hills’ Liz Zajdel made a 6-foot par putt to clinch the final spot at states in the Class 2A girls field.

“I felt so excited,” Zajdel said. “I knew I wanted to end my year going to states, and I had that mentality my whole round. Going into the playoff, I had the mentality that I was not losing. There was no way I was going to miss that putt.”

Sikora, who will be playing in the team championships with the Lady Devils next Wednesday, was pleased to be in the playoff after a few rough holes.

“I had two 8s and two 7s, but I came back with an 88,” Sikora said. “I’m impressed with myself for that. I kept my mental game strong and played well on the par 3s.”

Penn Cambria’s Kayla Ringler just missed the playoff by carding an 89, and Miksich shot a 94.

The following is a look at the round of Hollidaysburg’s Eric Davis, who shot a 76, tied with Philipsburg-Osceola’s Chad Frank for the best mark in the Mirror’s core coverage area, however he missed the cut in a very strong Class 3A field.