May is tops at LHAC championship event 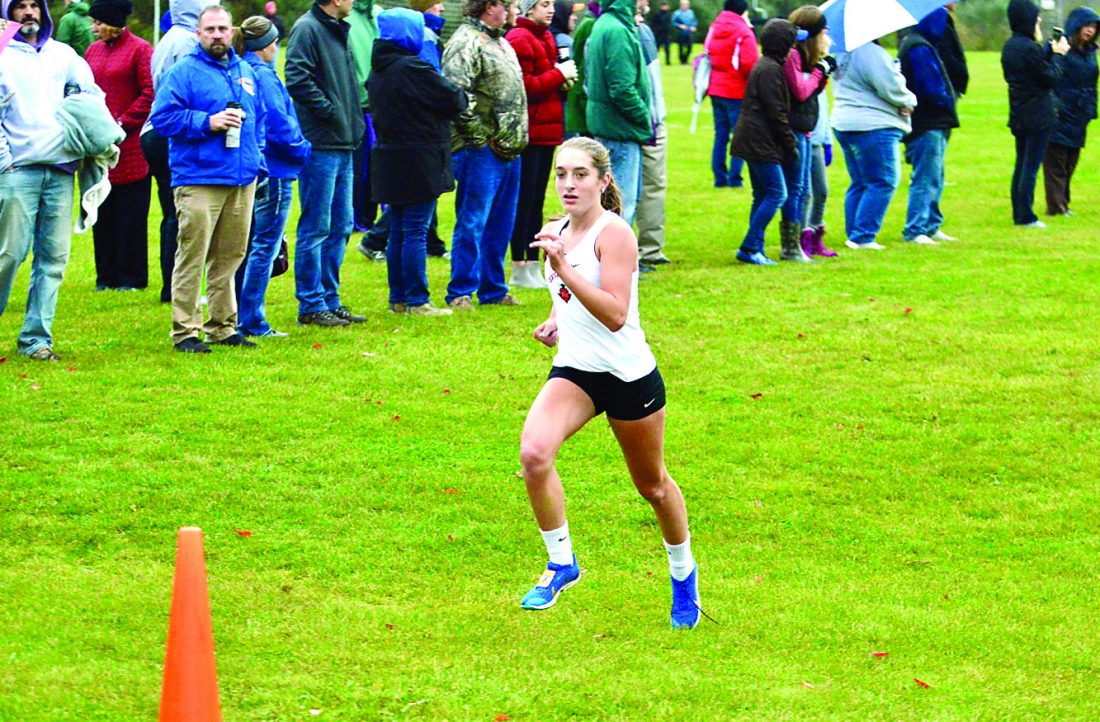 Photo for the Mirror by  Calem Illig Central Cambria’s Stella Kuntz won the girls race on Wednesday afternoon in the rain in 19:26.

EBENSBURG — A strong gust of wind resulted in a cold afternoon, but Bedford junior Van May stayed fiery hot on the cross country course.

He finished the Laurel Highlands Athletic Conference championships Wednesday at Central Cambria High School with his best performance of the season to take home the conference crown.

“It’s nice to win this since I lost it last year,” said May, who earned his second LHAC title after previously winning in 2017. He finished second last season.

“It’s nice to rebound and win it again.

May finished the windy affair in 16 minutes, four seconds to finish first among 105 boy runners.

It was a personal best for him by three seconds.

He was locked into a tight battle with Westmont Hilltop’s Nick Fetzer, who was the reigning LHAC champion.

“I was nine seconds behind him at (the Altoona Mountain Lion Invitational), but I was able to put it two solid weeks of training,” May said of his strategy to defeat Fetzer. “I worked on my endurance. I was really able to really push the pace.”

May finally gained separation in the last quarter of the race to unseat the defending champion.

“My goal today was just to get right with (Fetzer) immediately and try to get through the first mile around five (minutes) flat,” May said. “I really tried to push the pace through the second and third mile.”

The Central Cambria duo of Toby Cree and Nate Kuntz ran the entirety of the race together to claim third and fourth place, respectively.

The two finished with an identical time of 17 minutes, five seconds.

“We ran this just like any other normal race,” Kuntz said. “We ran as a pack and ran together. That really worked for us.”

Central Cambria’s strongest performance of the afternoon was from sophomore Stella Kuntz, who won the girls crown with a first-place finish of 19:26.

“After last year and getting second, I was so happy. Going into this year, I knew that I could do it,” Kuntz said.

Several runners were obviously impacted by the cold weather, which made it difficult for many to breath.

But Kuntz looked unbothered by the chill conditions as she passed through the finish line with plenty of energy left.

“I love the cold weather. I like it colder when I run,” Kuntz said. “We were all just really pumped up to run today.”

As a key member of Central Cambria’s state championship team last fall, Kuntz is looking to guide the Lady Red Devils back to glory this season.

Though claiming the conference title was special, her sights are already looking forward.

“Being able to move onto districts and potentially win there as a team means more to me than winning LHAC’s,” Kuntz said. “I’m so excited for districts.”

Helping push her for much of the race was freshman teammate Annaliese Niebauer, who finished third at 19 minutes, 48 seconds.

“I was very happy with how I ran,” Niebauer said. “I went back to my normal race-prep routine. It was a good race.”

Niebauer raced with Kuntz for over half the race until finally losing some traction in the last quarter.

“It helped keeping up with (Kuntz),” Niebauer said. “I felt myself starting to die down a little bit at the end and didn’t want to hold her back. I told her to just go.”

Central Cambria also had a fourth-place finish from freshman Abbie George at 20:09.