Eleven years of waiting over for Lady Lion tennis program 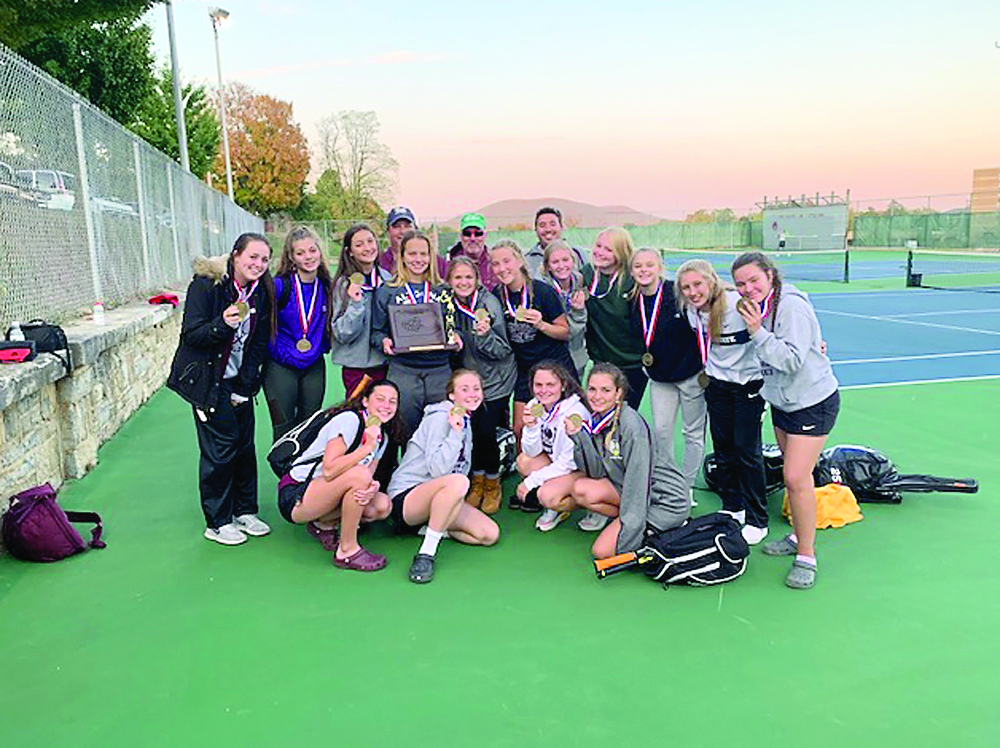 STATE COLLEGE — Altoona singles players Morgan Stevens and Emma Skelley dropped their rackets in mid-match and sprinted to the middle court to join in on the celebration.

The Altoona Area High School girls tennis claimed its first District 6 Class 3A title in 11 seasons when its No. 1 doubles team of Isabella Frank and Sophia Caputo earned the Lady Lions’ their third point in a 3-0 victory over top-seeded State College on Tuesday at the State College Area High School Tennis Center.

Frank and Caputo hugged after the final point with Stevens, Skelley and the rest of the team sprinting to join the party. It was a big contrast from last season when Altoona was swept by State College in the semifinals at the same site.

“Our team this year doesn’t resemble last year’s much,” Altoona coach Eric Hovan said. “It’s a testament to people working hard. These girls worked so hard in the offseason — working all winter, helping to manage (the boys team) in the spring and playing five days a week in the summer. I’m glad to see them rewarded on the big stage.”

“We had a stretch where we won like 15 out of 16, and you kind of take it for granted,” said Hovan, now in his 23rd season as coach. “After spending the last 11 years (not winning), it makes you appreciate it even more. I’m so happy for the kids. They really deserved this.”

District 6 3A singles champion Alese Rinker, the only senior starter for Altoona on Tuesday, savored the moment as the Lady Lions posed for photographs after the match.

“This is so great because it’s the whole team,” Rinker said. “It’s a great feeling to see how hard we, as a team, competed for every point.”

Rinker was able to watch much of the match because she won the No. 1 singles match relatively quickly, 6-3, 6-3, over State College’s Quiana Guo.

Altoona built its lead to 2-0 when juniors Mya Crownover and Emily Neil persevered in a first-set tiebreaker in the No. 2 doubles match and knocked off State’s Saoirse Hopp and Sruthi Ramesh, 7-6, 6-4.

The other three matches were tightly contested with Stevens, a freshman, and Catelyn Janac locked in a second-set tiebreaker after Stevens won the first set, 6-4. Skelley, a sophomore, had led Marissa Xu after the first set (6-1) but dropped the second (6-3) and trailed in the third, 3-0.

Frank, a junior, and Caputo, a freshman who stepped in for injured Eve Hogan, battled back from a 6-4 loss in the first set to win the second, 7-5, before finishing off Emily Zhang and Rachel Butterbaugh, 6-3, in the third for the match clincher.

“The score ended up 3-0, but I had said to (assistant) coach (Mark) Sapita, all five matches could go either way,” Hovan said. “The fact that the girls stepped up and competed in the biggest points of the matches is a credit to them and the heart they showed.”

“It was a really great match,” State College coach Jane Borden said. “I’m proud of Altoona, and I’m proud of how our kids played. We can’t lose sight of the fact that we had a great season with this young group.”

Altoona (15-3) will now compete in the PIAA team tournament with a first-round matchup against the District 7 champion at a District 7 site on Tuesday.