Can’t spell comeback without BC: Huskies erase 2-0 defecit to win title against Wolves 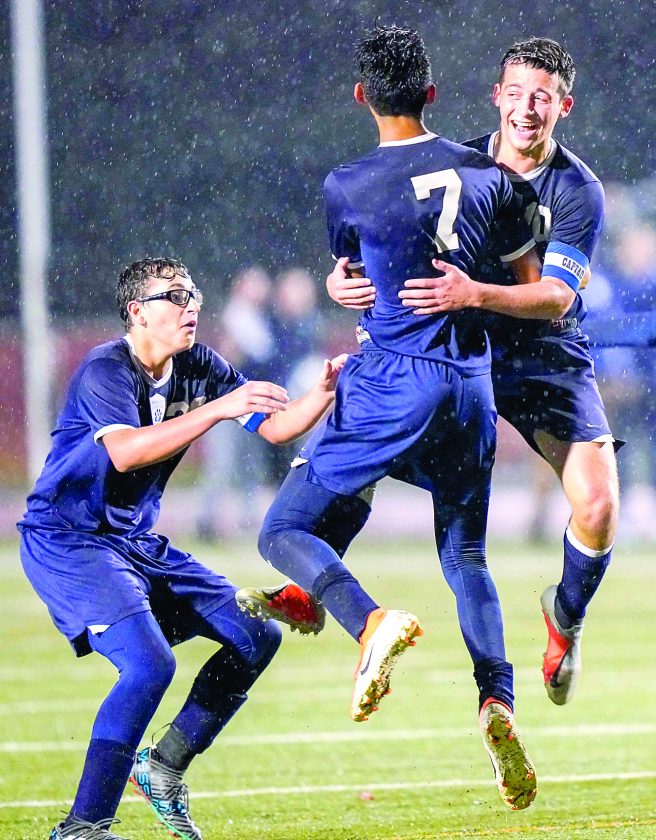 Photo for the Mirror by Chuck Meyers Bishop Carroll’s Edwin Maykovich (7) celebrates with teammate Jackson Hudkins, who hit the game-winning goal in overtime Wednesday night at Mansion Park in Altoona against West Shamokin.

All season long, the Bishop Carroll High School boys soccer team has become stronger as its games have gone along.

“Our second halves this season have always been better than our first halves,” Carroll junior striker-midfielder Jackson Hudkins said.

That was the case again on Wednesday night, with the stakes at their highest.

Carroll won the District 6 Class 1A championship game by overcoming a 2-0 second-half deficit and defeating West Shamokin, 3-2 on Hudkins’ goal 3:56 into overtime in a light but steady rain at Mansion Park.

Hudkins ran through the middle of the field and picked the lower right corner of the cage with a shot that went along the ground, past junior keeper Evan Cornish, and into the back of the net for the game-winning goal that sent Carroll (13-7) into the first round of the PIAA playoffs next week against the WPIAL runners-up at a site and time to be determined.

“When I got the ball, I saw a gap between two defenders,” said Hudkins, who also drew assists on Carroll’s first two goals late in the second half. “I knew there was a teammate open, but I thought that I needed to take the shot.”

Carroll coach David Paronish wasn’t sure that it went into the cage at first.

“I thought it hit the side of the net at first and went out, but it bumped off their goalie and went in,” Paronish said. “It was a great game. West Shamokin played an awesome game. We had to fight our way back. It wasn’t easy.”

Trailing 2-0, Carroll took the play to West Shamokin in the second half and got on the board on junior Edwin Maykovich’s short shot off a Hudkins assist with 16:37 remaining.

“In the second half, we controlled the ball better, and we put more pressure on both the offensive and defensive end,” Paronish said.

Carroll tied the game with 9:47 left when Hudkins got a free kick from near midfield and sophomore outside midfielder Timmy Golden adroitly headed it into the cage.

That set up Hudkins’ heroics in the overtime session.

“This year was a good year,” Hudkins said. “I feel like we all came together as a team. This team is like a family. It’s amazing.”

Carroll entered this year’s tournament as the top seed, but West Shamokin (8-8) had won the District 6 Class 1A title in both of the past two seasons.

West Shamokin looked as if it had a good leg up on a third title, thanks to two goals by junior forward Luke Alese.

Alese scored on a laser shot from about 10 yards in front of the cage at the 17:42 mark of the first half, then added a second goal at 6:37 of the second half by unleashing another rocket following a throw-in pass from a teammate.

West Shamokin outshot Carroll, 8-3 in the first half, but the Huskies responded with an 8-6 shots advantage in the second half and a 2-0 edge in the overtime session.

“We lost nine starters,” Coach Alese said. “I never even dreamt of us getting this far. We’re fortunate. We have kids on the team who had never even played the game before this year.”

That said, the coach was disappointed in how this championship game wound up.

“We didn’t get blown out, we gave it away,” Coach Alese said. “It’s just a bitter pill to swallow.”

Wednesday’s game was sweet for Carroll senior goalkeeper Joey Bernard, who stopped a break-in attempt by Luke Alese with eight minutes left in the game and drew hefty praise for his play in the game from Paronish.

“For the past four years, we haven’t won a playoff game, so for us to not only win a playoff game, but to also win a district championship, is something special,” Bernard said. “This is my senior year, so it’s kind of a good sendoff, a good way to end my career.”

Paronish was a sophomore player on Carroll’s last district title team, in 2007. He now has a coaching championship to his credit.

“This program has grown so much, and the development has been fantastic,” Paronish said. “It’s great to have another District 6 championship under our belts.”

WASHINGTON — Facing another deficit and the prospect of their losing streak dragging on, Capitals players ...

LORETTO — For the first 15 minutes of the opening half, Saint Francis and LIU battled back and forth with neither ...