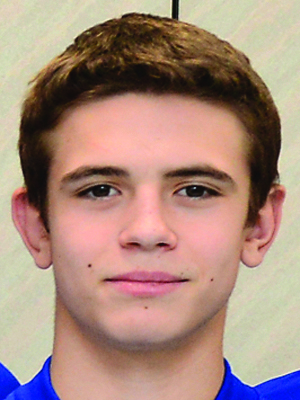 Glendale’s Brock McMillen, the reigning PIAA Class 2A state champion at the 126 pound weight class, announced on Twitter earlier this week that he verbally committed to continue his academic and athletic career at the University of Pittsburgh as member of the Class of 2021.

McMillen, a junior, won the first state wrestling championship in program history for Glendale with a 3-2 win over Bishop McDevitt senior Chase Shields back in March.

He said the closeness of the school to home was the big factor in his commitment to the Panthers. He had also been considering Purdue and Northern Illinois.

“I felt like everyone wants to go to a place where they feel like they fit, and I just felt like I was at home,” McMillen said. “The coaching staff made me feel at home.”

With two more years left in his high school career, McMillen isn’t completely set on what he wants to pursue academically when he gets to Pitt. However, he does want to do something in business.

On the mat, McMillen says he might move up a weight class this year, and has some short- and long- term goals for his junior season.

“Leading into the season, I’m just looking to reach my potential and do my best,” he said. “Long term, I want to win all of the end-of-the-year tournaments.”

His coach at Glendale, Billy Dubler, is really excited to see a lot of the hard work paying off for McMillen.

“Brock has been working really hard and putting in tons of hours, and to see it pay of for him going to Pitt at the Division I level is a dream come true, and we can go support him and we can get some Glendale kids to go down and support him,” Dubler said.

“Brock is a trail blazer and there are some other kids on the team that he sets a good example for.”

Dubler praised McMillen’s track record in the classroom as a 4.0 student, and his ability to have a school-sports balance that not every athlete can achieve.

“You can’t go to Pitt without good grades,” Dubler said. “Sports are great, but the education is the main focus and for Brock to be able to balance that and be a state champion shows his total commitment.

“His being so goal oriented and setting little goals and meeting his requirements and succeeding and reaching those goals shows you can set them and achieve them if you work towards them. It means everything to me and gives a lot of these other kids hope.”