Husband versus wife: Jason, Cassie Layman coach against each other 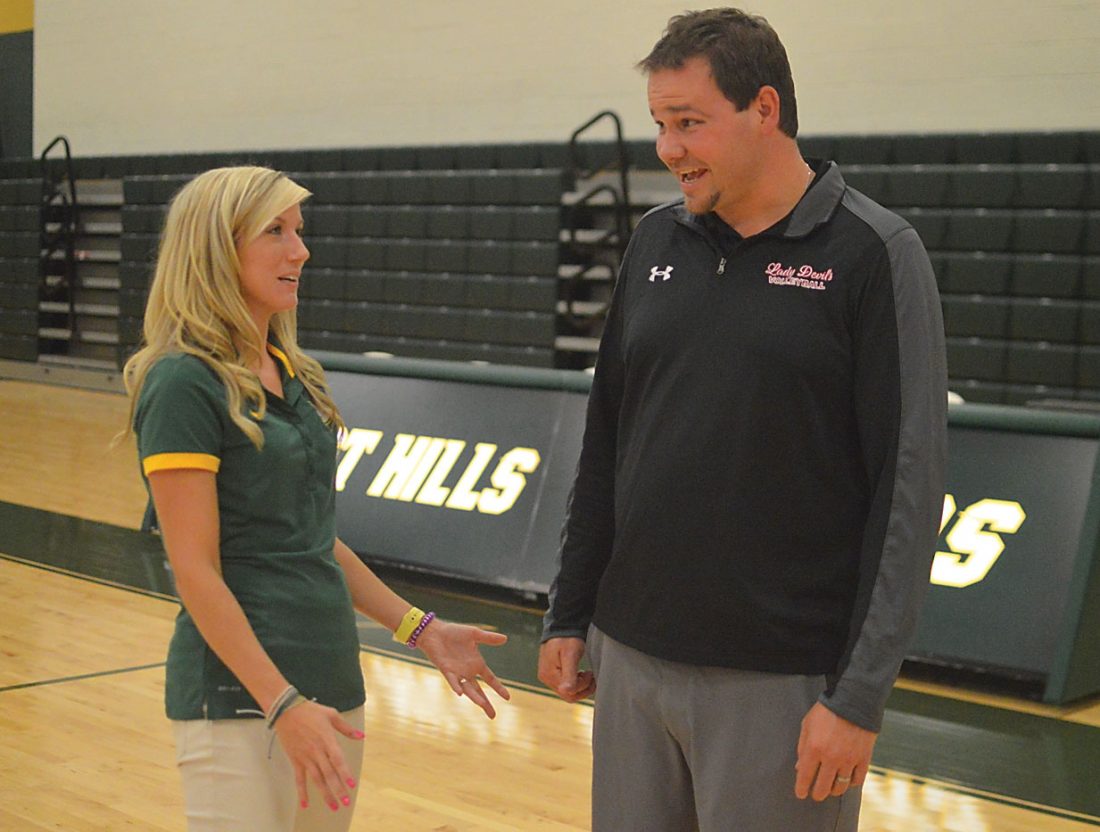 Photo for the Mirror by Calem Illig Cassie and Jason Layman talk on the court after Monday night’s match between Cassie’s Forest Hills team and Jason’s Central Cambria team. Jason’s squad got the best of Cassie’s team in five sets.

The Rangers are coached by Layman’s wife, Cassie.

“It was definitely a different dynamic looking across the court and seeing my wife,” Jason said. “I had a bit of an eerie feeling for a while. It was fun. It was enjoyable. I’m sure we’ll have a lot to talk about tonight.”

It was the first head-to-head coaching matchup of the spouses after Cassie was appointed coaching duties of the Lady Rangers earlier this year.

She was named coach solely for the 2019 season while incumbent Nicole Kerr is out on maternity leave. Cassie worked as the girls junior high coach at Forest Hills prior to this season.

“It was hard. I’ve coached with Jason for many years now,” she said. “I know how he coaches, and I knew that his experience was over me.”

The two commonly coach together on the Ridgetop Storm AAU club volleyball team that advanced to the national tournament in Florida this summer.

“I’ve never seen her coach from this aspect before,” Layman said. “I’ve either been on the same team as her or across the gym. I’ve caught myself numerous times watching her and seeing what she was doing. She’s a very good coach. She’s smart, and she knows the game.”

Forest Hills seemed to be in the driver’s seat after dominating in the third set. A slew of kills from Maddie Cecere along with strong blocking from the duo of Lexi Koeck and Taylor Burda helped spark a 10-2 run by the Rangers that resulted in Forest Hills jumping to a 2-1 lead.

“I really thought we played amazing,” Cassie said. “We capitalized at the net, we hit. All-in-all, I could not be happier with how we played.”

After being routed by double digits in set three, Central Cambria battled back with a strong defensive effort in a do-or-die situation for set No. 4.

The Red Devils were fueled with 19 digs from libero Cassidy Bezek, who helped lead the charge defensively.

“We’re still getting to know each other,” said Bezek, who also had a strong night at the service line and led her team with nine points. “We’re all playing together for the first time this season. In the back row, we have to talk all the time. We have to move and read our hitters. We started to do that really well toward the end.”

Forest Hills took a 3-point lead in the final set and was poised to stretch that lead to four, but an electrical error in the gymnasium quickly shifted the pace of the game.

As Central Cambria struggled on a serve receive, the lights in the gymnasium shut off, which forced the officials to negate the play.

Central Cambria responded with a 10-4 run to close out the night.

“The opportunity was there, we just didn’t capitalize,” Cassie said. “(Central Cambria) did, and that might just be their experience in those big games.”

Following the game, Jason said he was impressed by the performance of both the Rangers and his wife.

“I’m hoping later in the year in either the conference or district playoffs, we can meet again,” he said. “They’re a tough, competitive team. They showed that tonight.”