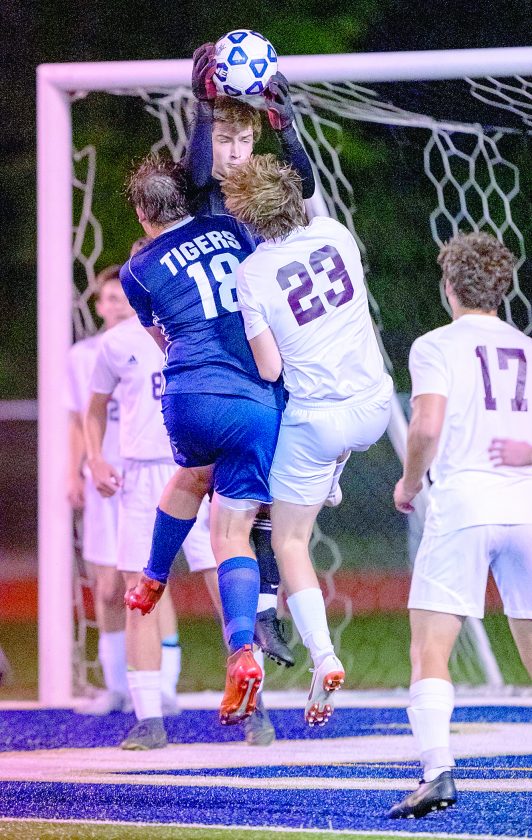 Photo for the Mirror by Chuck Meyers Altoona goalie Brady Freiwald makes a save in front of a crowded goal during Thursday night’s win over Hollidaysburg.

Keepers Brady Freiwald of Altoona and Evan Shale of Hollidaysburg were outstanding all night, but the Mountain Lion senior was able to keep his cage clean and that was the difference.

Altoona’s first goal came on a penalty kick before the game was three minutes old and the Mountain Lions’ other two scores came in the final two minutes of the second half.

“My heart rate is finally back down,” Altoona coach Dave McCarter said with a grin. “With about five minutes left and the score 1-0 … you don’t know.

“It was a great soccer match,” McCarter continued. “Two quality programs going at it. Great atmosphere. It was a war for a long time.”

“It doesn’t get better than that,” Shale offered. “It was an awesome game … two of the top teams around going at it and it comes down to a couple chances.

“Honestly, I think we had the better chances and it might have been different if we had put a couple of our chances away,” Shale noted. “The score is very flattering because it was a lot closer.”

Less than three minutes into the game, Hollidaysburg was called for a penalty inside the box and Altoona junior Graham Black pushed the ball past Tiger keeper Evan Shale on a rebound.

“He’s such a good keeper,” Black said of Shale. “I tried to pick the bottom right corner, but he still saved it the first time.

“I took my chance the second time and got the goal,” Black said. “Usually it goes out of bounds after he touches it. When it came back, I just went for the left.”

“I didn’t see anything there,” Coach Shale said of the penalty, “but, if there’s going to be a PK, I’d rather see it at the beginning of the game because you’ve got plenty of time to come back.”

However, the Tigers were unable to push the ball past Altoona’s defense as Freiwald and company were outstanding while protecting the cage.

Evan Shale also was on top of his game until the Mountain Lions finally cashed in late. With 1:39 to play, Zach Kowalski, assisted by Alex Berardinelli, pushed one into the back of the net to make it 2-0.

“I can’t say enough about Zach Kowalski,” McCarter said. “He got hurt early but came in and scored a gorgeous goal … left post, no doubter.”

With only 14 seconds remaining, Austin Kravetz, assisted by Berardinelli, sealed it with the third score.

“Berardinelli came in on a ball,” McCarter said. “When he closed on it, the goalie (Shale) went down and it was on line for a goal. Kravetz, in a classy move, was letting Alex have the goal, but he realized it didn’t have enough momentum and he just tapped it in.”

McCarter raved about the play of keepers Freiwald and Shale.

“They were unbelievable,” McCarter said. “Both are really seasoned and they both stood on their head tonight. Hats off to both of them because I know how hard they work.

“You throw out the records in this game every year,” he continued. “It’s just a fun rivalry game. Great one tonight and the score isn’t indicative of the game.”