Patience pays off for Hinish 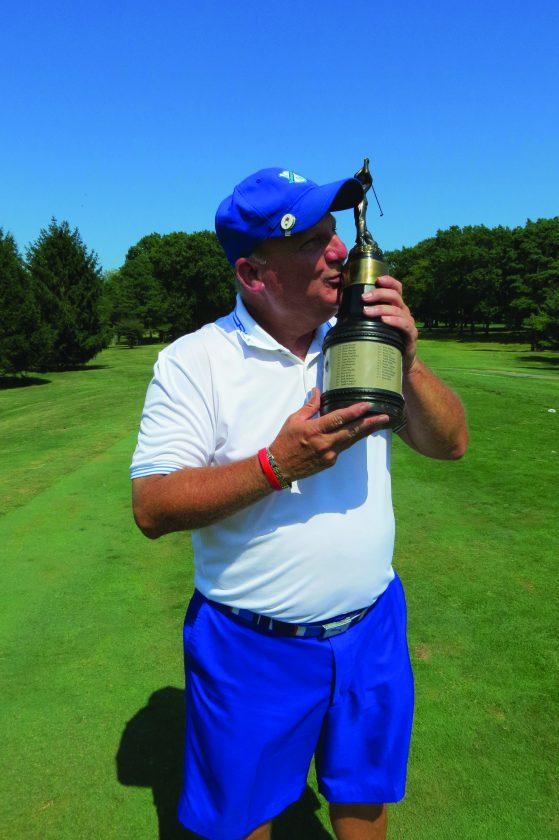 I’ve been a member at Iron Masters Country Club for four decades now and have played in the club championship each of those years.

This past weekend rounded out my 40th year, and this year’s finish was the most dramatic I’ve seen, but more on that in a little bit.

To begin with, I wanted to share a few memories of my favorite golf tournament of the year.

I first joined Iron Masters as a junior member while still in high school. I remember being a kid walking 36 holes on hot summer days like it was nothing.

I remember standing there and staring at it for what seemed like an hour.

I can still recall the names carefully etched onto that board — Dr. Ken England, the club’s first champion in 1962, Wes Lingenfelter, whose name appeared more than any other (seven times), plus names like Don Witherspoon, John Kerila and Squire Shaw.

I could almost hear orchestra music in the background as I read the names over and over again, and I can clearly remember thinking to myself, “If they engrave your name on a plaque like this, it must be a really important tournament … If I could even play in that event, it would be the greatest thing ever.”

Well, later that year (1979), I signed up for my first club championship and was placed in the second flight. I wouldn’t be playing with the club’s best players, but it was a start.

I can’t remember how I finished that year, but I do remember hanging around to watch Ron White win that year’s championship trophy.

It would be a few years until I actually qualified for the championship flight, but in 1983 I remember hardly sleeping the night before. Looking at that year’s tee sheet, I was paired with the three best players at the club: White, Lingenfelter and Garth Honsaker.

I was so nervous during the entire round but somehow found a way to remain upright. I finished in a respectable tie for eighth place, but my favorite memory that year was watching Honsaker beat Lingenfelter in a playoff.

It was at that point I let myself dream the unthinkable: Maybe someday I could have a shot at winning.

Over the next decade and a half, I worked hard on my game but watched as better golfers like Sean McLanahan and Gene Snyder took home the trophy. In 1993, I had a really good shot at winning, standing on the 17th hole with a one-shot lead over Kevin Feath and Sam Perry.

A quick double-bogey erased that lead, and Feath earned a well-deserved victory. I would replay those finishing holes over and over in my head for years. It didn’t matter, though, the finish was always the same.

Finally, in 2000, I played my best golf to date. I remember making a birdie on the last hole to win. It was almost too good to believe. My name would actually be engraved on that championship board, along with all the names I admired for so long.

More than anything, I remember getting into my car afterward and making sure all the windows were closed before letting out one the loudest screams of excitement I’ve ever made. I was finally able to do it!

One of the reasons I share some of my thoughts on the club championship today was to put this year’s tournament into perspective.

In recent years, Iron Masters’ club championship has been decided over four rounds of golf. It’s a full test of golf, and by the end, the best golfer is always revealed.

After this year’s first round, longtime member Ron Hinish shot a 71 to take the lead. At 62 years old, Hinish has long been the club’s best player to have never won a club championship. An accomplished player, Hinish has won multiple match-play titles and even captured the 2016 Iron Masters Classic, partnering with his son, Spencer.

Hinish has been a life-long supporter of Iron Masters and currently serves as the club’s president. It was great to see him leading after day one, especially knowing how strong his desire has been to capture his first club championship.

Just four years ago, he came to the last hole with the lead before a disastrous double-bogey spelled defeat.

During this year’s second round, Hinish continued his good play shooting a 74 to open a three-shot lead over Wally Clapper. He bettered that during last Saturday’s third round, scoring a 2-under-par 70 to take a five-shot lead over two-time defending champion Wes Elder.

Everyone at Iron Masters was thinking the same thing: Could the Hinish hold on to win the title he coveted the most?

After the front nine, we got our first update . Hinish had actually increased his lead to six shots. Maybe it could actually happen.

Over the next several holes, we held our breath but couldn’t tell exactly what was going on. Surely, Hinish was coasting to his first club championship after nearly 40 years of competition.

Unfortunately, our next update brought bad news. As Hinish approached the 16th green, he informed us he was now trailing Elder by one shot. A triple-bogey on the 13th and a couple of other bogeys led to his slide.

Now don’t get me wrong, everyone at Iron Masters admires Elder, but it was like a shot to the gut to see the disappointment on Hinish’s face.

I don’t really remember hitting a shot after that, because our full attention was now focused on the final group. We watched as Hinish pulled back to all even with a par on 16. He then made an unbelievable up and down on 17 to remain in a tie for the lead.

On the final hole, Elder slid his 18-foot par putt just past the hole, setting the stage for Hinish, who had a two-foot putt par of his own for the win.

“I really wasn’t nervous until that last putt,” Hinish said. “I was shaking so bad over that little two-footer. I was really happy to see that thing go in.”

As a fellow golfer, I can’t imagine the pressure Hinish must have endured — the stress of leading after every round, in a tournament he’s never won, a tournament he holds in such esteem.

It was impressive to watch.

Hinish is affectionately known among his best golfing buddies as “Greatest Ever,” and I know they all join me in shouting out congratulations on a well-deserved, championship win.

Ken Love covers local golf for the Mirror. He can be reached at gltr777@atlanticbb.net.