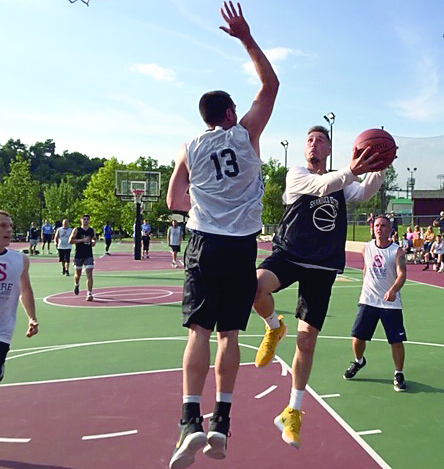 Photo for the Mirror by Gary M. Baranec Matt Michael of Shamrock Electric puts up a shot over Snare and Associates defender Brady Gehret.

Shamrock dropped two out of three regular-season meetings to Snare & Associates Mortgage Services but it was a different story in the playoffs.

Balanced scoring — seven players got on the board — as Shamrock Electric trimmed Snare & Associates, 47-35, in Friday’s playoff championship matchup at Lakemont.

It was the second straight Division 2 championship for Shamrock Electric. Snare & Associates were Division 3 champs a year ago before moving up a division this summer.

“We were missing a lot (of players) when we were losing earlier,” said Nate Cherry, Shamrock’s leading scorer with 11 points. “We’ve definitely worked better as a team since we got some of the newer guys.”

Seven players joined in the scoring parade for Shamrock with Cherry’s 11 leading the way. Michael Wigfield tallied 9 while John Potutschnig and Taylor Crippen chipped in with 8 apiece.

Cherry, a former Altoona High standout who will play collegiately at Slippery Rock, scored 9 in the first half as Shamrock Electric built a 23-15 lead at the intermission.

Potutschnig, who played at Glendale High, tallied 7 in the second half, helping Shamrock to keep Snare at arm’s length.

“We knew it would be tough underneath with their size — Tanner (Thomas) and Wiggy (Michael Wigfield),” Reffner offered.

“They have good guards, too,” Reffner continued. “Nate Cherry is one of the best guards out here. He had a good high school career and he can shoot over top of everybody. Even if you get a hand in his face, he’s tough, if he’s hitting.”

Cherry hit early and his teammates took up the slack in the second half. Snare & Associates fell behind early and never caught up.

“We just didn’t have enough time.”