And the winner is: First-timers take home title 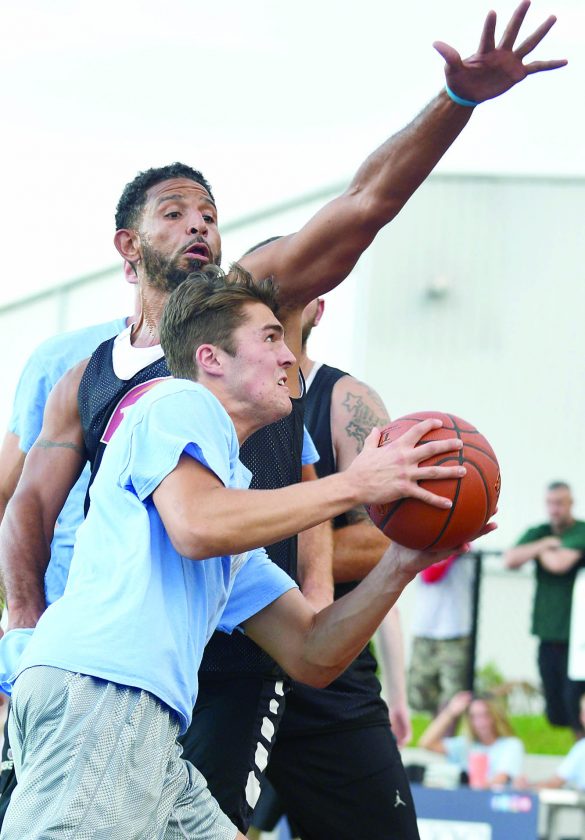 “It’s our first year in the league, there are a lot of tough teams, and we have a lot of young guys who needed to toughen up,” said Drew Friberg, a former all-state player at State College Area High School who is now playing NCAA Division I basketball at Princeton University. “We were expecting good competition, and that’s what we got.”

Led by Friberg, who earned the league’s Dick Hankinson Most Valuable Player Award for the championship game with a 12-point effort, second-seeded Spectra Wood pulled away in the second half and carved out a 60-55 title victory over fourth-seeded Dairy Queen Friday night.

The win gave Spectra Wood, which also got 13 points from Tommy Friberg, 12 from Cam Villarouel, and 11 from Brian Scholly — who is currently State College High School’s boys varsity basketball coach — a final season record of 13-1.

After falling behind, 25-23 late in the first half when Bishop Guilfoyle Catholic High School product Anthony Librizzi scored a layup for Dairy Queen, Spectra Wood used a pair of Scholly 3-pointers from the right side to take a 29-25 lead at intermission.

“I felt like we got some good shots throughout the whole half,” Scholly said. “There are a lot of really good teams in this league, and it was fun coming down here and playing in this league. That’s a testament to the people running the league. They do a really good job.”

Spectra Wood gained some separation in the second half, building a 40-31 lead on an inside bucket by Tommy Friberg.

After Dairy Queen (10-3) moved to within one point, 41-40, on a baby hook by former Altoona Area High School standout Manny Span with 7:06 left in the game, Spectra Wood went on an eight-point run to take control with a 49-40 lead.

Three field goals by Villarouel — on a layup, putback, and drive — as well as a field goal from the paint by Ryan McNulty, comprised the run.

“In the second half, we got some stops, we picked up a few turnovers, and we were able to get out and run and show some of our athleticism,” Scholly said.

A 3-pointer from the right side by Jacob Fleegle pulled Dairy Queen to within 49-43, but free throws by Friberg and Scholly bumped the Spectra Wood lead back up to eight points, 51-43.

Another Fleegle 3-pointer from the right side moved Dairy Queen to within four points, 53-49, before four free throws by Tommy Friberg sandwiched around a Villarouel dunk gave Spectra Wood breathing room and a 59-49 lead.

Two 3-pointers down the stretch by Fleegle, who had a game-high 25 points, made the final score closer for Dairy Queen.

“I thought it was a good game that went back and forth,” said Fleegle, a former North Star High School player. “They’ve got a bunch of good guys who are very talented, and who are either playing now in college, or who are going to play in college.”

Span chipped in 12 points and Rickens 10 for Dairy Queen.

“We played as a team, and for the most part, I thought we defended pretty well,” Drew Friberg said.

Kelly excited to be coach with Bucs

In the hope of turning over a new leaf in 2020, the Pittsburgh Pirates have undergone a front-office facelift and ...

HOLLYWOOD, Fla. — A warrant has been issued for the arrest of NFL wide receiver Antonio Brown following ...

DUBOIS — Marissa Stouffer set a new school record on the uneven bars with a 9.75 as Altoona topped DuBois, ...