Playing for yourself in summer becoming more accepted 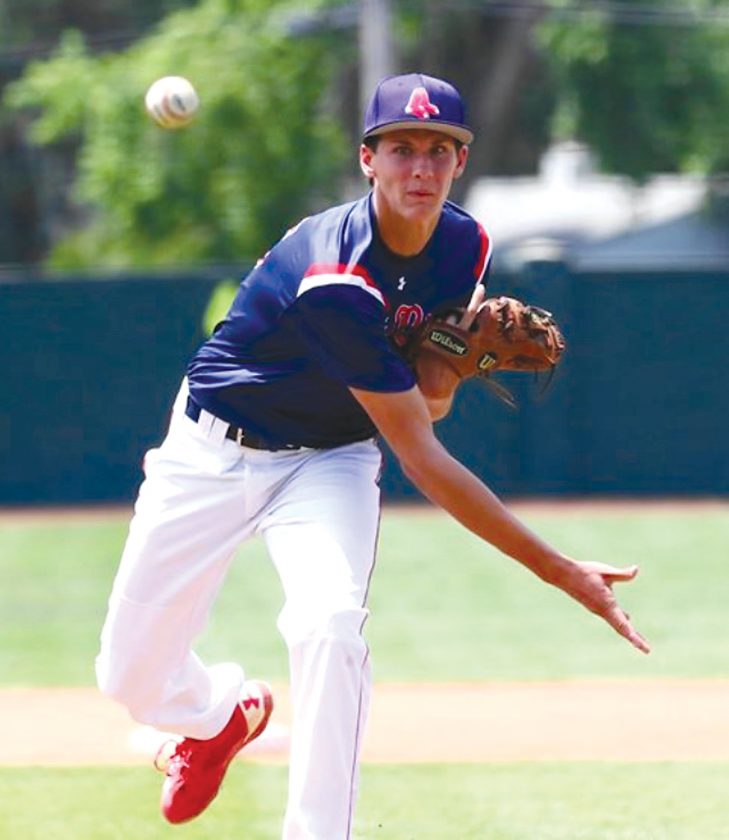 Courtesy photo Bellwood’s Travis Luensmann earned a baseball scholarship to the University of South Carolina, thanks in part to his traveling to different showcases throughout the East Coast.

Hensor and Grassi will actually be teammates at Miami, and both earned their opportunities largely through the U.S. Elite Baseball program.

“I’ve been running U.S. Elite for 13 years,” said Mark Helsel, an Altoona resident who is the founder and national director for U.S. Elite Baseball. “We focus on recruiting kids that have desire, talent and support from their parents to play baseball in college. We’re not having mass tryouts for everyone. When we find these kids, we invite them in and focus on their development and work on their individual skill set.

“Most programs put a team on the field, we look at each individual, tell them what they are and what they need to become, because college coaches are looking for a certain thing. It becomes a scout magnet. College teams have limited budgets, but when they send scouts to see us, they can scout all 14 kids they see play.”

Helsel’s program seems to go against what you’ll hear in almost every youth baseball dugout across the country. He makes it about the individual — not the team.

As jarring as that may seem at first, it seems to be working for kids who want to pursue a spot on a Division I baseball roster. U.S. Elite, along with Flood City Elite and programs like Perfect Game USA, have been consistently providing avenues to the next level through travel teams and showcases.

Hensor’s brother, Bryce, also played with U.S. Elite and earned a roster spot at Division I Morehead State along with Bishop Guilfoyle graduate Will Lozinak.

“My brother played for (U.S. Elite) his whole teenage career,” Hensor said. “The organization teaches you to play the right way and the way college coaches want to see you. It teaches you how to perform on and off the field.”

Helsel explained some of the non-baseball skills his organization teaches.

“We don’t pretend that baseball is life,” Helsel said. “It is a great precursor to life, and we teach life skills while we have their attention. Baseball doesn’t last forever, and as much as we love baseball, the foundation of our program is core values of commitment, loyalty and goal setting. We work on communication skills and train kids how to communicate. We’ll do phone training and role play to help them be ready for calls from coaches. That’s the bigger play, because we’re interested in personal development.”

“The biggest thing is respect when you walk into a building,” Hensor said. “When you talk to coaches, you look them in the eye and give them your full attention. You should always be polite, because that’s a relationship you can have forever. You don’t want to burn any bridges.”

The Juniata Valley senior-to-be said transitioning to the attitude of putting his own game ahead of the team’s performance while playing games in Helsel’s program didn’t take long.

“I always took into consideration that at the end of the day, I was trying to find a college that’s a fit for me,” Hensor said. “You’re playing team ball still, and trying to help win the game, but it’s not about winning. If you’re doing your job, you’ll be putting yourself in situations to win the game. You just don’t really feel bummed if you lose, as long as you’re getting better each day.”

Helsel’s sons, Christian and Zack, both came up through the program and played at Division I schools. Christian Helsel played at Ole Miss and Penn State, and Zack Helsel is at UCF.

Christian Helsel served as somewhat of a test subject when his father began the program.

“This area is not a feeding ground for that level of baseball,” Helsel said. “You’re not going to play local baseball and focus on team baseball and make it. You have to concentrate on you being the best you can be. That’s how you get where people from around here don’t get. You have to put together a plan that makes sense for that goal.

“Christian wanted to play Division I baseball as his goal, and playing at Seitz or in the (Kelley) Federation doesn’t make sense for that goal.”

That doesn’t mean local leagues serve no purpose. Klotz is a member of the Flood City Elite, but he also plays for the Claysburg Cambria County American Legion team.

“Playing for the love of the game with buddies and friends is important,” Central High School varsity baseball coach A.J. Hoenstine said. “Playing for something and trying to win a league championship or whatever it may be can create memories and make an impact. Travel tournaments can be just showcases where you’re just going to play four games over the weekend and that will be it. The games are preset, and winning doesn’t change anything.”

The majority of kids playing baseball this summer aren’t even thinking about Division I opportunities. The idea of playing for yourself seems selfish when considering even a decade ago, that approach was rare even for kids who were looking to impress someone.

It seems as though things have changed, however.

“I have mixed feelings on it,” Hoenstine said. “Travel ball is great, and it gives players a chance to see good competition. My own children do it, and a lot of our players at Central do it through Flood City, which does a very good job. They get kids seen. Colleges don’t see high school games. They can’t afford to send people out to them.

“Social media now plays a big role. I send video to coaches. I counted nine guys in the Mountain League alone going to play in DI.”

Though many players are getting a chance to play out their Division I dreams, it isn’t with a full ride through school.

“There’s so much competition,” Hoenstine said. “Each power five school has 11.7 scholarships to give out, and they want all kids committed by end of their sophomore year. Paxton Kling just finished his freshman year at Central, and he’s getting looks from over 20 power five schools. I do think travel ball has played a big part in advancing the process. There’s not a whole lot of money in scholarship baseball. They are splitting their money from 11.7 scholarships over 27 players. It can be a tricky situation.”

Playing in showcases all across the country in these programs can get pricey, especially considering the ultimate payoff still will require more money put into a college education. That makes the process something that certainly isn’t for everyone. There are still plenty of kids reveling in a George B. Kelley Federation title or embracing each other after a big local Legion game win.

Those experiences are important, even beyond baseball.

But no longer is the player who opts out of that environment looked at as an outsider, as Mark Helsel said his son was around a decade ago.

Michael Boytim can be reached at mboytim@altoonamirror.com or 946-7521.