Pirates, and everybody else, in contention in NL Central 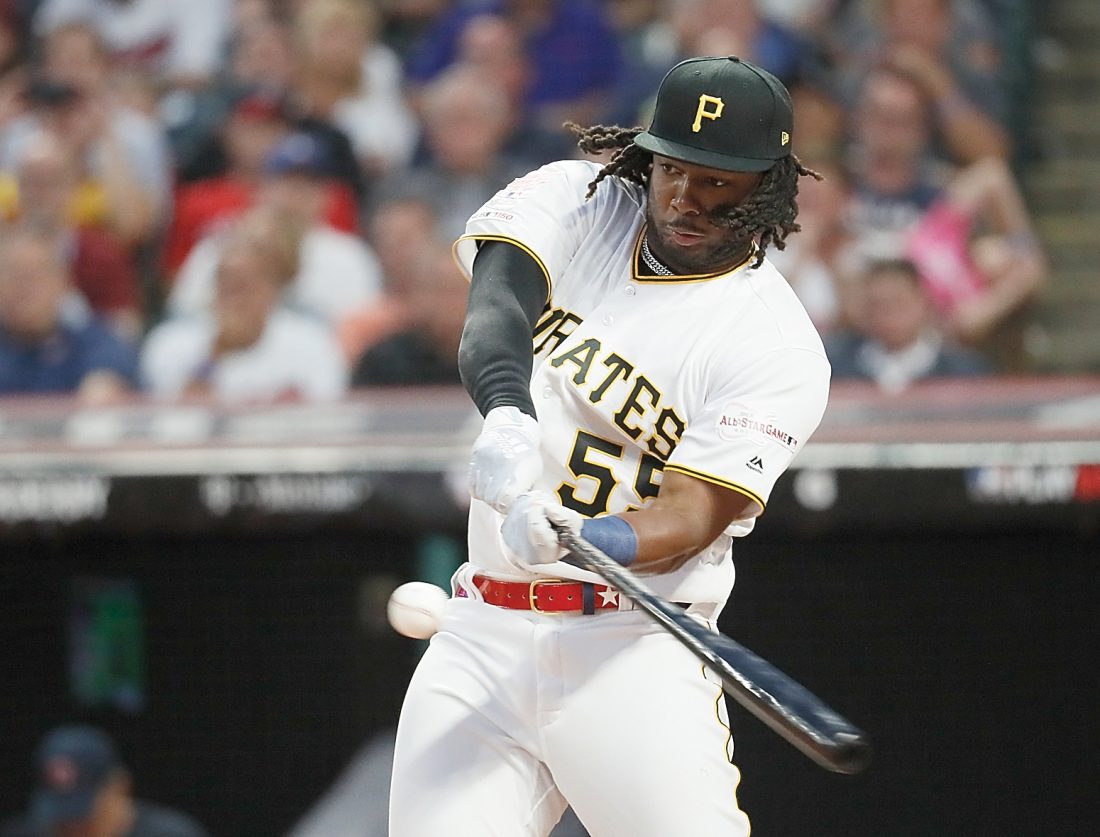 The Associated Press photos Josh Bell had a monster first half for the Pirates with 27 home runs and 84 RBIs while batting .302.

Notes and observations about Major League Baseball at the all-star break:

A hat can be thrown over all five teams in the National League Central Division, and that’s great news for the Pittsburgh Pirates.

The Pirates entered the all-star break one game under .500 at 44-45, but they’re in fourth place in the division, just 2¢ games behind the division-leading Chicago Cubs (47-43), who the Pirates play in a key three-game weekend series at Chicago’s Wrigley Field that begins Friday afternoon.

The Pirates are fortunate in other ways, too. They’ve endured losing streaks of eight games and seven games, and they had a Major League Baseball-high 22 players on the injured list before Memorial Day. Included among them is ace right-handed pitcher Jameson Taillon, who has been sidelined since May 1 with a right elbow strain. Taillon isn’t expected to return until mid-August at the earliest, and it’s not inconceivable that he could miss the rest of the season.

But the Pirates, who have won 14 of their last 21 games since June 14, have shown collective fortitude and benefited from a breakout, career year from all-star first baseman Josh Bell, who leads Major League Baseball in RBIs with 84, and has also clouted 27 home runs. The Pirates have also received outstanding offensive production from two rookies — outfielder Bryan Reynolds and shortstop Kevin Newman — who weren’t in the team picture at season’s outset.

Reynolds leads all MLB rookies with over 60 games played in batting average (.342), while hitting seven home runs and driving in 33 runs since injuries in the Pirates’ outfield necessitated his April 20 call-up from Class AAA Indianapolis. The switch-hitting Reynolds put together batting streaks of 17 and 11 games. Newman has a .326 batting average with six homers and 33 RBIs, and had a team-leading 19-game hitting streak to his credit. Newman wasn’t the Pirates’ starting shortstop at the start of this season, but has played himself into the position, batting in the leadoff spot in the lineup though most of the past seven-plus weeks.

Second baseman Adam Frazier and center fielder Starling Marte have also gone on recent hot streaks at the plate for the Pirates, who have assembled a formidable batting order that currently doesn’t have an apparent weak spot. Veteran Melky Cabrera, an offseason acquisition, has also chipped in nicely at the bat after seeing more playing time than originally anticipated due to the Pirates’ early-season outfield injuries.

The Pirates’ pitching was expected to give the team a chance to contend in 2019. Instead, it has been their hitting that has helped the Bucs get back into the thick of both the division and Wild-Card races. Over the past 21 games, the Pirates have scored a total of 136 runs, averaging nearly 6¢ runs per game.

On his weekly radio segment recently, Pirates general manager Neal Huntington characterized the Central Division as a collection of “good teams who beat up on each other,” rather than classifying the division itself as mediocre.

That said, there are no teams in the division that trigger the awe that’s brought on by the Dodgers, who have 60 victories at the season’s mid-point.

Nonetheless, a cramped, up-for-grabs NL Central in which 85 victories might win the division championship this year, will make for a very interesting second half of the season.

n The recent death of 27-year-old Los Angeles Angels’ starting pitcher Tyler Skaggs, unbelievably tragic though it is, may galvanize an Angels team that has been mediocre through the season’s first three-and-a half months. United in their grief and devastation, it wouldn’t be surprising — and indeed, it would be quite gratifying — to see the Angels play with a renewed sense of focus in the second half of the season in honor of their beloved fallen teammate.

n Among the biggest names on this month’s trading block will be San Francisco’s former left-handed pitching ace Madison Bumgarner, who was a huge part of the Giants’ World Championship teams in 2014 and 2012, and also won seven games for the Giants’ 2010 World Championship team. The Giants are buried in last place in the National League West Division, and Bumgarner will be a free agent at year’s end. Milwaukee is among the teams with the most interest in Bumgarner. He would fit in nicely, since there is a sharp dropoff in the Brewers’ rotation after their top two starters, all-star right-hander Brandon Woodruff and veteran righty Zach Davies.

n The New York Mets have had an unremarkable season, which has somewhat overshadowed the accomplishments of two outstanding young players, rookie first baseman Pete Alonso and second-year outfielder/infielder Jeff McNeil. Both were National League All-Stars this year, with McNeil’s .349 batting average leading the league, and 2019 All-Star Home Run Derby champ Alonso’s 30 first-half homers ranking him tied for second in the NL in that category.

n An interesting item in the Mirror’s Associated Press Yesteryear section recently informed that the late Tony Cloninger was the first Major League player to belt two grand slams and drive in nine runs in a single game. Even more amazing is the fact that Cloninger, who accomplished the feat for Atlanta on July 3, 1966 against the Giants at San Francisco’s old Candlestick Park, was a pitcher. Further research confirmed that Cloninger’s nine RBIs are still a single-game record for a Braves franchise that has boasted several Hall-of-Fame position players, including one of the game’s most prolific home-run hitters, Hank Aaron. Also in 1966, Cloninger pitched the first game ever played in the old Atlanta Fulton County Stadium, working all 13 innings of the season opener that year before giving up a game-winning homer to the late Pirates’ Hall-of-Famer Willie Stargell.

My, how the game has changed.

John Hartsock can be reached at jhartsock@altoonamirror.com